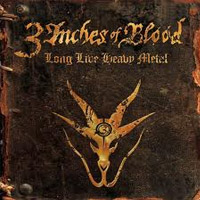 3IoB’s fifth album might carry one of the metal world’s unimaginative album titles, but thou shall not make any hasty decisions about the album itself. At some point in a band’s career there is a time to name an album like this. 3IoB has always been a band with no bullshit, just straight-in-your-face heavy metal, and “Long Live Heavy Metal” is no exception. The album starts with an instant classic “Metal Woman”. You hear the Accept-influences, and are ready to pound your fist and sing along the chorus over and over again.

If Rob Halford wasn’ t already called “Metal God” he would probably be “Leather Lord”. This particular song kicks your face like a ton of bricks and makes you want to hear more. Maybe Cam Pipes should be named after this song? Even though 3IoB is probably one of the best original metal bands around these days, I can’t imagine the band without Cam’s original sound. He growls and screams through every song like no one else.

There are some really cool acoustic parts in this album. “Chief and the Blade” has a groovy tone in it, and it works as an excellent intro to the next song “Dark Messenger”, which also starts acoustically and is one of the finest tracks on the album. Other stand out tracks here are “Look Out”, “Leave it on the Ice” and “Men of Fortune”. All in all, the album works well as a whole.

“Long Live Heavy Metal” ends acoustically with a beautiful, heroic and majestic outro “One for the Ditch”. It works perfectly even without Cam’s superb vocals.

It is hard to pin point any weaknesses in “Long Live Heavy Metal”. 3IoB know their business: how to write metal songs and how to satisfy even the most critical metallers. This is a pure metal album. I hope 3IoB can carry on the same aggression and professionalism in future. This one lives really long!

Graphic designer, webmaster and contributor at the Steel Mill.