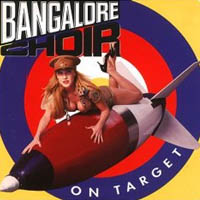 Strap on your seatbelts and settle in for a ride in a heavy metal time machine; It’s time to delve into the past and dig up another lost album for a Steel Mill review treatment!

The year is 1992, the album entitled “On Target” and the band behind it called Bangalore Choir. Bangalore what? If the name doesn’t ring a bell, don’t be alarmed. There aren’t any huge gaps in your knowledge of heavy metal history nor has this reviewer finally lost the last bits of his flickering sanity (at least I hope so, but guess you’ll never know…). As Bangalore Choir surfaced with their debut album, they vanished just as fast from the music field with no trace and no legacy to left behind.

That is, no legacy but their album, of course. As the album found, by a freak chance, it’s way to the hands of Steel Mill’s reviewer squad it caused a couple of strong reactions. First of these was that of a pleasant surprise – “On Target” turned out to rock very nicely. The second one was a feeling of amazement; listening to the record it seems quite strange how Bangalore Choir never got their break with an album as strong as “On Target” was.

Bangalore Choir had all the ingredients for a breakthrough. The album included several excellent tracks, had some songwriting assistance from already respected musicians (Jon Bon Jovi, Aldo Nova), a renowned producer in Max Norman (known for his work with Ozzy Osbourne, Savatage, Megadeth, Lizzy Borden etc.) and an excellent frontman in vocalist David Reece (that’s right, the guy who briefly replaced Udo Dirkschneider in Accept back in ’89). The rest of the band (Curt Mitchell & John Kirk guitars, Ian Mayo bass, Jackie Ramos drums) wasn’t too well known at the time, but their talent was solid. Still, somehow, “On Target” failed to gain any real notice, and despite being named after a chorus of torpedoes, Bangalore Choir went out with a whimper rather than caused any kind of a bang.

Like said it’s a surprise why the band flopped so badly, but it’s also a surprise how good an album, for a lost one, “On Target” actually is. The style in question can best be fitted into a melodic hard rock fold, in the vein of for example Alice Cooper of the same era, or bands like Hardline, Mötley Crüe, Bonfire, Bon Jovi, Baton Rouge and so on. Call it Hair Metal if you like. Reece-fronted Accept album “Eat The Heat” is musically not that far off either; Although “Eat The Heat” featured a more definite metallic edge in signature Accept riffage, one could argue it sounding sometimes much closer to Bangalore Choir than “real” Accept.

But comparisons to “Eat The Heat” are not all that fair. Where the Accept album was a controversial one and all the highlights were (at least in most Accept fans’ books) overclouded by the fact of the classic metal act taking such a different direction with such a different sounding vocalist, Bangalore Choir stood on their own with no similar burdens. “On Target” is more hard rocking metal and in my opinion this kind of music also fits much better for David Reece who does a bloody good job on the Bangalore album.

The time of album’s release is easy to place by it’s sound. Catchy melodies, easy goin’ rock groove, heartache influenced ballads and the characteristic commercial touch of the early 90’s attached to it, “On Target” presents the glam and slam on par of – depending on the listener’s preferences – best or worst of the similar artists of the time. Nonetheless it can easily be said that as far as that genre goes, “On Target” proves to be of very high quality.

There’s a good selection of songs to get your rock dose from. The opening song “Angel In Black” let’s the band show off their chops with a storming rendition of the Autograph original. More highly melodic and energetic hard rock is later served in the forms of ass-kicking “All Or Nothin'”, groovy “Freight Train Rollin'” or shamelessly catchy “Slippin’ Away”.

“Hold On To You”, on the other hand, is the mandatory ballad that let’s Reece belt out the heartfelt vocals with a skill that proves his abilities that, like said, fit very well for this kind of melodic hard rock. As the album’s “hit”, the second track “Loaded Gun” has a very Bon Jovi-sh feel to it and should the album have fared better it probably would’ve been Bangalore Choir’s breakthrough number. A music video of the said track exists, and shows the band as close to a live enviroment as is possible to witness after 15 years. Undoubtely they would’ve had the energy and skills to be a quality live band as well.

As one listens to the album, it’s a shame that the band didn’t survive longer than their promising debut. Luckily the album they left behind was very good and for any fans of quality hard rock (who can get their hands on a copy), still offers all it’s strength intact. It might indeed be a bit difficult to find, but is well worth grabbing if some old second hand record sale or a well stacked music store manages to have a copy. The sound quality, of course, would benefit for a decent remastering, but to my knowledge no such effort has been done.

So – Bangalore Choir came and went and to this day I doubt there are many people around who even know of their short existence. The band members all but dissappeared as well – David Reece gave a shot to another short-lived project called Sircle Of Silence before vanishing from the music scene, Mayo and Ramos ventured to play with Doug Aldrich in Bad Moon Rising from where Mayo continued on to Burning Rain. What’s probably my favourite track on “On Target” is the 90’s style big sounding power ballad “If The Good Die Young (We’ll Live Forever)”. A fitting eulogy for Bangalore Choir; Even if they misjudged the outcome, the history shows that they indeed were a good band that died away way too young.