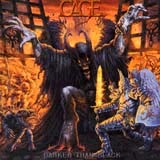 Do you like fast heavy metal? Do you like Priest’s Painkiller? Do I ask stupid questions? The album under the eye of this reviewer is called “Darker Than Black” by an american metal band Cage. A completely unknown group to me, I purchased this album based on pretty praising reviews I had read on the net. “Not just a mere Judas Priest clone” they said, “what heavy metal of today should be” they said. So, of course I had to get this – and now it’s time to spill my opinions about it. So hold on to your spiked leather pants and we shall begin.

The resemblances to Painkiller are obvious right from the start, and since this isn’t Priest next band to come to mind is Primal Fear. But although having a lot in common with the German Metal Commandos (and the like… new Seven Witches springs also to mind) Cage still has some own spices to throw in the mix.

The album is heavy, fast and furious. Screaming heavy metal played with the right attitude. The album begins with a spoken narration that leads into the track “Kill The Devil” that instantly lets you know which band/album has been inspiration for these guys – dual guitars, drumming, opening scream… very painkilling track. And a good one, mind you – one of the best on the whole album. The next song takes us straight to Halford’s Crucible – too much, in fact as the vocal melodies of “Chupacabra” are a complete ripoff of Crucible -the song. Singer Sean Peck even does a good Halford imitation, making the song sound almost embarrassingly like Crucible. Towards the end “Chupacabra” gets it’s own sound, but the damage’s been already done.

Luckily, there isn’t such plagiates amongst the rest of the tracks (none I noticed, that is), some borrowings here and there but nothing too obvious. Good fast heavy metal songs follow each other, and though it didn’t do it during first listens, the album has slowly grown on me and has started to feel better and better each time. “Kill The Devil”, “Blood Of The Innocent”, “March Of The Cage”, “Wings Of Destruction” are my favourites, although there aren’t actual filler tracks here. A ballad might’ve given some variation for the record, now it’s full steam right till the end.

The band sounds good, the dual guitars of Dave Garcia and Anthony McGinnis work seamlessly together, Mikey Niel on drums pounds like a maniac sometimes and Mike Giordano’s bass thunders nicely, not being suffocated by other players like sometimes happens. Roy Z guests on some tracks. How about the vocals then? Like said, Sean Peck has definite Halford influences from his screams to Crucible-style low vocals and even famous “Shakespearean r’s”. Copying the style doesn’t get you far if you can’t sing however – luckily Peck is a talented singer – not the caliber of Halford, but still very good. What kinda rubs me the wrong way, though, is the use of growling vocals on some songs – not during the whole song, but at some points Peck goes for a growl that fits well some points but the gurgling voice of his sounds kinda ridicilous most of the time. Well, maybe that’s just me – fans of growly metal might appreciate this more. On “White Magic” Peck brings to mind King Diamond. No, he doesn’t have a similar voice, nor does he go for high falsettos, but the insane sounding variations of voice resemble Kings schizoid style…

There’s also a bonus track, a spanish version of “Chupacabra” which is mainly just good for a laugh… if you’d ever wonder how Crucible would sound in spanish, this gives you a clue.

As a conclusion, I have to say that “Darker Than Black” might need a few good listens to have the full effect, but after that it proves to be a good album. Granted, some people would resent it because of Primal Fear-like Priest copying, but at least they’re taking from the best, eh? Nothing new, nothing extraordinary, but if you need something to Kill the Pain, this does the trick very well. Fans of Primal Fear, Seven Witches, Jag Panzer etc. should give Cage a shot.