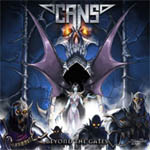 Hammerfall while being an excellent band do border on the fine line of ridiculous and genius with occasional slips into typical boring power metal mode. Little of that can be found here, except an odd moment here and there. Other than that it’s Cans’ distinctive voice which of course makes the connection. Most of the songs are mid-tempo or mid-fast which to me is a great thing. The album flows better and personally I’ve grown a bit tired to endless power metal styled double-bass drumming and lightning speed rhythms. My bottom line: “Beyond The Gates” is brilliant and i’d even go as far as saying this slays every HF record ever released, including their mighty debut!

Operner “Fields Of Yesterday” charges in with heavy guitars and right away tells you this is not Hammerfall redux! This is also a great example on how to use keyboards on a straight metal song. No “baroque-”styled neoclassical soloing, just a solid chords to back up the heavy guitars. Keyboards are clearly heard on many tracks but don’t steal away any of the heaviness. IMO, it makes the whole thing sound more powerful.

“Red Light” is the first single and video from the album and classic heavy metal with definite Priest and Accept influences but done in a right, original way. The verses also have one of those Hammerfall-moments, especially the opening few lines. Again keyboards are worked into the song perfectly.

Title track calms thing down a bit with acoustic beginning but slowly picks up pace and turns into possibly the heaviest song on the record. Like it!

Semi-ballad “The Key” reminds me of U.D.O. and Priest’s “Blood Red Skies” with its synth riffing, plus a children’s choir joins in on the awesome chorus. Melodic and haunting. Brilliant song.

“Garden Of Evil,” and “Merciless” are both kick-ass metal songs, latter has a chorus that sounds extremely familiar but I haven’t been able to point it out yet.

Opening with piano chords and featuring a melodic chorus, “Dreams” co-written by Mat Sinner and Tom Naumann (Primal Fear, Sinner), this could be my favourite song on the whole album. Sinner lays down some great bass work on this song as well. Now if only he was creating material as consistent as this with his main bands. “Dreams” is way better than anything on the last couple of Primal Fear albums IMO.

The last song is a ballad, “Forever Ends.” I don’t like the opening verses, but the song gets much better after that and once again has a catchy chorus.

Two songs co-written by Metal Mike are the “least good” here (I would not call them weakest) but only because the highlights are way up there. Overall I think HammerFall has their work cut out for them if they are going to beat this. Almost every song has a chorus and a riff that sticks in your mind long after listening. And tracks like “Red Light,” and “Dreams” are such a refreshing experience to hear. I had a similar reaction when I first heard Dream Evil’s “Children Of The Night” – classic heavy metal with killer guitars and great production. In Dream Evil’s case, rest of the record isn’t quite up to that level but on “Beyond The Gates” almost every song reaches that high standard.

Joacim Cans’ voice still remains what it is, he’s not the greatest metal vocalist ever (some guy named Rob already owns the title anyway..) but puts in a solid performance nonetheless and on BTG it sounds like he’s experimenting more than on any of the HF records. Some of the lyrics are also pushing it a little – “I move across the earth, dark shadows call my name, I am the chosen one, I am insane..” etc. But overall I think these are only minor points, the high quality of music displayed here more than makes up for that.

Production is great and clearly heavier than with Cans’ main band. A lot of thought has gone to arrangements and solos. To me this is extremely important thing – BTG is an album you return to after the first listen and pick up new things instead of listening to it once and then placing it into shelf to collect dust .

So far this ranks ( although in a slightly silent year) as my favourite metal album of 2004!