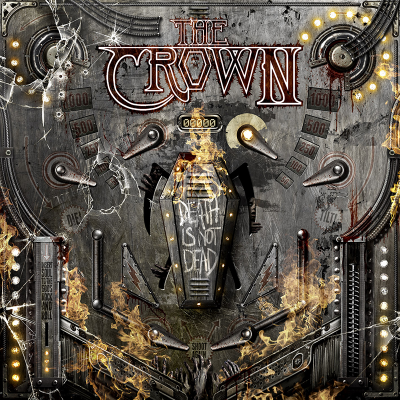 October 22, 2016 | by Ville Krannila | Comments Off on The Crown – Death Is Not Dead (Century Media 2015)
After more than four years of waiting, Sweden’s death metal pioneers The Crown returned in early 2015 with a fittingly called new record ”Death Is Not Dead.” Fans were especially thrilled to herald the return of band’s original vocalist Johan Lindstrand, for the first time since 2003’s “Possessed 13” album. The previous CD “Doomsday King” contained vocal acrobatics of God Macabre’s Jonas Stålhammer, who did a fine job. However, Lindstrand’s voice remains the sharpest sword in The Crown’s arsenal which is imminent from the first notes of this record.

Short intro ”Reign” kicks things off with a melancholic guitar melody, and its followed with proper album opener and first single “Headhunter.” It presents quite basic The Crown-formula familiar from band’s past. Melodic death metal with thrash metal overtones are still the name of the game. Lindstand screams with his usual raw style and guitars by Marko Tervonen and new member Robin Sörqvist take the song forward coloring tight rhythm. Drums pound away surprisingly played by Tervonen himself after group’s drummer Janne Saarenpää moved to work with Apple in the USA.

Same tight going continues throughout all following songs. Guitars grind away with sharp touch and guitar melodies typical for The Crown are thrown in steadily in nearly all tracks. One exception to somewhat even material comes with “Ride To Ruin,” which grooves like prime time Black Sabbath. Similar change in pace would have been great to see few more times. The songs is arguably the best cut on the album. They even cover Paradise Lost’s “Eternal” and the song blends in so well with other tracks it becomes a distinguished The Crown-tune.

The Crown continues its surefire path aided by new decade. Changes in personnel haven’t in any way affected negatively to the final product, in fact self-assurance is reflected through every note. Production on the album is first rate and those enjoying band’s music will no doubt cherish “Death Is Not Dead.” The record also improves on “Doomsday King” and Johan Lindstrand really shines on vocals. Yet the final nail to the masterpiece coffin is still not hit. Maybe next time it will be delivered. The band have announced a new album for 2017 so our sights are already set on that one.