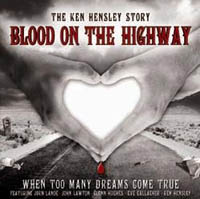 November 2, 2014 | by Kassu Kortelainen | Comments Off on KEN HENSLEY – BLOOD ON THE HIGHWAY (MEMBRAN MUSIC 2007)
REVIEW BY KASSU KORTELAINEN / NOVEMBER 2007

Ken Hensley, the mastermind behind classic hard rock group Uriah Heep’s heyday releases, always knew how to write good songs. It’s easy to say it’s greatly thanks to him that Heep ever rose to the classic status the band has held for years and years already. Although the guitars of Mick Box and legendary vocals of David Byron played a huge part in band’s early success, it was Hensley’s brilliance in songwriting that brought forth such hard rock gems as “Lady In Black”, “Look At Yourself”, “Sunrise” or “Easy Livin'” …to start dropping names with the band’s better known creations.

Though one could easily list a vast amount of excellent Hensley-penned Uriah Heep anthems, it seems almost uncanny that the man himself stayed in the band for only about a decade, parting ways after the ill-famed Conquest album in 1980. During that time Uriah Heep had released 13 full length studio albums, often a couple of releases per year – including hard rock cornerstones such as ‘Demons & Wizards’ or ‘Magician’s Birthday’ that had song after another first class material that holds it’s magic today as it did back in the seventies. And even the weaker albums include a set of great songs among the forgettable ones. All this in roughly ten years, with the majority of songwriting done by Hensley… who also released three solo albums during that period! So I guess any further proving of Ken Hensley’s songwriting capabilities at this point would be needless…

“Blood On The Highway” follows a few other Hensley solo releases of the 2000’s and as the latest few have been mainly reworkings of his previous material, the closest two comparison points in Hensley’s career would be 2002’s “Running Blind” and 2004’s “The Last Dance”. Personally I loved the first and was very dissappointed with the second, that had lost the energy of it’s predecessor and offered surprisingly tired sounding material, flat songwriting and lyrical content hailing strongly from his religious thoughts (…that I understand and appreciate are an important thing to many people but can easily turn against themself in general audience if preached out too hard).

So – as I got my paws on ‘Blood On The Highway’, the mood was very anxious, though at the same time somewhat reserved in wondering what the package might hold. But luckily finding the answer didn’t take too long. I think it was around the middle of the second song when I was convinced Hensley’s songwriting genious had not gone anywhere and the album in question was just what I had hoped. The songs rocked, moved, touched and sparkled in such a fashion that after the last notes of the CD had faded I immediately went for the play button again.

“Blood On The Highway” bears the subtitle ‘The Ken Hensley Story (when too many dreams come true)’ and indeed the album takes the listener on a journey through Hensley’s past; from the beginning to the glory days of Uriah Heep and onto the present. And – here’s the catch – though it’s a concept album telling the Ken Hensley story – the lyrics don’t rub the biography too much in your face, or underline any special events with too heavy a hand. Instead the story builds up with references, metaphores and smartly flowing musical narration that makes the concept accessible also to those people who aren’t familiar with Hensley (or Uriah Heep) history. That way the story also works on a generic level where the rock star in question could as well be anyone else. And – as opposed to many concept releases – here the songs, although forming a bigger picture, stand on their own as well, without a need not be heard in context of the full album. And so, the construction of “Blood On The Highway” is well thought of and very listener-friendly.

The new trick in Hensley’s book with this release has been the use of outside singers to carry the vocal load. Whereas Ken himself has always done the vocals for his previous solo records, this time he has opted for enlisting the skills of others. The idea turned out to be great and the cast is impressive. Taking care of most of the lead vocals we have Jorn Lande, who after working with a numerous hard rock/heavy metal bands (Masterplan, Allen/Lande, Brazen Abbott, Ark, Jorn, etc) should be familiar to most rock fans. Ex-Heep frontman John Lawton makes an appereance as well as british singer Eve Gallagher. And I’m sure mr. Glenn Hughes won’t need further introductions. Naturally, Ken Hensley himself sings also on a few tracks.

The use of multiple singers turns out to be just what the album needs to truly set the songs on fire. Hensley himself has always had a pleasant, soft and emotional singing voice that suits well for ballads but doesn’t really pack the suitable punch with songs that need more diverse or ballsy approach. On his previous albums this fact has been acceptable thanks to the well written songs, but as one listens to the singers on ‘Blood On The Highway’ the difference is still huge. A proving comparison could be made with the two remakes of older Hensley songs here – either Lande-fronted “You’ve Got It” (originally on “Running Blind”) or “The Last Dance” done by Hughes. Both versions pretty much sweep the old ones under the table. Since the Lawton-era Uriah Heep times Ken Hensley written songs have never had this strong delivery.

And as the singers do a good job, so does Ken Hensley himself. His familiar Hammond organ and slide guitar are well portrayed on the album, giving the familiar ‘Hensley touch’ to the whole package. The songwriting is again at the level the man’s respected for and the sheer brilliance of coming up with hooking, rocking and emotional melodies and arrangements is undeniable. A good example being track number two, entitled “We’re On Our Way”; Starting with Hensley doing the first verses the song catches on with the concept nicely before letting Jorn Lande take over the microphone and rocking the song to the first chorus that, towards the end features a nice idea by Hensley to tie it to the concept at hand: As Lande goes on singing “…one million miles, ten million hearts, one simple song…” a short revisit to “Lady In Black”‘s familiar chorus surfaces and leads just as smoothly to another, similarly simple yet addictive new one. Some more appereances of classic Heep are scattered among the songs, but let’s have everyone notice them themselves, I’m sure picking them out will cause some happy smiles amongst the Uriah Heep fans. And if the idea of attaching parts of old songs to the new ones sounds odd or even corny to someone, don’t worry – the trick actually works and the old bits fit to the songs without sounding forced.

Overall the flavour of the tracks on “Blood On The Highway” is set – for the most part – at the ballad/mid-tempo mode, and though the selection is very tasty, an additional rocker might’ve earned it’s place. Especially since Lande does such a good job for example the most rocking cut of the disc, “Okay (This House Is Down)”.

As said, Lande handles most of the lead vocals, and not only does he once again show why he’s one of the most respected rock/metal singers of his generation, but listening through the album it’s hard to imagine anyone else fitting better for the songs. Whether it’s the bluesy menace of the title track or in-your-face rocking ‘live performance’ sound of the aforementioned, traditional Heep-style “Okay (The House Is Down)”, Lande nails them all down 100%.

Then we have Glenn Hughes and John Lawton who both use their distinctive pipes with steel hard experience in songs that sound like (and maybe are) tailor-made for them. Just listen to bluesy “What You Gonna Do” by Hughes or spicy “It Won’t Last” by Lawton. The latter is actually one of the highlights of the album and thus made me think Lawton should’ve been let loose on another song or two as well.

Ken Hensley himself has restricted his lead vocals on the more ballady side, and he handles that side very well. And of course it’s more than suitable that the man himself has a vocal part on his own story, eh? That leaves Eve Gallagher who, even though has also a soulful and distinctive voice, doesn’t really seem to fit on a rock record but instead makes the song “Think Twice” sound more like a number from a Broadway musical. Furthermore, the couple of spoken “Doom” scenes in the middle of the songs sound more or less useless, although their obvious purpose is just to move the story forward. Whatever the case, the downsides on the album are few and slight.

As a conclusion, “Blood On The Highway” is the best Ken Hensley album since his time with Uriah Heep. The combination of fine songwriting and delivery makes up an album that recreates the best Ken Hensley magic and is an excellent hard rock record on it’s own right regardless whether you reflect it on Hensley’s past creations or not. If you like quality classic hard rock – here’s a real good one for you.