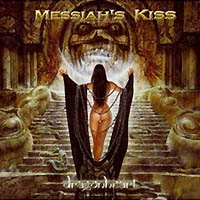 “We wouldn’t want to mix whiskey with tomato juice” states the german-based heavy metal band Messiah’s Kiss at their website, referring to their latest release “Dragonheart” and to the fact that the band’s aim is to approach metal via very strong traditional routes, doing what they do best, delivering the goods with a formula long since deemed to work.

Indeed, there’s not a slightest scent of tomatoes in “Dragonheart”. What we get is well executed, powerful and traditional heavy metal that harks back to the eighties both in songwriting and delivery. The emphasis rests on the word “traditional” – the songs are structured in a way that bears heavy resemblances to the heavy metal greats such as Priest, Maiden or Accept. The riffs, the melodies, the lyrics… it all sounds very, very familiar all the way and it would be ridicilous to even try to claim Messiah’s Kiss having some really personal aspects to their music.

But, given the elements Messiah’s Kiss has chosen to use, they’ve come up with pretty decent heavy metal. “Dragonheart” kicks off with a couple of very generic tunes, the opener “The Ancient Cries” sounds like some of the weaker moments of Primal Fear and the second track “Babylon” crashes with the cliché-ridden lyrics alone. One would think there’d be some other mystic-sounding cities of ancient times to write songs of, but sheesh, it’s always Babylon, isn’t it? Luckily, the third track “Where The Falcons Cry” redeems the album from it’s weak beginning. Pounding on in mid tempo, the song is carried with a stalwart 80’s feel and crowned with Mike Tirelli’s Dio-like vocals that suit the tune very well. All in all, the presence of Tirelli gives the band a definite leg up; as a seasoned vocalist (Burning Starr, Holy Mother, Riot) who’s singing capabilities are way above average, Tirelli manages to adjust his vocals to suit each song very well – whether it’s ballads or fast shredders.

The next track of the album sets the speed meter a few notches up as the title track of Dragonheart starts to bellow from the speakers. If the previous song was reminiscent of Dio, now the influence feeds from Judas Priest. Intense riffing by Georg Kraft and Herman Frank lay down a solid groundwork for Tirelli to spit out the lyrics in a fiery fashion, giving the song the suitable amount of high voltage. Next in line is an anthemic stomper “Thunders Of The Night” and by this point the listener should’ve noticed what “Dragonheart” album is all about: Even though it all sounds very familiar all the time, the songs work and start to drill into your brain causing the familiar foot-tapping and head-nodding, telltale symptoms of being under influence of quality heavy metal music.

The latter part of “Dragonheart” carries on in the same vein. A bunch of well done heavy songs pulsate from the speakers one after another. No song leaves an impression that it would become a metal classic or even make it’s way into your CD-player regularly years from now, but most of them still sound damn solid. The menacing heavy hitters “Steelrider” and “Nocturnal” are able to keep your blood pressure boiling while the “The Ivory Gates” hacks the album to a fine end with a melodic power-metallic pump. Not at all a bad album to listen to.

There’s nothing wrong with the idea of making traditional metal if it’s done this well. But still a little personality (if only for the songtitles alone) would be what could lift Messiah’s Kiss to truly challenge it’s nearest rivals.

Those of you who except new twists and hooks from metal bands, might find “Dragonheart” an unnecessary attempt to recycle old formulas. But for the metalheads who need a good fix of traditional heavy metal, Messiah’s Kiss’ “Dragonheart” is just what the doctor ordered. It won’t necessarily rock your world, but should be able to give your neck muscles a good workout for a couple of weeks!