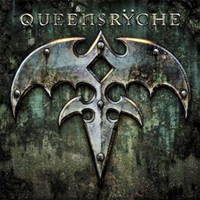 May 5, 2016 | by Ville Krannila | Comments Off on Queensrÿche – Queensrÿche (Century Media 2013)
FIRST off let’s not get into the war, which raged between vocalist Geoff Tate and his former band members. The soap opera continued for a year or so, court eventually settling on giving Geoff Tate exclusive rights to “Operation: Mindcrime” and Todd La Torre-fronted line-up could continue recording as Queensrÿche.

Operation: Mindcrime has released a solid if not spectacular album “The Key” and Queensrÿche (or Toddryche) two albums “Queensryche” and “Condition Human.” Focus now is on their first effort, which the group simply titled as “Queensryche,” most likely signalling the return back to basics. The statements from the band certainly seemed to indicate this, they talked proudly about “returning to form, “setting back on course” and “bringing back the sound we started with.”

Of course the problems with Queensrÿche don’t begin and end with bitter feud between their former singer, they are rooted with deep creative issues the group has been facing for at least 15 years prior to this. In fact ever since guitarist and leading song writer Chris DeGarmo left his position. The albums released after his departure had been mediocre at best, and seemed to be desperately struggling to find a direction.

So with certain trepidation we slide this QR-album into CD-player. First the pros: The sound and arrangements definitely hark back to classic Queensrÿche from the 1980’s. The guitar harmonies of opener “Where Dreams Go To Die” are better than anything this band has come up since the days of “Hear In The Now Frontier.” Elsewhere guitar leads and harmonies dominate, riffs in places rock heavily and overall the pace is positively quick. Compared to something like “American Soldier,” this is in places a drastically heavy album.

The album length is mere 35 minutes, with two short instrumentals and nine proper songs. This in my opinion is definitely a good thing. The quantity does not equal quality and personally I’m tired of hearing 70-minute albums with 20 minutes of good music within them. Hopefully more bands like QR and Saxon with their latest release are beginning to understand this.

Ex-Crimson Glory frontman Todd La Torre sounds remarkably like Geoff Tate of old, the powerful mid-range and soaring high notes ensure the classics are delivered with style on their live show. He is very impressive throughout this CD. For further proof, check out the previously mentioned opening track and slower “A World Without.”

Rest of the band, consisting of original members guitarist Michael Wilton, bassist Ed Jackson, drummer Scott Rockenfield and relatively new addition to the band, second guitarist Parker Lundgren all play their parts to perfection. The sound and production by long-time QR associate Jimbo Barton sounds ok, some have pointed out drums as being somehow different or lacking the needed power, but I don’t hear anything like that. It’s not breaking any new ground and it doesn’t really need to.

Then the cons: There’s basically just one, but it’s the most important. The main problem the band has been facing since 1990’s is still present. The song writing lacks that final punch and melodic intensity that came so effortlessly for them in the 1980’s. Tracks have a good drive in them, everyone plays their parts professionally and like I said before, LaTorre is simply outstanding on vocals. However, you struggle to remember any of the melodies or anything about the songs afterwards and that is definitely an Achilles heel. Repeated listening doesn’t really fix it. A song like “Redemption” sounds like vintage Queensryche with its arrangement and spoken interlude, chorus tries hard but the final hook never comes. “Don’t Look Back” kicks in with force, and LaTorre pushes as hard as he can. Once again without avail listener waits for build-up in music and melodies.

There’s really not much else to say about the album, it is enjoyable enough to erase some of the more embarrassing material the band have recorded over the previous decade from fans’ minds. However, one cannot escape the uneven core of compositions. Best songs on the album are bound to be the ones on the limited edition’s bonus CD; new live takes on three classics where LaTorre shines and the band sounds happily reinvigorated. They are playing those songs with power and conviction after many years of difficulties. The live shows have been successful so far and will continue to do so. LaTorre certainly has the ability to continue filling his role, so the shadow of Geoff Tate is not really the issue here. The creative blocks might be more serious matter to tackle on and indeed withn “Condition Human” things have improved somewhat. However if you want to get into the war between Tate and rest of the band, it is whichever band secures the services of the recluse guitarist DeGarmo, who eventually ends up the winner in this game.