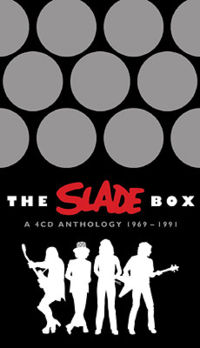 Considering the amount of success they’ve gotten in their heyday and being named as big influence for all time rock’n’roll greats such as Kiss, it’s been a damn shame that british crazee-rockers Slade seemed to had all but disappeared from the face of the rockin’ world during the 90’s and 2000’s. The band itself, of course, had basically become extinct since 1991 with only a shadow of it’s former self (run by guitarist Dave Hill and drummer Don Powell, but lacking the songwriting nucleus of frontman Noddy Holder and bassist Jim Lea) touring small venues and releasing a couple of rather uninteresting albums. But what’s worse, it has been very hard to even spot Slade albums at the record stores lately.

At the moment, though, the Slade back catalogue is being re-released by Salvo/Union Square Music and rock fans around the globe are getting a good chance to update their Slade collections or alternatively get proper introductions to this great band. As the crown of the set of new releases shines the lavish 4CD Slade anthology, simply labeled as The Slade Box.

As far as box sets go, Salvo has done a fine job putting this one together. Mind you, the term ‘box’ is a bit misleading as the anthology is more like a 72 page book crammed with an entertaining essay of the band, full (UK) discography and a bucketload of pictures displaying the band in all their whacky glory, from Holder’s mirror coated top hat and biggest sideburns in all rock’n’roll history to Hill’s ridiculous stage otfits that made the guy look more like an alien from an old b-class sci-fi movie or an escapee from the local nuthouse than a rock guitarist.

But the fancy frosting of the package aside, it’s what on the CD’s that’s the most important thing. And in that aspect the Slade Box sets a fine example of how good anthologies should be made; all the group’s big hits are there, good selection of key cuts from all their albums, and a big bunch of single b-sides to really give the box a lot more depth.

Listening all the box set albums from 1 to 4 offers a good ride through Slade’s history, from a band that was mainly doing cover versions of other artists’ tunes to early efforts of their own songwriting and onto hitting the jackpot with chart topping hits like “Coz I Luv You”, “Mama Weer All Crazee Now”, “Cum On Feel The Noize”, “Merry Xmas Everybody” etc. And that’s just CD number one! A lot more will follow as the listener is carried through an impressive amount of 84 tracks displaying the many sides of Slade; on the other hand you get a big load of rousing in-yer-face rockers like “When I’m Dancin’ I Ain’t Fightin'”, “Gudbuy T’Jane” and “Myzsterious Mizster Jones” or you’re in for a blood chillingly beautiful slow pieces such as “Everyday”, “My Oh My” or “Universe”. And that’s just the “normal” stuff. Especially the b-sides offer something completely different; there’s straightforward oldie rock’n’roll of “My Baby Left Me”, smoky lounge jazz of “Kill ‘Em At The Hot Club Tonite” and even “rap against rap” in the guise of hilarious “You Boyz Make Big Noize”. Slade never was too strict about keeping into some premeditated music direction and that really pays off in the form of these oddball tracks that really make this box worth getting even for those who already own band’s albums. Some of the b-sides suffer from a tad low sound quality, though, but not too much to take away the listening pleasure.

Listening through this compilation, one can only admire the songwriting capabilities of Noddy Holder and Jim Lea. The songs are filled with catchy hooks, killer melodies and attitude that rocks the fillings out of your teeth with each ear-piercing shriek of mr. Holder. Add to this some of the most delightful lyrics in rock and you have a pretty good idea of the recipe that made Slade. Sure, the band was more than able to make some serious and moody lyrics when needed, but the trademark ‘crazeeness’ of their songwriting was something that really added that extra good-time kick to their catalogue.

So there you have it, an excellently put together compilation of an excellent band. Much recommened for newbies and old fans alike. Just sit back, crank up the volume and wait for that big grin to rise on your face. Glory hallelujah honey I’m on fire! 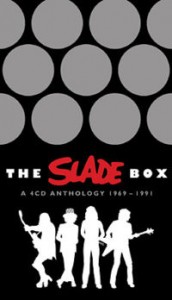