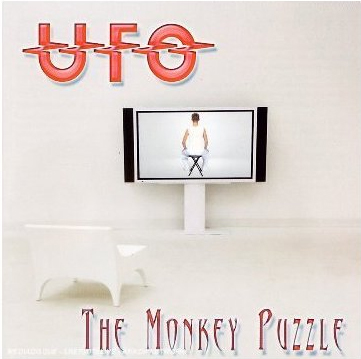 It’s amazing to think the first UFO-album was released 35 years ago. Yet here they are again over 10 years since their last of many come backs. The beginning of it saw the band triumph with 1995’s “Walk On Water” which was a brilliant return to form and in this writer’s opinion, rivalled everything UFO did in the seventies and more. Follow-ups “Covenant” and “Sharks” didn’t quite hit the same bulls eye but still offered a lot more highlights than weak moments. Personnel changes unfortunately took over after this, with on stage brawls and Andy Parker’s refusal to have anything to do with Michael Schenker not helping matters. Long-time keyboardist Paul Raymond had also walked by this point so Schenker’s decision to focus once again on his solo career didn’t come as a surprise.

For replacements (once the rights had been cleared to use the UFO-name were sorted out) original members vocalist Phil Mogg and bassist Pete Way brought in two name players, US-born guitar wiz Vinnie Moore and drummer Jason (son of John) Bonham. With Raymond returning group released “You Are Here” in 2004– solid but still somewhat disappointing effort. After touring and live DVD/CD “Showtime,” Bonham jumped ship to Foreigner and Andy Parker rejoined making this 4 out of 5 definitive UFO line-up. So expectations for “The Monkey Puzzle” were coming high and strong. Sadly, it looks like even 4 out of 5 isn’t enough in this case.

At first glance everything seems to be fine. Phil Mogg’s wistful and humoristic lyrics & unmistakable voice, Pete Way’s sometimes sloppy but soulful bass playing, tight rhythms and bluesy sound are all present and correct. Yet something is definitely missing and after two similar albums without the German guitar legend Schenker, the reason is starting to look obvious.

There are some good songs naturally. Moore does the best he can, even offering nice slide guitar during opening number “Hard Being Me.” But though technically efficient he simply does not have the same melodic touch and heart in his playing that Schenker had. Plus there’s an issue of song writing abilities as well. And while Schenker’s own output has not always been the most consistent, with UFO he always delivered the goods. Song writing here is (by UFO’s high standards) rarely above mediocre. Mogg and Way can do this kind of stuff in their sleep now but Moore (co-writer of 9 tracks here) is faced with the impossible task of trying to interpret his own style into the band’s playing and Mogg’s vocals. It all sounds a bit forced.

There are some good songs here naturally. “Heavenly Body” is heavy and grinding, Mogg hamming it up like only he can. “Who’s Fooling Who” displays the great melodies and emotions once trademarked by the British band – it’s clearly the best track on the whole album. Shame rest of it falls way too short. It’s good background music and occasionally makes you nod your head in approval, however truly excellent moments are nowhere to be found.

“The Monkey Puzzle” is not a bad album, I’d even go as far as saying it’s a good record in its own right. And certainly there aren’t many bands around any more these days doing this kind of music. For that you have to give credit to UFO’s persistence. However, compared to the previous masterpieces it fails to hit the mark by some distance. 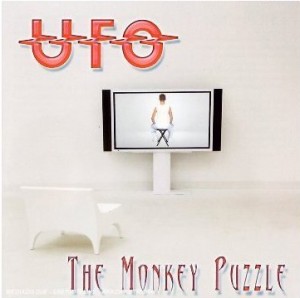