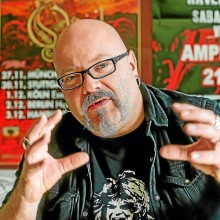 ‘Rock Hard’ – probably only a few people will disagree if I say that it is the most important metal magazine in the German-speaking area nowadays. Since starting in 1983, it has become more than just a magazine, not to say a bible, for its readers. The people working for ‘Rock Hard’ are very well-known for their honest reviews, and they are not afraid of confronting the big names of hard rock/metal with critical, yet never disrespectful, questions which most of the fans would like to ask as well. They’re authentic and, above all, they are all fans like you and me.

Now, some of you may be asking why it would be interesting to speak to a journalist. Simply because metal music would probably not have ‘survived’ the 90s without magazines like this. Where else could we have found interesting interviews and reports/reviews about bands like Jag Panzer, Riot, Vicious Rumors, Armored Saint and many more at a time when Kurt Cobain (R.I.P.) was praised as the new guitar hero?

I have been a loyal reader since issue number 37, and now had the pleasure to interview Götz Kühnemund, the editor in chief of ‘Rock Hard’. His massive contribution and efforts are certainly the main factors for the success of the magazine. So, it is time to ask Götz a few questions to get to know him a little bit better. Enjoy the reading…

Götz, first of all, I would like to know at what age you were infected by the heavy metal virus and who’s to blame for it?

I was infected by heavy metal at the tender age of nine or maybe ten. I heard some AC/DC and Kiss on the radio and discovered distorted guitars. A few years later, I found out about Priest, Maiden, Motörhead and all the other great British bands that were even better than the Scorpions, our German heroes (who were HEAVY at that time)!

Many metal fans do not only listen to their favourite music, they often pick up an instrument themselves. I know that you’re the singer, called ‘Sir Pommes’ in a band called Randalica – but is there anything else we should know about your career as a musician? Have you ever learned to play an instrument?

I picked up an electric guitar when I was about 13 or 14 and played in a band called Killer City, for a while. A great band name for a bunch of kids from the countryside, eh? Later, I recorded an album with a fun band Randalica in which I was the ‘singer’. By the way, we had a funny German version of ‘Breaking the law’…

Most of the people know you as the editor in chief of ‘Rock Hard’, probably the most important metal magazine in the German-speaking area. Could you tell something about your career, please?

I started writing for a little German fan club magazine called ‘Metal Maniacs Germany’ at the age of 16. This became ‘Rock Hard’ in 1983 and hit the newsstands in 1987. Between 1986 and 1989, I also wrote for ‘Metal Hammer’, which I quit in late 1989 to concentrate on ‘Rock Hard’. Not too much has changed since…

Everybody knows that professional musicians plan their everday life in a completely different way than I do as an office worker. What about you? Are you the rock’n’roll type of guy or a good mixture of both?

A little bit of both, I´d say. I don´t start working in the office before noon, but I often sit in front of my computer until nine or ten p.m. – or I´m watching a band somewhere. I love what I do, so I don´t care too much about freetime.

As an interviewer for ‘Rock Hard’ you have the privilege to meet different personalities and bands which most of the fans could just dream of. In some situation, are you still a bit nervous or has it become routine in the course of time? Which was the first well-known band you interviewed and how did it go?

I´m not nervous anymore as I have met all of my heroes (except for Neil Peart). They are normal human beings like you and me, some are nice and approachable (like K.K.) and some are not (like Blackie Lawless). Some appreciate me asking direct questions, some don´t… just like in ‘real life’, hahaha! The first big band I interviewed? Accept at the age of 16. They became good friends many years later! Oh, and I love Lemmy! But who doesn´t?

After such a long time as an interviewer, you probably have a list of persons you enjoy(ed) talking to. Who are your favourites for doing an interview with – and why?

My favourite persons to interview (besides Judas Priest, hehe!) are Lemmy, Steve Harris, Bruce Dickinson, Jon Oliva and many other musicians who might not be well-known at all. I don´t care if somebody is a ‘star’ or not, as long as he or she is entertaining.

The reason for the success of ‘Rock Hard’ is, in my opinion, that the team writes reviews and reports from a fan’s point of view on one hand, and on the other they do not stop when they confront some big names with quite critical, but never disrespectful questions. – I’m just thinking of Manowar and Slayer, spontaneously. How do you prepare yourself for such an interview or potential dispute?

I just say what I think. I´ve had ‘discussions’ with members of Judas Priest, too – but there was never any real trouble (not even with Slayer or Manowar…). Fans like me have their opinions – not always the same as the musicians. Our readers want to read honest reviews, not mainstream opinions!

As you already know, this interview will be published on the official website of Priest axeman K.K. Downing. Therefore I’d like to ask you about your personal experience with the band and about your opinion regarding the importance of Judas Priest for the metal scene in general.

I’ve always been a HUGE Priest fan since my childhood. The boys have released seven or eight REAL metal classics (‘Defenders of the faith’, ‘Screaming for vengeance’, ‘Painkiller’, ‘British steel’, ‘Killing machine’, ‘Unleashed in the east’, ‘Sad wings of destiny’ and ‘Stained class’) – more than most other bands around. The only other band I can think of that has released as many classic albums is Maiden! The nicest members of Priest to talk to are K.K. and Ian. They are always willing to spend a little extra time with the fans – and especially K.K. seems to be a metal maniac like you and me. Believe me, I´m not saying this because K.K. might read it!

Have you had the opportunity to get to know K.K. properly? If yes, any personal experience you can share with us?

I can´t say I know K.K. as I´ve only interviewed him a couple of times. He seems to be a really nice guy, a genuine rock fanatic – and somebody who likes to share a beer with you! (You don’t know how right you are, Götz – the interviewer!)

A couple of years ago, ‘Rock Hard’ presented the samplers ‘A tribute to Judas Priest – Vol. 1 + Vol. 2’, which mainly contained excellent versions of Priest classics. Who came up with the idea for this project? Did you use already existing cover versions or did you have to ask the bands first before sending them into the studio to record their contributions?

The idea came up before tribute albums were ‘big’. I thought it would be cool to have some of my favourite bands play some of my favourite songs in a different way, so I contacted lots of metal musicians who I knew were heavily influenced by Priest. My good friend Borivoj Krgin (Blabbermouth) helped out a lot, too. It was a real honour to have people like Saxon, Helloween or King Diamond take part in this project.

What are your top 3 Priest albums and why?

See my answer regarding the importance of Judas Priest for the metal scene. My all-time favourite Priest album is ‘Defenders of the Faith’! Can it get any better?

What are your top 3 Priest songs and why?

What are your top 3 Priest album cover designs?

’Unleashed in the East’, ‘British Steel’ and ‘Screaming for Vengeance’

Finally, I take the liberty to ask you for some short comments on the following key-words:

Maiden (my favourite band of all time… sorry!)

Joey DeMaio (he´s a lunatic – but a funny one!)

Nowadays: Alka-Seltzer. When I was younger: fight fire with fire, hahaha!

Any message for the Steel Mill readers?

Thanks a lot for this nice little interview! No matter how old you are: metal never lets you down!

November 25, 2019
7ads6x98y
We use cookies to ensure that we give you the best experience on our website. If you continue to use this site we will assume that you are happy with it.Ok