The line of people in front of the entrance to Kuopio-halli seemed to go on for ever. And though long queues at big concerts are no rarity, the very task of reaching the end of the one in question proved to be quite an ordeal in itself. In fact, had the line been just a little bity longer it would’ve gone completely around the big, ascetic Kuopio-halli sporting arena, starting from the very spot where people eventually got in.

The size of this (luckily pleasantly quickly moving) line of people added to the enthusiastic chatter of people all around was all the proof needed for the fact that the arrival of hard rock legends Deep Purple and Nazareth to the mid-finnish city of Kuopio was well-received even before the first notes of the show had been played. In fact, bands of this caliber have used to concentrate their shows to the southern parts of Finland, so also in that sense the upcoming concert was a rare treat for the local music fans. And so all the signs were pointing for a killer atmosphere during the approaching concert.

First up for the crowd were Nazareth. Personally, I was actually more excited about seeing them than Purple, if only for the fact that I had never had the chance to catch them in action before, as opposed to the numerous Purple gigs. Fanfared by the sound of skirling bagpipes, the scottish quartet marched on stage and kicked out the jams with the excellent Beggar’s Day from their perhaps most loved album Hair Of The Dog. The delivery of the song was full-steam rocking and tightly welcomed the listeners to the Naz Show. Judged by the applause, the invitation was gladly accepted. Despite of being one of the less impressive numbers on Nazareth’s latest creation, The Newz album, song number two of the evening ‘Keep On Travelin’ maintained sufficient energy level amogst the crowd and no escapees to the beer area were spotted. Still, I have to say some other song would’ve fitted the spot better… I don’t think Keep On Travelin’ left any lasting impressions for most of the crowd. 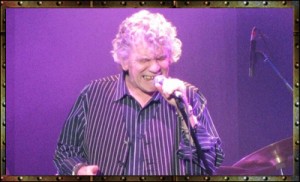 From the third track onwards, however, the going got on good tracks again. And why not, as the 1973 Naz classic Razamanaz sounded as fierce and powerful as ever before, followed by the well-executed displays of band’s more commercial (This Flight Tonight) and moody (Dream On) sides. By this time, I’m sure, even the partion of the audience that wasn’t too familiar with Nazareth were grabbed tight by the band’s diversity and especially singer Dan McCafferty’s admirable ability to fit his recognizable voice just as perfectly on croaky screamers and subtle ballads. The fans of the band, obviously, were by this time all grinning widely.

After what I personally have always considered as perhaps Nazareth’s ‘worst hit’, the trippy and annoying ‘My White Bicycle’, the band proceeded to catchy ‘Holiday’ which was followed by a step to the heavy direction; evening’s second, and by all accounts better, cut from The Newz, lengthy ‘The Gathering’ turned out to be a real heavy slab live, and as such even surprisingly good addition to the set, one of the highlights of the show in it’s menacing force. The Gathering paved way for another weighty piece, riff-laden stomper Expect No Mercy that in turn made room for the ultimate Naz classic Hair Of The Dog (with the trademark Loch Llomond bagpipe solo) and the (obvious) show closer, always as beautiful Love Hurts. 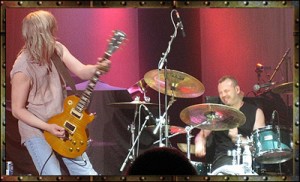 Although Nazareth’s performance was rightfully greeted with enthusiasm by the crowd, it was Deep Purple that really got them going. As Purple started their performance, the floor in front of the stage was full-packed with a cheering crowd of people, forcing me to witness the evening’s main act from a bit further distance than Nazareth’s gig. As so, my venture to have a pint of warm beer with a couple of mates during the break cost my good observation point in front of the stage. Luckily the venue was big enough to let the masses roll towards the stage and at the same time allowing a good view from further back as well. So, as Purple started to pummel the audience with their material, the sheer energy of the band spread fast all across the hall and ignited the audience with a true hard rock frenzy. Perhaps it was the fact that bands of Purple’s caliber have previously steered clear from the distant Kuopio, but the band’s effect on the usually self-restrained finnish audience caused a truly rocking response that was surprising, but of course most excellent to see.

Fireball, Into The Fire, Strange Kind Of Woman… the start of the concert was strong and addictive, even though the band has so much great material in stock that they could vary the set openers more from tour to tour. Nonetheless, the songs proceeded perfectly and the audience was enjoying every minute. As was the band, by the looks on the all-seen musician’s faces. Guitarist Steve Morse and bassist Roger Glover were fooling around on stage a lot, smiling like it was the happiest day of their lives. At the back Ian Paice and Don Airey were laying down their goods with the drums and keyboard, and all over the stage frontman Ian Gillan was jolting around in his usual amusing way, giving the audience much more to cheer about with his happy gestures and comments. 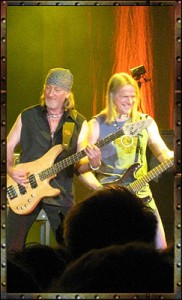 The familiar big hits of the band, as in Black Night, Smoke On The Water and Highway Star received the biggest reactions from the audience as was expected. Still, for those of us, who had seen Deep Purple in concert more times it was the rarer stuff that made the biggest impression. Unfortunately the Purple setlists have had a predictable tendency of not changing too much over the last years and even though the band indeed has a huge catalogue of brilliant songs they could choose from, the variations in their sets are nowadays regrettably scarce. So, as I speak of ‘the rarer stuff’, the expression isn’t completely accurate and refers to songs like The Battle Rages On, Mary Long, and the like. But whatever the case, when the band’s concert in Kuopio-halli reached it’s mid-point and set loose the section of the gig including Sometimes I Feel Like Screaming, The Battle Rages On, Perfect Strangers and Space Truckin’, the atmosphere Purple was creating took me over and I once again witnessed why the band has succesfully held on to their status as true hard rock giants. The musicianship, the songs, the atmosphere, the performance. Class act all the way. 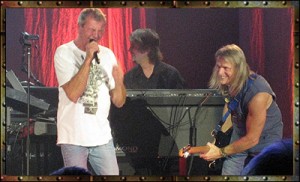 And so. Hush, Black Night and the show was over. The lights flashed back on and everywhere one could see a lot of smiling faces of all generations. Another testimony to the power of good music standing the test of time. Especially those who had never seen Deep Purple live before, were more or less ecstatic as I spoke with some of my friends after the gig. On a more critic viewing point one could sneer at the mentioned predictable setlist as well as to the huge amount of solos during the concert (not counting the solos in actual songs, but the keyboard, drum, bass and a number of guitar solos as their own pieces).. Sure, with Purple’s brilliant musicianship the solos are very enjoyable to listen to, but if you’d ask me, I’d drop a few and replace them with a couple of rare songs to spice up the setlist. But of course this is a matter of personal preference, as I know there are many people who value the dazzling displays of instrumental skills of Deep Purple almost more than the actual songs themselves.

Two classic, great hard rock acts, fine shows and an exceptionally good atmosphere amongst the crowd. As the evening’s outcome is summed together one can be very satisfied for the concert that proved these two bands being in a very good shape despite all the years behind them.