What a Wednesday evening it was when I finally got the chance to witness the supergroup known as Hail! Their European tour reached Finland with three shows and the first one was at Dantes Highlight club, Helsinki. Even though the place wasn´t excactly fully packed the band delivered an amazing show.

‘Ace of Spades’ was the grand opener for the night and what a song it is to start the party! After Sepultura´s ‘Refuse/Resist’ and Megadeth´s ‘Symphony of Destruction’ it was the time for the first Priest tune of the evening: “I see lot of couples here, this next sweet song is for all you lovers. The Painkiller!!!!” Last time I saw Ripper was in 2002 with Priest and all I can say he’s still got it and at most times has actually gotten better. The whole band was in a really good mood, throwing joke after joke. 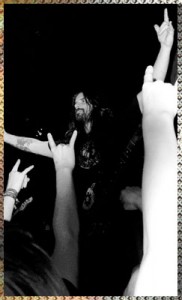 The whole show seemed more like a band rehearsal or a private party – there was so much funny stuff coming from the direction of the band. You couldn´t except what was coming next – some Pink Floyd maybe? Even Andres Kisser sang a song while Ripper concentrated on drinking his beer (or MONSTER ENERGY DRINK™).

Yet again, behind all the funny stuff you could see how hard the sudden death of Paul Grey was for the band. Hail! honoured his memory by playing a wicked version of Slipknot´s song ‘SIC’. During the evening they also Ronnie James Dio´s memory was honoured.

Earlier, before the show started, I spotted Tarot/Nightwish bassist/singer Marco Hietala having a drink at the bar. I thought he had just come to see the show, but suddenly, after spine-chilling versions of ‘Breaking the Law’ and ‘Hell Bent For Leather’, Ripper shouted Marco to join them on stage. In a very Hail!ish way they started to play something not rehearsed (‘Mob Rules’) – Ripper and Marco sang together like 37 seconds, but those were good seconds. After this, Ripper concentrated on his MONSTER ENERGY DRINK™ while Marco sang another Sabbath classic ‘Neon Knights’. It was a really good surprise and you could see how the show got even better. 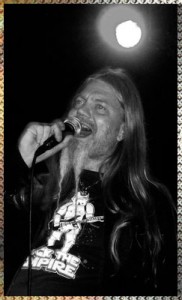 All and all there was nothing to complain. You got four amazing and talented musicians, all your favourite songs from Sepultura to Judas Priest (and ehh… Pink Floyd), really entertaining live show, comedy, drama and beer! I can´t wait for the next Hail! show, I´m so gonna be there. Like we say in Finland: “Hei, Karjalasta HAIL!in minä löysin!”…The score: 5 out of 5!

Graphic designer, webmaster and contributor at the Steel Mill.