On a VERY cold Monday evening I drove to Helsinki in order to catch one of the greatest rock guitarist ever, Michael Schenker or perhaps more famously The Michael Schenker Group – in action for the first time in Finland for nearly 15 years. Or so I’m told by some enthusiastic fans inside the Nosturi club. Compared to the Ace Frehley gig I had seen two weeks before, Nosturi wasn’t nearly as full but still there were few hundred faithful fans filling the front rows and upper bar section.

Last year MSG released arguably their finest studio effort in almost 20 years with “In The Midst Of Beauty,” a solid collection of classic hard rock tracks and fluent playing by Michael Schenker. Of course a lot of its success had to do with the star studded line-up – Neil Murray and Simon Phillips among others. However, the current touring combo is impressive as well. The original MSG members Gary Barden on vocals and Chris Glen on bass were completed by keyboardist/guitarist Wayne Findlay, who’s been with the band for some years now and legendary drummer Chris Slade. 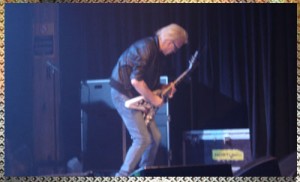 “Ride On My Way” got things started and was immediately followed by “Cry For The Nations” and “Let Sleeping Dogs Lie.” Right away I noticed the hyper cold weather had frozen the crowd as well. Only few hands at the front row were raised, I was even more worried when the band hopped into the next song, “Armed & Ready” – arguably most known of their own material. Gary Barden tried his best to wake up the people and seemed to enjoy singing even if almost no one was singing back at him. Luckily they followed “Armed And Ready” with another classic from the past, “Ready To Rock” and now we had some action going on and urged by Barden, more people joined in and sang the chorus.

Rest of the main set alternated between the MSG classics like “Into The Arena” and new stuff. “Lost Horizons” is the epic number I’ve always quite liked and gave Schenker a good chance to display his phenomenal guitar style. The main set closed with rocking rendition of “Attack Of The Mad Axeman”. A good live song that seemed to pump some needed energy into the crowd again.

Encores began with a rendition from Schenker/Barden’s brand new acoustic album “Gypsy Fever,” which I don’t have yet. “Dance Lady Gypsy” sounded pretty good and had a nice Spanish flavour. A close to 10-minute version of UFO’s “Rock Bottom” followed and Barden sang this classic faithfully, Michael’s long solo in the middle might have been a time to take a breather but for anyone who’s familiar with track’s excellent solos, must have followed closely to guitarist as he rolled out licks and bends trademarked by the man himself.

Final song of the evening was naturally “Doctor Doctor”, which is always a crowd pleaser. We got a surprise guest as former MSG vocalist, Finland’s own Jari Tiura stepped on stage and sang the song together with Barden. This was most likely totally unrehearsed as Jari seemed ready to leave the stage after singing the first verse but Barden and Schenker both told him to stay up there until the end of the song. At the end of “Doctor Doctor” the band left the stage and the song left a good taste of the show overall as the crowd was really into it, too bad it took them hour or so to get properly warmed up.

Set-list somewhat understandably was based on Barden-era MSG, with two UFO-classics slotted in. In such, this show was almost the whole “One Night At Budokan” album with few extra numbers. This for many also represented a greatest hits-type of set and certainly worked fine enough. Personally for someone like me, who’s enjoyed other eras of MSG equally much, some songs would have definitely deserved an airing. Especially those made with Robin McAuley during the late 1980’s and early 1990’s. Also something from “Assault Attack” would have definitely spiced up the proceedings even more. And as we are on a roll, where was “Lights Out?” 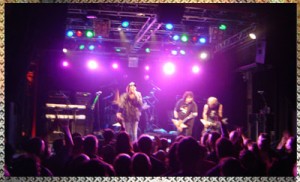 But overall this set worked fine enough and three songs from the new album were politely received, not exactly a fantastic reaction from the audience although especially “I Want You” and my personal favourite “A Night To Remember” went down very well live. Someone had criticized Gary Barden’s delivery in the usual “cannot do the high notes anymore” fashion. That might be true although I’m not familiar enough with each and every nuance regarding the original studio versions to spot any difference. He did a good job as far as I could tell.

Bassist Chris Glen had gained quite a few pounds since he last played with the band and I have to admit he looked more like a regular bloke from the pub down the street than a player from classic hard rock band. But his playing was top notch all the way and the backbone of those old MSG-tunes sounded better than ever. Slade was also excellent on drums, the man must be over 60 but he kept on pounding the skins hard and kept up a solid rhythm. And having backed up Schenker for many years now, keyboard player and occasional rhythm guitarist Wayne Findlay filled his role in the sound picture more than capably too.

Which leaves the man himself, Michael Schenker. After all the troubles from couple of years back it was great to see him back on shape, he even moved around the stage quite a bit and made contact with the audience, instead of simply standing on one spot staring down his guitar. He was smiling constantly and what’s most important, his guitar playing was faultless. It was mind blowing to hear the classic notes of lengthy “Rock Bottom” solo.

Like another classic hard rock guitar player I recently witnessed, Ace Frehley, Michael Schenker has risen from the ashes and not only released an album worthy of carrying his name but is also again playing in the level he himself set for others to follow. Hope it lasts and you do feel like he’s earned it.

• Ride On My Way
• Cry For The Nations
• Let Sleeping Dogs Lie
• Armed & Ready
• Ready To Rock
• I Want You
• A Night To Remember
• Into The Arena
• Lost Horizons
• Rock My Nights Away
• On And On
• Attack Of The Mad Axeman
Encore:
• Dance Lady Gypsy
• Rock Bottom
• Doctor Doctor