Canadian progressive rock legends Rush were one of the classic rock bands I still had not witnessed live. A lot of it was down to the fact that they had played Finland only once before, three years ago during their “Snakes & Arrows” tour. That show sold out quickly, and I didn’t want to settle for seat in the upper section so missed the chance. This time, I bought a ticket via band’s fan club from pre-sale and got excellent seating place close to the stage. This show – part of Rush’s “Time Machine” tour – sold out almost as fast as the first one. “Time Machine” – other than serving as time-off before the next studio album – is of course about playing “Moving Pictures” in complete form. Nowadays it is common for bands to do such a thing, but for Rush this was the first one. 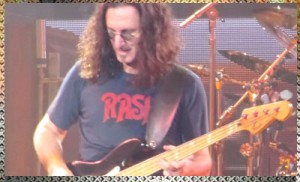 Helsinki gig was the opening night of band’s European tour. They had travelled across America until mid-April and I already checked the previous tour’s set-lists beforehand as rumours pointed them not changing anything. Rumours turned out to be right as they re-did the US set song to song. Show was scheduled to start at 7.30 PM but ran late for about 20 minutes. Then the opening intro film started and provided five minutes of amusement. Film saw band members dressed in disguise, bassist/vocalist Geddy Lee as stupid-looking bar cook, drummer Neil Peart as policeman with a moustache and guitarist Alex Lifeson as fat sausage loving customer. A funny conversation took place between them while a Rush tribute band played a strange version of “The Spirit Of Radio.” It bordered on being too long but just then the band walked on stage and kicked off with real “The Spirit Of Radio.”

With the opening track everything musically seemed to be fine but I was a little worried when Geddy Lee’s voice totally cracked on the first high parts. Luckily he did recover from this and rest of the gig went fine. The first set featured mainly new stuff with nothing from pre-1980 era. Almost all Rush albums from 1980’s got at least one song in with the exception of “Grace Under Pressure.” That one is one of my favourites so a bit of a bummer but with 20 albums, putting a set list together must be an impossible task for the band.

Highlights from the first set were especially “Marathon” and possibly my all-time favourite Rush track; “Subdivisions” which closed the set. Also great to hear were the two songs off “Counterparts” – Rush’s hugely underrated 1993 release, which is also the record that introduced me to the band. Another two songs from their most recent CD “Snakes & Arrows” got an airing and the new single from upcoming “Clockwork Angels” was played after that. “Brought Up To Believe” (or more familiar B2UB) sounded like a promising tune, it was also available from the merchandise stand as a single backed with second new song “Caravan.” Before playing B2UB, Lee announced they are close to finishing the record and will get to it once this tour is done by the end of summer. 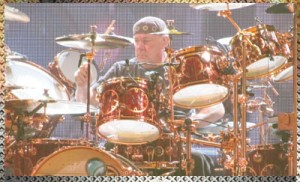 Throughout the show, songs were presented with different animations and short films rolling in the background. Smoke was used from time to time and few pyros. Also light show was very impressive. On “Marathon” Geddy sang “lucky shot in the dark” and a huge bomb went off. Nice trick that caught many by surprise.

After “Subdivisions” it was time for a 20 minute intermission. Lee announced it: “Because we are about 100 years old, we’ll take a short break.” Another movie introduced the second set and “Moving Pictures” from start to finish. If someone doesn’t know it yet, “Moving Pictures” enjoys its 30th anniversary this year. The album has also been reissued in CD/DVD/Blu-ray form, with sensational (or so I’m told) new 5.1. mixes. The first four songs from “Tom Sawyer” to “Limelight” are the rightful classics but I was mostly impressed with lesser known “Vital Signs” and “The Camera Eye” which sounded brilliant in a rare live setting. “Vital Signs” with its catchy reggae-influenced rhythm has always been a favourite anyway.

Rest of the show mixed some new songs with classic “2112” material and finally wrapping up with two encores. Second song off the upcoming record “Caravan” had IMO the most impressive background visuals and it moved swiftly to Neil Peart’s drum solo. Peart’s showcases are always very entertaining, most of the drum solos are for toilet breaks but the entire crowd followed closely this one. As usual his drum set spun around 360 degrees, and solo was concluded with a tasteful jazz improvisation. The accompanying film was a good one too, although very similar to what they have been using for the last 10 years.

Neil went for a break and Alex Lifeson began acoustic guitar solo which I knew already would evolve into “Closer To The Heart.” I expected Alex and Geddy to perform the song acoustically like they have done with other similar songs on previous tours, to give Neil a deserved rest. However, Neil returned to his drum kit after being gone for barely a minute and “Closer” was done in its original format. At almost 60, the man surely has stamina.

“2112” segment featured the usual opening cut and “The Temples Of Syrinx,” huge flames warmed the crowd in between the two. Main set ended somewhat surprisingly with “Far Cry” from “Snakes & Arrows.” The track is probably the strongest one Rush has offered during the last 15 years and also carries a commercial potential. Not something the band has built its reputation on. I liked the song and again its accompanying video, which was playing on the screen. Some pyro finished off the show and audience were left cheering for more.

Group returned and kicked off “La Villa Strangiato” – one of their classiest instrumentals from “Hemispheres.” For the first time during the show I noticed they started jamming (Rush very rarely do this and when they do, it’s always the oldest cuts). They drifted off almost into a completely different song before returning to finish “Strangiato.”

The usual “Working Man” followed and rounded the evening off, but the beginning of it was unusual to say the last. The band had totally re-arranged it into a reggae version which went on for about two minutes before reverting back to original hard rock style. Any of the songs from their early days would be good to hear as an encore but I guess “Working Man” fills the spot fine enough and tonight it sounded as powerful as ever.

Then it was all over and the band gone from the stage. The outro film had two Rush fans invading band’s dressing room, before getting caught by Alex, Geddy and Neil. The scenes were funny and showed group’s sense of humour well, it’s good they add these things since it adds to overall concert’s atmosphere.

All in all it was a great experience for my debut Rush-gig. The set list was pretty good, like I said before and almost always with a band of this stature, it’s impossible to please every fan. Personally, the absence of material from “Grace Under Pressure” and “Test For Echo” was a slight disappointment but then again, they played two songs off “Counterparts.” So there are no complaints from here.

The band all played well, some spotted mistakes afterwards and pointed to a tension in Lee’s voice but I didn’t pick up any of those after the initial vocal problems during “The Spirit Of Radio.” Few of the bands who began their careers in the early 1970’s still have Rush’s consistency on stage. From now on every tour and album must be cherished. Hopefully there will still be quite a few of them.