One of the indisputable giants of heavy metal, Twisted Sister first reunited almost 10 years ago and since then have done a handful of shows every year; all over the world, festivals and club gigs. Couple of compilations, DVD’s and other retrospective releases have been served to the public but the only thing resembling a proper studio album was a collection of Christmas classics released last year.

This latest trip could hardly be considered a tour, since it only included four dates. Luckily one of them took place in the middle of cold November rain, in Helsinki, Finland. I had previously caught TS during the Sauna Open Air Festival performance in the summer of 2006. That was one of the best gigs I’d ever witnessed due to sheer enthusiasm of the crowd and band’s over the top stage antics. That particular tour was originally to be their last in Europe, with Dee Snider confirming there probably wouldn’t be any live activity after that year. Yet here they are again.

The support act was a Swedish act called Hardcore Superstar and not exactly our cup of tea. So I and another HPH metal maniac TPV decided to spend this precious time enjoying refreshments, before the main event was scheduled to take place. We wandered closer to the stage and noticed the ice hall was barely half full, by the time Twisted Sister began their set there were still many seats empty and the upper sections weren’t even on sale. I’d estimate there were little over 2000 people present.

AC/DC’s familiar “It’s A Long Way To The Top” intro led straight into classic “What You Don’t Know” opener and right from the get-go TS meant business.

Twisted Sister remains one of the few bands from 1980’s who still look and sound almost exactly like in the good old days. With some older groups, there is a tendency to take things slower, slip in some easier notes, and concentrate on the more laid-back material perhaps. Not the case with Twisted Sister. Aside from couple of obvious wigs and increased waistlines, the band is in perfect shape playing the old classics faithfully and with plenty of power and conviction.

Guitarists Eddie Ojeda and Jay Jay French aren’t virtuosos but deliver what the songs require, drummer AJ Pero ain’t flashy but the songs stayed in correct tempo. Mark “The Animal” Mendoza is a huge figure and still pounds his instrument like he was punishing it. The overall sound picture was great, no complaints there.

And then there’s Dee Snider. At 52 he is an amazing front man, running and leaping around the stage, urging the crowd to go wilder and most importantly sounding exactly like he did in 1984. He still possesses a twisted humour and was constantly picking the people who were sitting on the left side of the stage: “Oh you people are like judges on a swimming contest, giving grades to our songs” and later in the set “In my younger days I would have kicked your asses, but now I’m older and civilized. Besides you could all be handicapped for all I know.”

The first six songs all came in a row without further introductions and all worked extremely well, it was also nice to hear rarely played “The Beast” which formed the heavier end of the set. Before “The Fire Still Burns” Dee talked to the crowd about Twisted Sister’s upcoming 35th anniversary and stated that there were still plenty of bands from that era performing at high level and making new music, Priest, Scorpions, Maiden and AC/DC were all mentioned.

“We’re Not Gonna Take It” was surprisingly heard next and everyone close to the stage was jumping up and down singing along to this anthem. After the song Dee went into a long rap about bands that always make their audience wait for the most requested number till it is finally played in the encores. “Now those who only came to hear this song can get up and leave!” he screamed. Cheers ensued and chorus was sung one more time.

Whether the Christmas album was a worthwhile addition to Twisted Sister’s catalogue is debatable but like Dee himself said: “We felt like we had nothing to lose.” Thus they launched into “I Saw Mommy Kissing Santa Claus” with altered lyrics; kissing got substituted with blowing and everyone had a good time.

The set was back on track with another rare gem “I Believe In Rock’n’Roll” and one of the definite highlights: excellent rendition of “The Price” which was dedicated to all victims lost in recent high school massacre in Finland. Cigarette lighters and mobile phone screens could be seen all over the hall during this track.

“Burn In Hell” is one of my personal favourites and great to hear once again, Dee bathed in red devilish light at the edge of the stage and people seemed to be really into this song. AJ’s brief drum solo followed, some people left for bathroom but I don’t think they made it that far as drum solo lasted barely a minute. The main set was concluded with “I Wanna Rock,” Dee charging around the stage like a maniac, inviting people to sing the word “rock” over and over again.

Encores were short and to the point. “Come Out And Play” is another favourite of mine and the usual “S.M.F.” closed the evening. Between those songs band introductions took place with Jay Jay also talking to the crowd for a long time about past and present, their tour manager was invited (more like forced, with Mendoza dragging him from the arm) to the stage and crowd gave him a standing ovation for bringing Twisted Sister back to Finland. Jay Jay stated there could be more shows in the future but nothing about a new studio album was mentioned and sadly it looks very unlikely to happen. The band took their bows and audience rewarded them with cheers, however one is left with a feeling that were there some new product and proper marketing available, the halls would fill up easily. The last TS album was released 20 years ago, yet it was nice to see some faces in the audience who were obviously not even born when “Love Is For Suckers” closed the first chapter of the band. 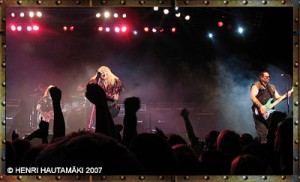 Anyways, this was one of the greatest metal gigs I’ve personally seen and despite the small crowd, the atmosphere never dropped thanks to five professionals on stage. Maybe it is the relatively small amount of concerts that the band plays, which enables them to always stay in top form. Regardless of our wishes for new studio material, live they clearly are still one of the best attractions in the metal field and long may it continue!

• What You Don’t Know (Sure Can Hurt You)
• The Kids Are Back
• Stay Hungry
• The Beast
• We’re Gonna Make It
• You Can’t Stop Rock’n’Roll
• The Fire Still Burns
• We’re Not Gonna Take It
• I Saw Mommy Blowing Santa Claus
• I Believe In Rock’n’Roll
• Under The Blade
• The Price
• Burn In Hell
• Drum Solo
• I Wanna Rock
Encore:
• Come Out And Play
• SMF