December 7, 2007 | by Kassu Kortelainen
Text and pics by KASSU KORTELAINEN

A jazz festival doesn’t really sound like a place where one would go to hear some quality hard rock music. All respect to jazz, but when one wants to pound his fist in the air to killer riffs and join in to massive crowd-shaking choruses, an average jazz gig doesn’t quite do the trick. At least I would imagine so… haven’t really tried jumping around in the front row of a show in some smoky jazz lounge, frantically giving my air saxophone a mean treatment. So pardon me if I’m wrong.

But in this jazzfest there was a catch. Thanks to the organizers’ much welcomed idea, one night of this year’s Keitelejazz festival was dedicated to rock. Enlisting the services of hard rock legends Uriah Heep, this mid-finnish festival succesfully widened itself to a large audience ‘cross the boundaries of jazz and allowed more people to experience the cozy atmosphere of the quaint little festival.

Jumping in my car and taking an hour and a half drive in a bit cloudy but warm summer evening, I arrived to the small town of Äänekoski, located in central Finland close to the bigger city of Jyväskylä. Approaching the town in the rays of still lingering evening sun, I easily found the festival area and took notice of the pleasant setting of the night’s event. The main stage of Keitelejazz had been set inside a lofty tent just at the banks of small idyllic Äänejärvi lake, while some more stages were spread across the town’s center – quite interestingly and unlike on most music festivals. The central city stages, I learned, had no entrance cost and mainly featured lesser-known bands, while the main tent was the place for the actual big guns of the night. Since the concerts at the free areas had already ceased, I grabbed my camera and headed straight to the main area.

My timing couldn’t have been better. Just as I entered the tent, evening’s first group the Daltons had just took the stage and were delivering their goods to the still quite scarce audience. A finnish band that featured nationally very well-known musician Pave Maijanen as their frontman, the Daltons turned out to be surprisingly solid rockers that displayed both talent and attitude that slowly but surely started to draw more people to the front of the stage from the more farther beer tents as the show carried on. The band’s setlist consisted of old rock classics ranging from Chuck Berry to Jimi Hendrix and throwing in some classic finnish rock tunes every now and then. Maijanen in particular was in very energetic shape, flailing his guitar all over the place in a true rock’n’roll fashion and belting out the vocals with raw power well worthy of the songs’ classic status. 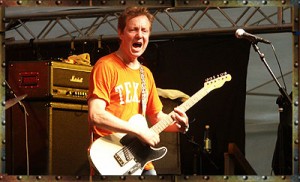 After the Daltons had exited the stage, people pulled back to the beer tents (that in the typical finnish way were probably bigger than the main tent itself) and the concert tent grew silent. Admittedly I could’ve used a cold beer or two myself, but knowing I had to drive back home after the show I decided to settle for a pint of water. As I was sipping my watery brew, I noticed that oddly enough nobody was arranging the stage ready for the next band. Maybe it was a cunning ploy to make people bring more Euros to the beer tents or just some less sinister arrangement, but nonetheless the wait begun to wear the audience down to some degree. A lot of snappy comments were heard and I have to admit I concurred to the boredom of standing around in an idle anticipation. Finally after an hour or so, the stage lights started to shine again and the next band climbed on stage.

It was time for the Pirates. Another old rock band considered as legends of their style and apparently very warmly welcomed by a bunch of fans gathered at the front rows. I myself wasn’t too familiar with them per se, but as they proceeded to play their more famous songs such as ‘Shakin’ All Over’ or ‘Please Don’t Touch’ (which I only knew from the Motörhead/Girlschool cover, though) I started to catch up. The band played undeniably solid, rootsy and bluesy rock’n’roll but for me personally the gig was a bit dull. The stage energy so strongly present during the Daltons gig was now limited to drummer Mike Roberts’ intense pounding and from my point of view setting the two warm up bands of the night in reversed order would’ve worked better in the big picture. That said, however, it was obvious that a lot of people, especially the large amount of band’s fans, were enjoying the gig immensely. So obviously a good addition to the festival, all in all. 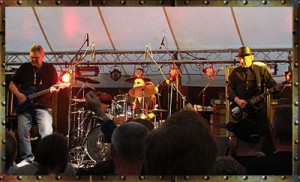 The wait after the Pirates was again rather long, but this time the rush to the beer tents was very much milder. It was obvious who the people had come to see and already when the Uriah Heep technicians emerged on the stage to set up the band’s instruments, huge chants of “Heep! Heep!” started to shake the tent. Maybe the thick anticipation of the constantly growing crowd speeded things up a little, since this time the wait didn’t turn out to be quite as long as before. Roughly about 45 minutes since the Pirates had left the stage, lights flashed on again and Uriah Heep marched on stage. 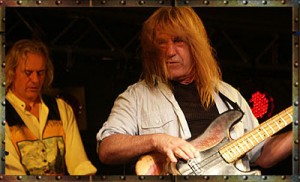 The crowd was cheering loudly and the band responded with power. Storming rocker ‘So Tired’ from 1974’s Wonderworld album kickstarted the show and unlike the song’s title might suggest, there were no signs of fatigue neither on or off the stage that night. Approaching the audience with a sly smile, singer Bernie Shaw waited for the last notes of So Tired to fade and gave the audience a tongue-in-cheek warm welcome; “Welcome to the jazz festival eveybody! We could play you some jazz but would it be okay if we’d give you a rocking Uriah Heep gig instead?” Shaw proposed, and was greeted in return with a roar that marked the question properly answered. Swinging the micstand around a couple of times, Shaw bowed acceptingly and Uriah Heep blasted forth another stomper, this time hailing back to year 1989; Cry Freedom from the bit underrated Raging Silence album. 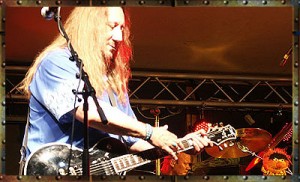 The show carried on with a good selection of Heep songs. Personally I could’ve used one or two more surprises to the setlist, but given the nature of the festival that had brought more fans of hard rock in general than actual hardcore fans of Uriah Heep to the tent, the more hit-balanced setlist was a good choice. At least the crowd got a good workout and enjoyed every second. And talking about surprises, John Lawton -era songs – classic ‘Free Me’ and ‘Falling In Love’ with it’s brilliant vocal harmonies have not been that regular visitors in Heep setlists during past few years anyway. 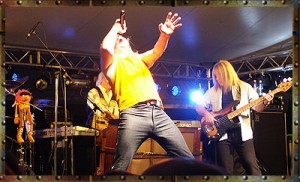 Bernie Shaw kept his jolly interaction with the audience going on during the whole show and jumped around the stage in fashion that leaves many other frontmen of today in shame. Most remarkably – of course – Shaw once again proved himself to be an excellent vocalist in his own right, varying his performance from softly sung ballads to highpitched heavy metal screams. 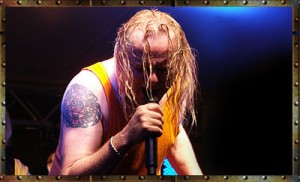 “Mr Heep” Mick Box was smiling widely through the gig, seemingly enjoying to play all the songs for the gazillionth time and really got the audience going with his classy solos and signature hand wavings. Keyboardist Phil Lanzon and bassist Trevor Bolder kept more to the background most of the time but whenever the songs needed a moody keyboard solo or some frantic bass lines the two Heep stalwarts stepped up with style.

A special mention has to go to Uriah Heep’s new drummer Russell Gilbrook. Him having replaced long-serving Lee Kerslake behind the band’s drumkit just a few months back, I was anxious to see how he’d fit in. But if anyone had questions or doubts before the gig, they were all hammered away by the the time the concert ended. Gilbrook had strapped the mad drummer-puppet Animal of Muppet Show to his drums, and as the show went on the metaphor became obvious. The charismatic drummer was pounding his instrument like a true madman, often not keeping himself seated but jolting up and down like a bald, tattooed jack-in-a-box. Gilbrook’s playing left no-one cold and besides his fiery stage presence his talent and skills were undeniable. Although Lee Kerslake remains without a question a much loved and big (no pun intended) part of sound and personnel of Uriah Heep, the band can congratulate themselves for an excellent replacement. 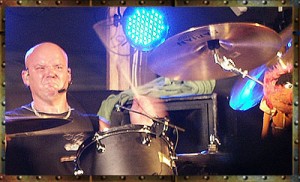 So, after two pairs of encores, loud applause and a gargantuan mass-chant of the familiar chorus of Lady In Black that probably woke up every single sleeping inhabitant of Äänekoski, the Uriah Heep’s gig and the rock evening of Keitelejazz came to an end.

As I was walking back to my car in a sea of happily smiling concert audience and some even more happily smiling but a lot less straight walking beer-tent dwellers, a lot of positive comments were heard from every direction. Heading for my car I couldn’t help but concur. Now that was a jazz festival for my liking. 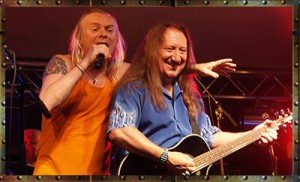