FORMED in Sweden towards the end of 1990’s, Watain are one of the most popular black metal bands of today. A highly controversial band, based on their strict statements and other non-musical factors. Some claim Watain have compromised themselves by making their music appeal to more of a mainstream audience. If one ignores these “grievances”, the group has still made five albums which rank considerably higher than the average.

Warm-up act was another Swedish doom act In Solitude, but this one I consciously passed and arrived at the gig roughly 15 minutes before Watain were scheduled to begin. A short sound check gave a hint of what was to come, drums blasted like a machine gun and guitars were really scraping, if slightly fuggy. Atmosphere at Nosturi was magical, as the scant looking audience started to move towards front of the stage. Curtain was closed, but crossed turned upside down glared both sides of stage. As the intro began, curtain dropped and members of Watain stepped out like undead Zombies. Candles and the logos of the band were lit and show was well on its way. The masks and dressing up of various band members really impressed, also the scent of incense hanging in the air had its effect on your headspace. Vocalist Erik Danielsson writhed on stage like a man possessed by demons, living out the music passionately. 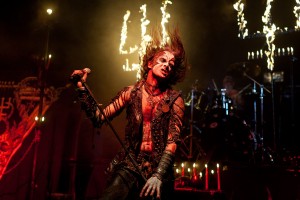 The set list was focused on the newer material, but tasters were given also from older classic albums. Disappointingly from (generally regarded as the greatest Watain- album) “Casus Lucifer” only “Devil’s Blood” was played. During this song the crowd received devil’s blood on their faces by the singer. The new tracks were yet more unfamiliar territory for myself, so parts of them passed without much notice. “Malfeitor” and “Total Funeral” from “Lawless Darkness” were played great and aroused slightly tame audience from their sleep. Watain gave a professional and clear performance where their live show should be a lesson to other bands. Pointless banter remained in minimum, no one really wanted to hear that stuff anyway. The feeling would have been even better, had there been a bigger audience present.

The acoustics in the club were ok, although occasionally the music sounded a bit muddy. The show lasted roughly one and a half hours, which was appropriate. The final number “Waters Of Ain” brought the night to a close. This was also delivered with a tone that remained finest of the set.