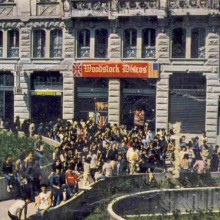 DEFENDER OF THE FAITH FROM BRAZIL!

When did you first start listening to Judas Priest?

I grew up listening to Queen, Black Sabbath and Pink Floyd because of my parents, and a friend of mine was a crazy heavy metal fan at the end of the 70s. We used to listen to bands like AC/DC, UFO and Scorpions in his house because he always had the latest releases. One day he showed us a LP from a band called Judas Priest, with a hand gripping a great razor blade on the cover, and said: “Dudes, this band rocks everything, check this out”, and Breaking the Law was playing. I was locked, shocked and mesmerized at that moment!

What does the music of Judas Priest mean to You?

The music of Judas Priest is present in my soul and in my life. It represents the centre of my energy: it’s heavy metal, it’s part of me. A pure heavy metal band, the lifestyle, the feeling that I always defend until the last day of my life. Some people might overlook me because I’m always spending time and money on my collection. I don’t care about them. I feel as an important part of the closed universe called heavy metal.

Have You ever seen Priest live and from those, what was your best experience?

I’ve seen Judas Priest 3 times: twice with Ripper in 2001. Truly amazing concerts like I’ve never seen before! 4 years later I saw them at Skol Arena, Sao Paulo with Rob. I can’t say many words about that concert because there’s not enough words to describe that!
Unfortunately I couldn’t see Judas Priest in 1991 in Rock in Rio 2 concert due to severe back problems I had. It totally frustrated me, because it was really rare to see good bands here in Brazil

What is your favourite Priest album and song?

My favourite Judas Priest album is British Steel and my favourite song is Victim of Changes. It’s the best song of all the songs that I know.

You’ve been a metalhead for a long time. How was the metal scene in Brazil when you started listening to metal in late 70s/early 80s?

Well, it was not easy. Heavy metal was an unknown universe at that time. It was very difficult to find LPs from metal bands and when I found some, the price was extremely high. At that time pop bands like Duran Duran, Flock of Seagulls and Classic Nouveaux were the sensation of the moment. So it was hard to get any information about Judas Priest, Black Sabbath, Iron Maiden and others. Although I feel lucky because my cousin used to listen to Black Sabbath and Pink Floyd, and a great friend of mine really knew about Judas Priest. His father worked for an international company and used to live in England periodically some weeks. He always brought some LPs to my friend, which I recorded on c-cassettes.

It was also very difficult to find t-shirts, patches, back patches so most of those were self made. When we saw a guy wearing a heavy metal t-shirt, we crossed the street to ask him where he got it from. Most of the times, they guy became our friend!

My mother used to work in a small shop in Sao Paulo, and one day she told me about this ‘metal shop’ called Woodstock, exactly upstairs of where she worked. We both went there, and I still remember it like yesterday: It was a 3×3-square-meter shop, with lots of picture discs on the walls, t-shirts, patches, bottoms, imported magazines, LPs, bootlegs, posters… things that I’d never seen before! Later the owner Walcir Chalas became a great friend of mine. He really brought in a lot of information about metal bands. It was amazing! I remember I skipped the Friday classes at school to go to Woodstock to watch some metal videos. We didn’t have VCRs at that time because electronic stuff was controlled by the government, so Walcir’s shop was the place! Some months later I heard about a couple of other shops specialized in heavy metal: Music House and Rockstory, but if I had to define one person here in Brazil who spread out the word of heavy metal music, it would be Walcir Chalas! 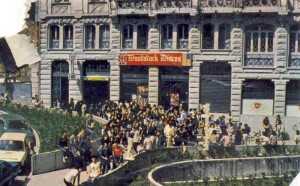 In 1982/83, the thrash, speed and black metal bands started to appear, bringing more heavy metal fans around! Metallica, Slayer and Venom were the 3 first bands known here. Exciter, Mercyful Fate, Jag Panzer, Sodom, Accept, Living Death and Running Wild followed. Two important metal magazines were established: Metal and Somtres (also distributed in Argentina, Chile and Peru), and heavy metal articles and music lyrics started to appear in traditional publications. There was also a small fanzine, called Rock Brigade, which brought info about smaller underground bands. Its first issues were printed on a plain black and white, but it contained some very good interviews. No wonder Rock Brigade became a real magazine a few years later.
Until 1985, there were no metal concerts. Iron Maiden played in the very first rock festival, Rock In Rio, in Rio de Janeiro 1985. So I traveled there, and saw also Whitesnake in their classic ‘Slide it In’ line up with Cozy Powel (R.I.P) and John Sykes. It was an amazing concert! It was the ‘door opening’ for the whole metal scene.

The first heavy metal concert here in Sao Paulo was Venom with Exciter, 10th of December 1986. The whole year 1986 was great: Sin after Sin, Stained Class and Killing Machine were released here in Brazil under the label ‘Woodstock’ (a kind of contract with CBS). I was there on the first day of the release to get my copies! Later Sad Wings of Destiny was released under the label ‘Stiletto’.

Even with all the difficulties, the 80s was amazing time! We were really a selected metal head group and we were together all the time. We just enjoyed the heavy metal lifestyle created by Judas Priest: chains, leather and studs! We were all good band supporters, and one band from this universe was… Sepultura!
I am one of the oldest metal heads here in Brazil… and I’m always so proud to be a Judas Priest fan!

You are also an owner of a nice record collection. When did you start collecting old records?

My first vinyl disc was British Steel, a Christmas gift from my mother in 1980. Rob signed it for me in 1994 when he was here with Fight. As I said, I didn’t know anything about singles, bootlegs or videos. So I remember when I found Don’t Go 7 inch single in a small shop around here… I asked the seller if it was the new Judas Priest LP and why it was smaller than the others. The seller was looking at me, static and shocked, and finally said: “It’s just a single, dude!” That was pretty funny!

I started to correspond with people overseas and there were metal fans that helped me a lot, trading singles, articles, pictures and information about the concerts. Now I have a good collection of different versions from many countries, promotional copies, numbered copies, radio concerts, books, tourbooks, t-shirts etc.

I’m really proud of my collection, and I think only a few people can understand it. I believe that me and my great friend Fabian Martinelli from Argentina are the most massive Judas Priest collectors in South America. I usually listen to my LPs and CDs even when I am studying. I like to spend hours cleaning and organizing them. I live in a small house so I change the places of the vinyls and the posters quite often.

Are there any special items, for example some rare hard-to-get releases, you consider more valuable than others?

I have a special issue (master record) of King Biscuit Flower Hour Radio concert, a program from 26/09/1982 (San Antonio gig) and one copy of Westwood One Radio Concert in 1988, with original cue sheet, both very hard to find. I think Deceiver 7” white label from Japan is one of these as well.

Here in Brazil any different pieces of the original discography is considered as a rarity. In Europe it is much easier to find rare items, but in Brazil it is almost impossible!

My Sad Wings of Destiny signed by Rob in 1994 is my personal ‘piece of gold’, I might add. This album has a great history for me: it was the 3rd album I’ve ever bought. I remember I paid 4 times the price of a similar Japanese CD (nowadays). It was money I worked hard for, assembling plastic earrings in a small factory here. I used to listen to it while I was working, and no doubt, it is the most frequently played LP in my life! Sad Wings of Destiny is definitely the soul of Judas Priest!

Your message to K.K. and the Steel Mill staff?

Well K.K., thank you very much for having me in the Fan Profile! It was like a dream come true! Judas Priest represents more than 70% of my life and most of my own personality! You are a winner, a rockstar, and for me, the definition of a true metal head! Unfortunately, I’ve never met you in person, and I hope to see you next year here in Brazil, so you can sign my Sad Wings of Destiny, the ‘piece of gold’ that I have! Long Live K.K. DOWNING!!!

To Steel Mill staff: Steel Mill is a wonderful site, you guys are real die-hard Judas Priest fans, and took a nice job! Brazilian dudes always say kind words about you all. And a special thanks to “Capitain Kimmo”, for being such great friend!

November 18, 2019
7ads6x98y
We use cookies to ensure that we give you the best experience on our website. If you continue to use this site we will assume that you are happy with it.Ok