Please tell us something about your history as a Judas Priest fan? How did it start?

I got into Priest fairly late compared to bands like Maiden and Motörhead.  I was 16 at the time, lived in a rural town way above the polar circle, so there were that many people who liked the same music, and I discovered most of the stuff through videos, soundtracks from skateboard movies and games.

I became friends with a guy from another town through skateboarding and he got me into a lot of good music, mainly Judas Priest, but also stuff like Saxon, early Megadeth and Metallica’s Kill ‘em All (as opposed to their later stuff which I didn’t like at all). Painkiller was the album that stuck to me first, but the first song I heard as Victim of Changes from Unleashed In The East, it totally blew my mind! Angel of Retribution was released the following winter, and that was the first JP album I physically bought. I got the bug, and about a month or two later, I had bought their whole discography on CD (except for the Ripper stuff, which I bought a few years later). 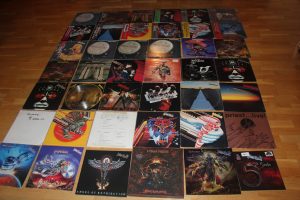 All LPs with SFV and DOTF test presses

Besides Priest, are there any other bands you like?

It’s quite varied, but it’s all mostly based around rock and heavy rock. The Ramones was the first band I got really into as a kid, other than that, I’d say the most important stuff would be Iron Maiden, first 3 Metallica, first 10 Rush, first 5 Camel, first 5 Saxon, first 3 Boston, 80s Misfits, 80s The Cure, early Slayer, early Autopsy. The list goes on, but other than the stuff mentioned, it’s mostly rooted in British heavy rock and NWOBHM – Heavy metal rules supreme! Top it off with some Swedish, east-bloc and US heavy metal, some cheesy 80s pop and movie soundtracks and I’m good. Always make sure you’re burning on Turbo Power!

You’ve been collecting Judas Priest memorabilia. Tell us something about the collection?

I wouldn’t really characterize myself as a “collector”, the only thing I consciously collect is Japanese Judas Priest firstpresses, and they’ve gotta be in good condition with the insert and OBI intact. The last of JPs albums to get the Nippon treatment was Ram It Down, so there aren’t that much to collect really, it’s just expensive! At the moment I’m still missing Priest…Live!, mostly because of how expensive it runs, but I’m also on the look for a better version of Rocka Rolla, as mine doesn’t have the OBI strip. I just had to get it when I saw it, because it’s not often you come across the Japanese one. After I get those I might just get the singles too. 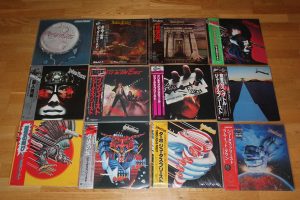 The project started out with me wanting to get the bonus 7” that was included in the Japanese pressing of Unleashed In The East (Priest In The East as it’s called over there), and I liked the look of the whole package so much I needed to get the rest of the Japanese stuff too.

I already had most of their stuff on both vinyl and CDs before this, as well as a bunch of cassettes. Some albums I have double up, because of the variety in the title or artwork, but for some reason I have several copies of Rocka Rolla, I don’t know why, but I have a hard time not to buy it when I come across it in second-hand stores. I’m still missing the Ripper stuff on vinyl, I’ve come across them a few times, but they mostly run so expensive that I’ve always prioritized other stuff. Gotta get them sometime, though! 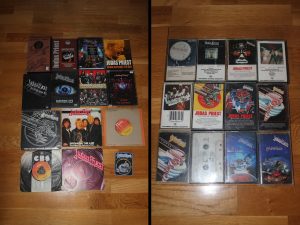 Other than that, I have a Japanese tour shirt from the Turbo era, a few vintage posters (DOTF and Turbo era) and some homemade posters, a really cool bootleg SFV poster with alternate colors and reversed print, concert VHS and DVDs, a SFV satin tour jacket, the British Steel (thanks Kimmo!) and the SFV tour book. I think that’s about it. 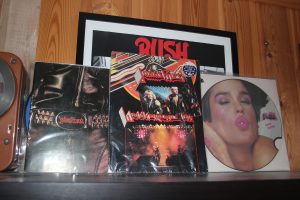 Could you name one single item you’re hunting for, or would like to add in your collection in the future?

The complete Japanese Rocka Rolla or Priest…Live! would be nice, but they’re not that rare so I might just go for the black Point of Entry world tour 1981 shirt, the one with only a small JP logo on the chest, and a cool looking logo on the back and white V-neck. I’ve seen one around on Ebay, but I can’t defend spending that much money on a shirt, even though it’s rare and looks amazing. The ultimate JP item would be that black Turbo tour varsity jacket KK wore in some of his newer videos here on the Steel Mill. Or his medallion Flying-V! The most supreme guitar in existence. 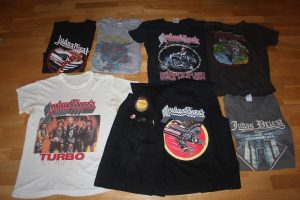 You’re also playing bass in a band called Flight. Tell us more about it?

Flight is a Norwegian heavy metal band in the style of late 70s/early 80s British heavy metal. You could say Sin After Sin has been a bit of a reference point when it comes to our riffs and production on the record. Our self-titled debut album was out in 2015 and we’re working on the follow-up at the moment.

Besides bass, you have a red Flying-V. That must be inspired by a certain blond guitarist, am I right?

You know it. The red Gibson Flying-V is the essence of heavy metal. 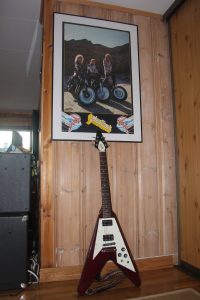 Have you seen Judas Priest live?

6 times, I think. I missed out on them on the Angel Of Retribution tour as I lived so far north and couldn’t afford a trip like that, so my first experience with the Priest was in 2008 when they were supporting Nostradamus. Saw them then again in 2009 and then three dates in a row on the Epitaph tour. It was weird seeing them without K.K., but Richie did a good job. They just gotta skip playing songs like Victim Of Changes and The Sinner without KK – they just don’t work. Nobody can emulate K.K.’s ferocity and attack. And then I saw them last year (2015), which was the best I’ve seen Halford. He was definitely killing it! And Love Bites was a nice addition to the set. 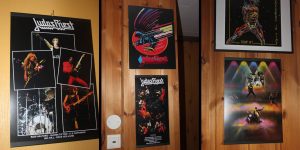 Homemade posters and a bootleg poster

The best music out there, simple as that!

That’s a hard one, I love everything from the debut up to Painkiller. I do like the later stuff as well, but you can’t beat that golden line! Nearly two decades of crushing heavy metal. My favorite album is from the 70s and starts with an “S”, whether it’s Sad Wings, Sin After Sin or Stained Class varies from day to day, but those are the ones I think are the best overall. For the favorite song I usually answer Call For The Priest, but it can just as well be Desert Plains, Beyond The Realms Of Death or The Sentinel. So much gold. Or even Run Of The Mill! That has to be their most underrated songs. KK’s solo on it is beyond amazing!

Your message to K.K. and Millworkers?

Keep up the good work and please make a lot more videos, and maybe oil up the tripod you use for filming, it’s squeaking like crazy 🙂

And now it’s your chance to ask K.K. a question…

If you could only drink one brand/type of beer the rest of your life, which one would it be?

Great question! I can only say that German or Czech beer would be my choice. 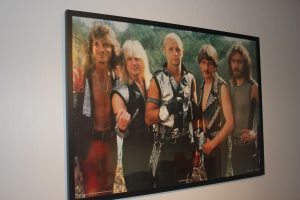