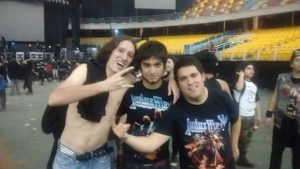 You told that you first discovered Judas Priest some 12 years ago. How did that happen?

The first time I discovered Judas Priest was with Painkiller. My father worked in a mining area in Chile at that time, and quite often he brought me some music. One day I got that album. It was a wonderful experience, never in my life had I felt that power, that feeling! One song after another, from Painkiller to One Shot At Glory.  I felt I was on a journey.

That was around the time Priest came back with Angel Of Retribution album. Was that your next step after Painkiller?

No, actually my next step was Sad Wings Of Destiny. I really didn’t believe it was the same band, it was so hard for me to believe that… despite the differences I was so amazed at what I heard: the delicacy in Dreamer Deceiver, the epic Victim Of Changes and the metal Ripper and Tyrant, it was another splendid journey!

As we know, Priest has got a huge back catalogue. How long did it take from you to go through all the previous releases?

Not so long, about a year, maybe… 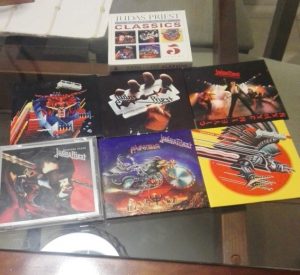 Speaking about the Priest catalogue, what do you think about the new release, Firepower? What are the standout tracks for you on this album?

I like it a lot! Firepower is so fresh and varied, and that’s why it’s so hard to decide on a favourite track, but we’ll see … Firepower, Lightning Strikes, Evil Never Dies, Rising From Ruins…

What a question, well… from all the albums it must be Sad Wings Of Destiny, because it was one of my first discoveries. From the songs,  hmmm… Beyond The Realms Of Death – but that changes daily.

You’ve been collecting Judas Priest bootlegs. Tell us something about your collection?

I have many bootlegs, I am a big collector. I have shows since 1974 until this current tour. One of my favorites is Cambridge 1978, where Savage was played!

Besides Priest, are there any other bands you follow?

Yes there are: Accept, King Diamond, Iron Maiden and Saxon. 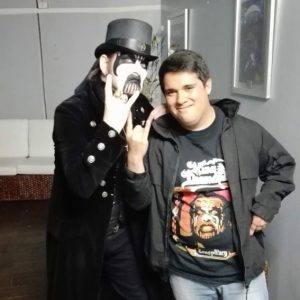 Have you seen Judas Priest live?

Two times so far: Epitaph tour in 2011, and Redeemer Of Souls in 2015, both in Chile. Unfortunately, I’ve never seen Priest live with Kenneth.

Simply my life, it’s a passion, my joy in moments of sadness, I listen to Judas Priest every day…

Your message to K.K. and Millworkers?

First of all, thank you Kenneth for the magic, for the music and the passion! And to Millworkers, big thanks for this ! I’m very happy!

And now it’s your chance to ask K.K. a question…

What’s is your favourite moment with Judas Priest? Any anecdotes?

Well, that is a very difficult question, but I will never forget the night we played Madison Square Gardens in New York on the Defenders of the Faith tour around 1984. For some reason a fan must have had a broken seat, so he or she decided to throw the foam cushion onto the stage, then soon after it seemed that everyone did the same thing, the stage became like a trampoline. We were laughing so much it was hard to keep playing. It was also difficult to move around, as you can imagine. Anyway this resulted in the band being banned for life from the venue as there was 650.000$ damage, or so they said, but we didn’t care, the fans had a great time and so did we!

Best regards to you and all of our fans in Chile! Keep The Faith! 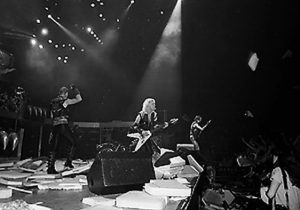