First of all congratulations for winning in the Steel Mill’s picture competition! So, what do you think about the prize, Metal for Men? How successful is this combination of heavy metal and fragrance?

Thank you very much! The prize is really cool, and I have to say that the combination of metal and fragrance is unique, and definitely a winning combo, and a fantastic scent nonetheless! 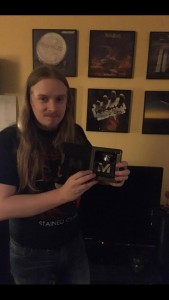 I understood that you’re a Priest fan in the second generation, and got yourself a real heavy metal upbringing?

Yeah that’s right. Me and my sister grew up in a real “Heavy Metal” home where both my parents were rock and metal fans, especially my dad who was a huge Priest fan since 1977, and he taught me pretty much everything I know about the mighty Priest, and also took me to my first metal concerts. I remember running around at home at a really early age trying to sing along to the Painkiller-album. My 2 years older sister was only able to get calm before bedtime by listening to Turbo Lover back when she was a baby!

And your father also ran a webpage for former Judas Priest vocalist Al Atkins, am I right?

Yes he did. I remember back in the late 90s, when he started the webpage. He really wanted to find out more about the early stuff, and started the page. After a while he got contacted by Al himself, who helped out with a lot of information and pictures and all. It soon became the official Atkins webpage, which my dad was really proud of!

There was a nice story attached to your competition entry, the picture of K.K. with the 13 year old Mathias… 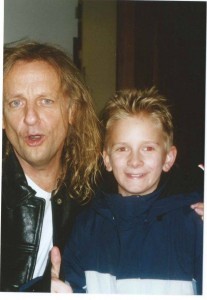 Yeah and a funny story as well! Back in 2001, me, my dad and my sister were finally going to see the mighty Priest -the first time for me and my sister. But there weren’t any shows booked for Stockholm where we lived, when the first dates for Sweden came out, so we decided to go to the show in Ronneby, which is in southern Sweden, and booked the train tickets and hotel and all. Later on, Priest announced a Stockholm show, but since the gig was the day before our train ride to Ronneby we sort of accepted the fact that we were going to miss the Stockholm show. But then out of the blue, my dad enters a Radio contest and actually wins 2 tickets to the Stockholm show the same day as the gig! So I got a chance to see the band twice, in two days! And I was only 13 years old! 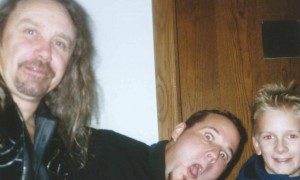 And if that wasn’t enough, after the gig in Stockholm, me and my dad also got a chance to meet the band, so I saw Priest for the first time ever, and actually met the band at the same time! 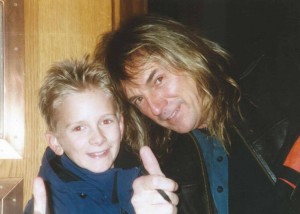 And after the gig in Ronneby, the day after, the band then recognized us at the hotel, and actually came up to us and sat with us for a while. I still remember the look on the other hotel guests faces, when Judas Priest came to talk to us! What a great memory! 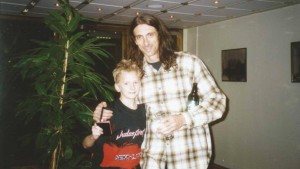 Almost exactly a year before this story, in 2000, we got a chance to meet up with the Halford band in Stockholm after my dad was able to get meet and greet passes. That was also a great experience! 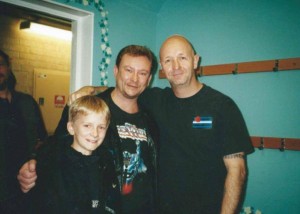 Since that, have you had a chance to meet the guys again?

Unfortunately, I haven’t had the chance to meet the guys since then, but I still hope that I can do that some day and maybe show them all the old pictures in person!

How many times have you seen Judas Priest live, and of those, what was the best experience?

I have seen the band live 13 times now since that first gig in 2001. It’s really hard to choose which show was the best. The first time is always special, and since I got a chance to meet the band as well, it was really one of the best times. But the reunion gig at Sweden Rock Festival in 2004 was truly amazing. To see Rob Halford back in the band with the chemistry and all, that surely was one of the greatest times!

You inherited the Priest collection your dad started. Have you expanded it, and what kind of memorabilia does it contain? Are there any rare, special items included?

Yes, after my dad’s passing in 2003, I took over the collection and have been expanding it ever since. I try to add as much stuff as possible, when I get a hold of it, and I have a couple of rare singles and promos from the 70s, and some posters and also some tour memorabilia from before I was even born! But I will keep adding on to it!

Tell us something about the ‘Judas Priest marathons’ you’ve been having with your friend?

Well, we are both huge Priest fans and fans of the entire catalog, both big Ripper Owens fans as well, so we got this idea of listening to every Priest album in one day. All of the 17 studio albums released, which added up to 14 hours of music! So we started planning the event and all, and actually did it the first time by chronologically listening to the albums from Rocka Rolla and onwards, and also grading each song separately to add up to a total score to see which albums had the best overall grade! After the first successful marathon, we have done the same thing 2 more times, but the second time drawing the album title from a hat so we got more of a random order of the albums, and the third time having a complete shuffle playlist of all songs.

The grades have gradually become higher each time we’ve done this, and I’m looking forward to the next marathon which should come sometime pretty soon! 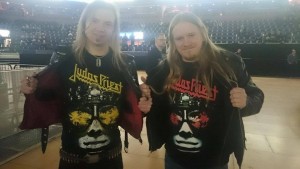 Oh, Judas Priest is really everything to me. The band I grew up listening to and still listen intensely to, and it affects me in all kinds of ways. It truly is the one thing I can always rely on, and it brings me an enormous amount of joy!

What did you think about the latest Priest release, Redeemer Of Souls? Was it included when you last time had the Priest marathon?

I think Redeemer is a great album that really shows that Priest still deliver the goods after all these years, and also an album that grows each time you listen to it! It was actually after the release of Redeemer Of Souls that we started the marathons, so it has been included!

That is almost an impossible question to answer, and when I think about it, it’s almost always a different answer! As our marathons also have showed, there are a lot of songs that are graded 10 out of 10!

But there are a couple of songs and albums that stand out, in my opinion, and that I have a special connection to, such as Beyond the Realms of Death. And Stained Class as an album is definitely one of the most underestimated metal albums of all time. But also songs like Victim of Changes, Metal Gods and The Sentinel are some of the top songs from The Mighty Priest.

If I had to make a top 5 list of albums, as of this moment in 2016, it would probably look like this:

But if you ask me the same question tomorrow it will probably look different!

Your message to K.K. and the Millworkers?

First of all, thank you K.K. for all the music and everything you have done over the years! You are and will always be one of the greatest heavy metal guitarists, and a true legend! One of the true Metal Gods!

Millworkers, you are doing an amazing job, keep it up, and thanks for being chosen for this fan profile page! A true honor!