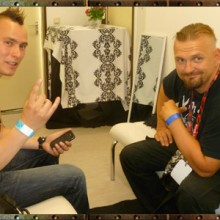 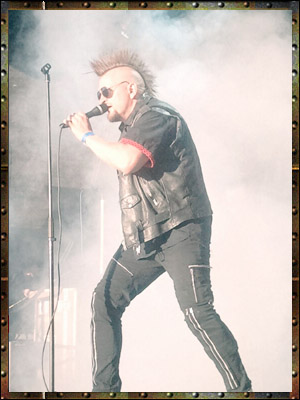 Punk and metal have been enemies and friends since the days when first punk rock bands, such as Sex Pistols, Ramones and The Clash started to praise their fast and hard-edged music. It was the late 70’s and heavy metal had just become more and more acceptable to wider audience. Many of today’s favourite heavy metal albums had been recorded, major bands and personalities had been born. Suddenly there was this angry, fast and stripped down instrumentated musical genre that pushded metal further from their audience and leaved it to lick it’s wounds. End of metal? Not in a million years. Metal survived like it did again in early 90’s when grunge music tried the same thing. It didn’t happen then and heavy metal music is still today available for anyone and it is more popular than ever.

There are many similarities between metal and punk and they both have been struggling to survive. Many metal bands love their piece of punk rock cake and vice versa. Both genres are fast, furious, angry and want to preach their anthems to true fans only. There are no posers, just honestly working musicians doing what they love.

Steel Mill got the opportunity to have a chat with a legendary frontman of a finnish punk rock band Klamydia (Chlamydia, yes the VD, you read it right). Vesku Jokinen is the singer and the only original member of this band who proudly celebrates their 25th anniversary next year. Klamydia has released 329 songs in over 20 albums. They have toured and played in Germany, they love and hail from metal, they have given shitload of money to charity, they have held the no. 1 pole in Finnish music sale charts many times but rarely been played in the radio. This time they were playing a show at Riihimäki Rock-festival in front of thousands of fans aged from 10 to 40. You could see punk rockers and metal lovers singing together (also a few Bieber fans but they don’t count). That is a wide range of audience and can be achieved only by working hard for something you love.

Next year you will have your 25th anniversary. Congratulations!

Thank you so much, I really can’t even believe we are this old – yet still so young. When we first started to play our stuff we really didn’t have any idea how long this could last. I would’ve probably laughed if someone had mentioned we would be still around in 2012. Anyway, it is really an achievement and I am really proud that we still exist. It has been a long and sometimes dirty road but also a f*cking fun one!

How are you gonna celebrate it?

We will probably have an anniversary tour with something extra happening. We are still very modest and humble guys and don’t want to make any extra noise about ourselves. We will not write a book about ourselves, it would not be appropriate to a public eye, there would be some really dirty things included (chuckles). Although we are gonna publish a new album to celebrate, it will not be a “best of” album, just a new record with this 25th anniversary theme in it.

With such a long history you have probably seen it all. How much has the music business changed from your early days?

A lot! It is completely different today than ever before. It seems that everyone is stealing from everyone. The way you create music, record it, promote it, listen to it and publish it. It is all very different and you just have to be part of it and understand it. To us it has not been that big of a problem. We have good people working for us.

Somewhere around 1990’s bands started their own record company businesses. You were also on the first wave to do that. Was it the changes in the music business that pushed you to do it?

Basically yes. Today it is not profitable to record and publish albums. People don’t buy them enough and most of them steal them from the Internet. Artists make albums just to get a reason to go on tours and get profits by touring and selling their stuff. That is where the money comes. A new album is only a business card for bands today.

It is sad, I believe many good albums will never see daylight because of this. Piracy is the main reason for all this and we have attacked against it openly. I can’t believe there are even political parties that try to justify piracy. It’s not the way it should be. It used to be a good thing to publish an album but not anymore. We realised this quite early and started our own record company and it has turned out to be a smart move. We can now control every single thing and we can do whatever we want to do. On the other hand if something goes wrong we burn our own balls.

What are your relationships to radios today?

It’s a funny thing, we have sold thousands and thousands of albums through our record company and held the number one position many times in music charts. Yet, you can’t hear radios playing our songs. It makes harder and harder to promote an album. That is where the Internet comes pretty handy, instead of being just a place to steal music, so there are two sides to it. As an artist you need to follow what happens around you. Radios don’t like to play metal or punk rock, they never had and never will.

There has always been a lot of debating between metal and punk music. Klamydia’s style hails also from metal.

We all love metal in Klamydia. Motörhead is one of our biggest inspirations. There are a lot of similarities between these two genres, we have played both metal and punk and original hard rock and you can hear it in many of our riffs. We also love bands like Priest, Accept, U.D.O. and Ozzy.

Will Klamydia ever conquer countries outside Finland? You did an album with German punkers Lokalmatadore in 1996.

Most likely we won’t conquer the world. It was a fun and great thing we did with Lokalmatadore, but like I said how it is today, it would not make any sense. No one would ever buy the music. Would be fun though but I gotta say our verbal English skills would be the first thing to destroy our career as international superstars…

As a singer you use two different kind of styles, growling and more clean vocals. In punk rock you still need to be capable to sing so how do you take care of your voice?

I need to keep my voice in a good condition, I haven’t take any singing lessons but I have my own routines how to open up my voice before the show. Actually one waitress years and years ago taught me how to do it properly, I was doing my voice opening and she yelled at me “That’s not the way to do it! You will kill your voice, let me show how to do it.”. And she did and I’ve been doing the same thing ever since. Hah, on many occasion I have recorded while being extremely drunk!

This year you play in various festivals. Right now we are at Riiihmäki Rock with a wide range of bands from hip hop to punk and heavy metal. How much have festivals changed during your career?

To be honest not much. For some reason festivals have remained the same since the early days. You get there, do your thing and leave. Especially today, when we are not so young, you don’t drink so much. Right now we have the perfect line-up for touring and playing, we all get along extremely well and I can’t imagine playing without these guys (Jari Helin, Sami Kohtamäki and Riku Purtola). I do remember some times when I really thought of quitting the whole thing. With a career this long it is inevitable to have these feelings but luckily I didn’t stop. And with this group I don’t need to. We are still having a lot of fun.

Are you still there after another 25 years?

I hope so! Why not. We will work our asses off from the cradle to the grave. It is all work after all, a fun one but still work. 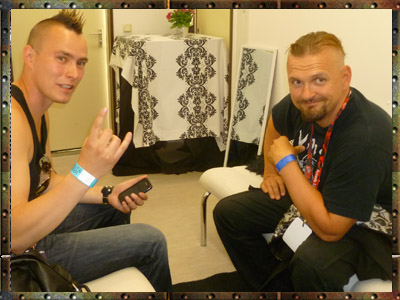