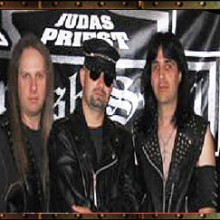 Interview By Ville Krannila / May 2010

This month sees on our tribute band section the one and only British Steel, from Albany, New York. One of the finest Priest tributes in the world they have been operating since 1999 and play a cross selection of tunes all across Priest’s career. Read on as we go through the whats and whereabouts of the band and their take on the immortal Priest masterpiece itself, the album “British Steel”.

First off the obvious question, why did you start a Priest tribute band and what does the music of Judas Priest mean to you?

Mike: I have been a big Judas Priest fan since 1980. To me they are the definition of classic Heavy Metal. I have been in many cover bands that have played some Priest tunes. In 1999, one band I was in was auditioning singers, and one singer who tried out sang the Priest tunes we were doing very well. He called me after the audition and asked me to start a Judas Priest Tribute with him. The two of us spent the next 6 months auditioning guitarists and bass players. Our current line-up includes the original guitarists and bass player from our very first British Steel gig on March 25th, 2000.

Vince: Priest was a major influence on my guitar playing style,to me,they are metal,when I think of a Heavy Metal band,it’s Judas Priest.They paved the way for all metal bands that came after them.

Scotty: I’ve been a Priest fan since the early 80’s.Screaming For Vengeance was probably the first album that I heard & was sold on the band right away.However it was the real early Priest that really moved me. Songs like Island Of Domination,Rock A Rolla,Dying To Meet You, Never Satisfied ,Victim Of Changes,etc. Once I heard the Stained Class album it just blew me away!

Andy: 1979. Stained Class was so different for the music of the times.

Vince: I’ve been a priest fan since 1980,which was the first time I heard their music.

Tim: I was always a huge JP fan growing up. They were one of the 1st concerts I ever saw (Defenders Tour 1984), and they left a lasting impression.

Mike: When I heard British Steel in 1980 everything changed.

Tim: I guess I learned by singing along to their songs and watching concert footage and studying the nuances and phrasing that Halford uses in his singing and live performance. I have never had any formal voice training. I do practice the screams at rehearsal as if I were performing live.

Vince: We practiced 6 months before our first show. We practice on our own to learn new songs, then get them tight all together as a group practice.

Andy: We always work hard to do the songs justice.

Scotty: It takes a lot of work to do a Tribute band right. There are a lot of Tribute acts out there that are musically great but they don’t have the look. To me you’ve gotta have the whole package. The music & the look, and the stage show.

Mike: Judas Priest always gives 100% live and so do we. We try to learn songs from the new Priest releases and reflect their energy level live.

What gear are the players currently using?

Vince: I use a JCM  100 watt Marshall head (1985) Marshall cabinet and a digitech Rp 350 for my effects. And Jackson Flying V guitars.

Scotty: Since we usually use back drops to cover our amps I usually just use a single SWR 212 bass cab with a Gallien Kruegger 400RB IV. There is really no need to have huge amps on stage, especially seeing that we are almost always playing places where there is a house sound guy. To get a better mix out front,it’s best to keep the volume down onstage. I am currently using a 2001 USA Fender ’62 Re-issue Jazz Bass.

Mike: Tama Drums in Mirror Chrome Finish based on the Painkiller tour, and a mix of Paiste, Sabian, and Zildjian Cymbals.

What’s the hardest Priest song to play live? Which one took most work to get done?

Mike: Paiinkiller and Exciter are my hard ones with all the double bass drumming. I had to play them very slow and work my way up.

Tim: For me, Turbo Lover was a bit tricky to get the timing down. Songs like Painkiller and Exciter present a challenge live because they can turn into a train wreck if it is a very loud stage and someone has trouble hearing all the instruments.

Scotty: Definitely a tie for Exciter or Sinner.

If you could add any song to the British Steel set, which would it be?

Scotty: White Heat Red Hot, Island Of Domination, or Better by You Better Than Me.

Scotty: We did a 5 song demo a few years ago to give to clubs & booking agents. Hellion/Electric Eye, Metal Gods, Heading Out To The Highway, Another Thing Coming, and Green Manalishi.

Mike: You can hear samples of it on our myspace : www.myspace.com/britishsteel1

Scotty: There have been so many great gigs through the years & so many awesome people that we have met through the years it’s really difficult to say just one. I’d say Magic City Music Hall in Binghamton NY was one of the great ones. It had a really great vibe. Buffalo NY gigs are always great.

Andy: Le Medley Theater in Montreal CN in 2001. Sold out show with an Iron Maiden Tribute from Montreal. We were introduced in French, and the crowd was amazing.

Mike: The shows we did in New England in 2004 to benefit the families of The Station Nightclub Fire Tragedy. It felt so good to try to help out the families that lost so many loved ones. We actually were in contact to play that club before it burned down. It could have been us in that fire.

Are there any interesting “British Steel on the road” stories to tell?

Vince: Getting stopped in Canada at customs. We didn’t have a work visa, and almost didn’t get to play there.

Andy: …then we couldn’t get home from Canada. The main bridge was shut down at 1am and nobody spoke English.

Mike: In 2002, we tried to bring our motorcycle into a basement club in Buffalo NY. You had to use an elevator to get you gear in the club. The elevator was shared by a retirement home that was in the same building. The retirees saw the bike coming in and freaked. I bet many pacemakers had to be reset that night!

Have you ever seen other Priest tributes? What sets British Steel apart from other JP tribute bands?

Tim: I saw Xciter from NYC many years ago. I thought they were awesome. I think that what sets us apart from other JP tributes is that often most JP tributes really emphasize the look of the singer, while the rest of the band doesn’t emphasize the Priest look. We try to give the fans the full package in terms of recreating the Priest experience, both visually and sonically.

Mike: I actually filled in for Xciter in Long Island when their drummer couldn’t make it and their bass player filled in for us in Massachusetts when we needed it. We are all Judas Priest fans. The thing about our band British Steel is that all the guys are great people first, with big hearts. We love what we do, and really appreciate the people that come to see us.

Vince: We wear the costumes, we do the moves, and we play as close as possible to the LP’s

Scotty: There are a lot of great Priest Tributes out there. I think what British Steel has going for it is that we try to go for both the look & the sound. The whole package.

Let’s talk about the current celebration which is of course the 30th anniversary of British Steel masterpiece, how did you end up naming the band after this classic Priest album?

Mike: Our original singer came up with the name. In the beginning it was just the two of us. The name really clicked for me because that was the 1st Judas Priest album I ever bought, and the razor blade cover is such a powerfully visual metal statement.

What does “British Steel” as a record mean to you and if you had to pick a favourite song which would it be?

Scotty: The British Steel album to me is just a great metal album from beginning to end. My favourite song is You Don’t Have To Be Old To Be Wise. It’s just got a great in your face drive & a great chorus.

Vince: It was the first real metal album of the 80’s it started it all. My fave would be Rapid fire. It’s the fastest, hardest song.

Tim: I love Rapid Fire. For me, that song is quintessential JP.

Mike: Living After Midnight. I played that song over and over as a kid, driving my sister crazy!!!

Can you remember where you were when you first heard songs such as “Breaking The Law” or “Metal Gods” for the first time?

Vince: In my bedroom. It was a local college station, late at night.1980

Tim: I remember hearing Breaking The Law on the radio.

Scotty: At a keg party. I remember going out & buying the album the next day!

Andy & Mike: We have been friends since grade school. We first heard it at the house of another of our friends from school.

Tim: We hope to see you out on the road sometime somewhere celebrating the music of the true Metal Gods: Judas Priest.

Scotty: Thanks so much for all of your support! Please pass the word & get us booked in your town!

Andy: We appreciate the Steel Mill recognizing us for what we do. Keep stoking the heavy metal fire.

Vince: Priest are and always will be the METAL Gods.

Mike: We are so grateful for this opportunity to be interviewed. We have met the real Judas Priest a couple of times and they were so nice to us. We have met so many great friends in our 10 years of tribute. Long live the Priest, and God Bless You All!!

For more info on British Steel, check out these sites:

November 25, 2019
7ads6x98y
We use cookies to ensure that we give you the best experience on our website. If you continue to use this site we will assume that you are happy with it.Ok