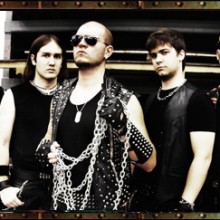 Steel Mill is happy to present Chrome Steel – a red hot Judas Priest tribute from Italy. We chatted with the band about their experiences as the harbingers of Metalgodly music. Enjoy!

First off, why did you start a Priest tribute band and what does the music of Judas Priest mean to you?

It all started from a passion for heavy metal music that has bind us together since we were 14-15 years old. We’re so happy to move emotions into long-time Judas Priest fans, but also to bring this awesome music to the ears of new generations. All in the name of passion for the Gods of Metal!

We are Priest fans since the day we born! Aahahah! The band was born as a heavy and power metal cover band in 2006, then within a year we decided to undertake this project and do the best to honor our favorite band ever. The voice similarity of our singer has certainly played a key role in the decision!

Ramon (singer) – Yeah, he is the One and Only Metal God! As for me, singing has been a passion discovered over the years and Judas Priest songs have been fundamental since the beginning! I started as an autodidact but in the last years studying has helped me a lot.

To really succeed in a project like this, and maybe a tribute in general, you first must have a huge passion for the music you play. Without it you are not credible! You have to pay attention to the sounds of every instruments (both live and studio) and to the personal playing of every musician. This takes a lot of time to be transformed into something personal, and the experience you get in doing a lot of gigs plays a fundamental role!

What “gear” are the players currently using?

The two guitarists, Giovanni (Glenn guitars) and Michele (KK guitars) play respectively on a Soldano SLO 100 clone and on a modified JCM900 Marshall Head. Both have a custom 2×12 cabinet that sound enormous! As for guitars, Giovanni mainly uses a Gibson Explorer and Michele mainly uses a standard Gibson Flying. For songs where they need a floating bridge they use respectively a Music Man JP and an ESP Horizon II.

Edoardo uses a standard Fender Precision bass on a Gallien Krueger head with a 4×10 Ampeg cabinet.

What’s up next as far as touring plans go for you guys, any shows outside Italy coming up?

Ehi guys! Yeah, you festival organizers around the world! We are waiting for you! Ahahah! Really, playing music, and heavy metal music in particular, here in Italy is becoming more and more difficult to do. We’re now trying to give priority to quality rather than quantity.

You guys play a lot of songs Priest themselves haven’t played for ages, like ”Ram It Down” and ”Jawbreaker.” What’s the hardest Priest song to play live? Which one took most work to get done?

If you could add any song to the Chrome Steel set, which would it be?

“Sinner” and “Private Property” will be the next two songs for sure!

What do you think of the classic metal scene in your home country? Any new bands coming up we should all follow?

As we said before, playing heavy metal music in our country is not the easiest thing to do. Fortunately Italy has a long history of great metal bands that continues to go live and play around the world. If you didn’t know our Ramon sings with Crying Steel also! Chrome Steel, Crying Steel, yeah he’s totally in love with every kind of steel stuff! Ahahah! Seriously, check out these guys, they are so fuckin’ cool, original Italian heavy metal music since 1982!

Yeah! We recorded 3 songs in studio, “Between The Hammer And The Anvil,” “Jawbreaker” and “Rock Hard Ride Free!” For the first two songs we have also produced two videos:

Two gigs will be immortal in Chrome Steel history! The first is a gig we did during a tattoo convention in Switzerland, on the largest stage we ever came across and with an amazing crowd full of rockin’ bikers! The second one is a gig we did in Modena at Corallo live club, one of the best live club in northern Italy! What a great night!

Are there any interesting “Chrome Steel on the road” stories to tell?

Better not saying anything about this….Ahahah! Next question?? Ahahah!!

Have you ever seen other Priest tributes? What sets Chrome Steel apart from other JP tribute bands?

We surely have put a lot of work into song’s fidelity, into searching the right sounds and playing. But we also have personality, we have a lot of fun with what we do and, most importantly, we put ourselves on the same level of those who listen to us. We believe that this gets to the people, who appreciate and have fun with us! Every Chrome Steel gig is, before anything else, a party with people who love Judas Priest masterpieces!

Keep supporting the heavy metal scene around the world and give our own country bands a chance! If you want to follow us we are on YouTube and Facebook, and if you like what we do please spread the word! Keep the faith!