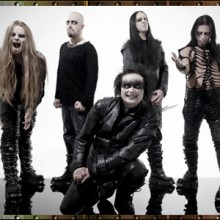 This month, Steel Mill is proud to present an interview with Paul Allender, guitarist of renowned british metallers Cradle Of Filth. Our guest reporter John threw a bunch of questions to the guitarist and got an set of interesting answers back in exchange. So keep on reading and dive right into the Filth!

Paul, first off thank you for taking the time to talk with us.  Can you talk a little about what got you into music growing up in the U.K. in the 70’s and early 80’s?

No worries. I first got into music at a very early age because my dad was a huge ‘50s and ‘60s rock and roll fan. Every Sunday he used to play all his 10″ vinyls all day, it was great. Twelve years old was the turning point for me and that’s when I discovered metal. I guess it was a natural progression from being bombarded with rock and roll! Haha.

Can you discuss specifically the influence of Judas Priest at that period of time?

The influence of Priest was amazing for me, well actually it was them and Iron maiden that got me into metal. It’s all about the guitar harmonies for me. I felt like Priest were the darker side of the similar music style that was Maiden.

What got you interested in playing music and guitar in particular?

Well that’s an easy one, it was Adrian Smith, Dave Murray, Glenn Tipton and K.K. Downing.

Were you in many bands prior to Cradle of Filth?

No, Cradle was my first band.

At it’s inception, did Cradle of Filth have any predominant influences or a particular vision for the type of music that would follow?

To start off with we were doing more of a hardcore / punk type thing which was pretty cool. But after a while we realized that wasn’t what we wanted to do, I mean we were all metal heads and totally into the whole thrash scene at the time. We started jamming more of the stuff we wanted to do and realized that we had our own sound and it was the way forward.

Can you talk about the projects that you were involved in during your hiatus from Cradle Of Filth?

Sure, when leaving Cradle in ‘96 I was in a band called The Blood Divine with the Ryan Brothers and Darren White from Anathema. We were like a stoner rock band and to be honest, it was a ton of fun to play. We released two albums and did various tours. After that I started a band called Primary Slave. It was like a mixture of thrash type music with techno samples. I really enjoyed that band, it was totally different for the time and completely refreshing. I also learnt graphic art in this time period. I managed to get a hold of Photoshop and started messing around with it. Now quite a few years later I sell prints of my art and have my own art company called Vomitorium. I rejoined Cradle in December 1999.

What changed in the situation with Cradle Of Filth that caused you to rejoin the band?

Not much really to be honest. I guess the main thing for me was that people had grown up and had started treating it like a job and not a hobby.

Have you been at all surprised with the amount of success worldwide that Cradle Of Filth has enjoyed over the last 19 years?

Oh totally, it’s been amazing so far. I would have never imagined that it would get this big. In the end of the day I still see us as a band with 6 people just jamming and writing music we like, nothing more.

Can you talk about the writing process for the new record, Darkly, Darkly, Venus Aversa ?

When we start writing for an album riff ideas get emailed to me and I arrange the song with the ideas I have been given to see if anything works. Most of the time I will start off with a riff that I have been jamming on and then once I’m comfortable with the idea I will make a song from it by writing more ideas and riffs to enhance the feeling of the original riff. This keeps going back and fourth until we have around 3/4 of the album written. Once it has got to this stage it will then have lyrics added to the tracks. This is just a rough breakdown to how we do things, it’s far more involved than this but I don’t want to write pages of how we do things and bore you shitless! Haha.

Over your career you guys have shared the stage with many great bands.  Has there been one or two in particular that have been especially special for you?

Yes, when we played with Judas Priest, both with Ripper and Rob. We’re also playing with Priest again on these up and coming festivals in Europe… can’t wait for that, it’s going to be amazing.

Paul Reed Smith has been making your signature series guitars for a while now. Can you tell us the story of how that relationship came about?

Well, it all started off when I designed a guitar with bats on the neck instead of birds. I took it into Photoshop and changed the image and redesigned the guitar. I sent it off to PRS to see what they would think and if they liked it. A couple of months went by and i got an email saying that they were going to make it! I was very surprised indeed. They first made the guitar as a Private stock for me and then made it as an SE. Now there are three SE’s available, Blood Red, Emerald Green and Purple & Black Sunburst.

Aside from your picking hand, are there any other secrets to your guitar sound?

Haha yes…. me! No seriously though, it’s down to the way I play. No guitar player sounds the same even if you gave them the same equipment.

Looking at Judas Priest’s discography, is there one particular album that had an impact on your?

My favorite album of all time is “Defenders of the Faith.” Every song on that album makes the hairs stand up on the back of my neck and sends shivers up my spine. It’s just amazing on so many levels.

Again we want to thank you for taking the time to talk with us today and we wish you much success on your US Tour.

Cradle Of Filth on the web:
http://theorderofthedragon.com/