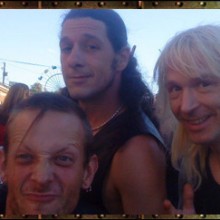 Another top Judas Priest tribute band, Disturbing The Priest from USA, got ran through the Steel Mill grinder as Kimmo Tattari interviewed band’s “K. K. Clone” – Bill The Reptile. Read on to learn more about this formidable Priest tribute!

Welcome to the Steel Mill, Bill! Could you start by introducing your band ‘Disturbing The Priest’?

Sure, however the band just relocated and some members are in transition. Our “Glenn” is an incredibly talented guitarist with blazing hot licks, his name is Scott Farmer, and our other “Glenn” in Ohio is Bill Erskine, an equally talented player. The bassist is Christian Fisher, an energetic player with a flair for the dramatic. Our vocalist in Ohio, and probably here, is James Rodgers, from Kenmore Ohio. He’s from Tim Owen’s ‘hood, went to the same school, and knew the same people as Tim in the years before he was “The Ripper”. The drummer has been Jacob Painter, from Canton Ohio. A drummer with keen ability to master the licks that make Priest come alive on stage. And me, Bill the Reptile, I personify K.K. – like Tim said, “clone”.

I understood all of you have also had some other bands or projects before starting Disturbing The Priest?

Sure, we were all musicians before this, notably Scott Farmer, who played for Blizzard of OZZY, Chris and I played for Gods of Thunder, James has performed with several acts including MO RAGE from Cleveland Ohio.

Speaking about your name, is it also a homage to another great British band, Black Sabbath?

Yes, originally slated to do 2 sets, one as Priest, one as Sabbath.

Tell us something about the history of DTP, whose idea was it to form a Judas Priest tribute band?

It’s all me… no wait, Chris and I started this, K.K. and Ian style…

You’ve been working as a soundman, and are also a factory trained Fender tech?

Yes, I was a Union soundman, and I was also the service manager for a small chain of music stores in Ohio, and I have been certified as an electronic tech as well as acoustic and electric guitars.

You’ve worked for Tim ‘Ripper’ Owens in his Tap House. Tell us something about it? It must be a place worth visiting for any Judas Priest fan passing by…

Tim was great to me when I was there. A must see for any Priest fan… The VIP area has guitars that were K.K.’s and Glenn’s, as well as Tim’s leather jacket from the stage… lots more to see. Wendy and Ronnie Dio have a lot to do with Tim’s career after Priest, in fact Wendy Dio is his manager, so when you go you can also see the platinum “Holy Diver” on the wall.

Have there ever been any plans to ask Tim to join DTP on stage?

How many gigs have you played so far? And what is the most memorable one, what made it so great?

At least 14 in Ohio. Playing the Ripper Owens Tap House (was the best) for sure, the first Judas Priest tribute to play there. It was the most packed I had seen it since Tim’s acoustic show with Scott Jones.

How much practice does it take to make a successful tribute act?

Constant and forever, at least 2 hours daily, and rehearsal as a band for 3 hours, or four at a whack, several times weekly…

What sets Disturbing The Priest apart from other Priest tribute acts?

Well, number one, we are a tribute, not a cover band. A Judas Priest tribute should sound and look the part, we do both, and we play what the audience wants to hear. It can be very difficult to pull off a catalog like theirs.

How many Priest songs do you currently have in your setlist?

23 in current rotation, but like I said before, we are always working on the “other” tunes too. At any time, we could pull off a fair amount!

Which one took most work to get done, and which is the hardest one to play live?

It’s between “Rock Hard, Ride Free”, and “ The Sentinel”.

What is your favourite Priest album and track?

Are there any ‘Spinal Tap style’ DTP roadstories to tell?

Yes, but we won’t do that, it would spoil the majik…

What’s up next for Disturbing The Priest?

Looking for a manager who can book national, and isn’t full of sh*t…

Long live Priest, and all Priest fans! And God bless K.K. Downing for making this army vet feel like living after midnite!

For more info on Disturbing The Priest, check out these sites: