When one thinks about the absolute classic bands of NWOBHM, Saxon is right there on top. Vocalist Biff Byford (along with guitarist Paul Quinn) has steered the ship since band’s formation in late 1970’s and they are still going strong. The frontman and his cohorts have just issued their 19th studio album “Call To Arms,” which reaches back to the classic days of heavy metal while still retaining the harder edge Saxon have attained in their latest decade together. At the Sauna Open Air heat, Biff sat down with Steel Mill to talk about the current record, days of the first Monster Of Rock festival in 1980, 70 000 tons of metal- cruise and steam trains.

So tonight you will step on stage on Sauna Open Air, with the heat surrounding us it certainly lives up to its name. What can we expect from the gig?

Well, it’s not a long show. It’s shorter than Sweden Rock yesterday, when we played a longer gig. But it’s a good mixture of songs from the new album and old tracks.

How about the new album “Call To Arms” – how has the reception been so far?

It’s getting great reviews around the world. And it got its first chart position yesterday, no. 19 in Sweden. So it’s cool. And we like the album, I think it’s bit of a radical change from the last one. It’s more in the spirit of our old stuff, not quite the same but in that vein. There’s intensity to it and it’s in your face, you know. And there’s less digital jiggery on it. Less keyboards on it too, and the keyboards we have used are towards older type of sounds.

Yeah, it could have been called “Deliver Me” tough. But yes, it’s about the New Wave Of British Heavy Metal coming through to now, the phenomenon, the fans being together. It’s like “Denim & Leather” revisited really.

One famous festival gig you played was the first ever Monsters Of Rock in Donington 1980, how do playing a concert like tonight differ from that time?

Well, obviously we are giving away the remix of our Donington gig to listen to in relation to the new album. But you can’t really compare the eighties with now. I think it’s now closer to the eighties than in a long, long time. There are a lot of new bands getting into the music, and a lot of older fans coming back into it. And there are a lot of older bands that never went away so I think it’s a great time now. Not just for us, but for Iron Maiden, Judas Priest, Motörhead, Whitesnake…they are all coming back to that British style of music. And this new album of ours does again sound more British.

Why was the 1980 Donington gig not released until now?

We just found it last year. The one that’s out there already is a bootleg so now it’s an official release. That’s why bootleg has one more song on it, because it is a cassette. On the real version, tape runs out so it doesn’t have the extra song.

Saxon has enjoyed a kind of renaissance since “Dogs Of War” (1995) and “Unleash The Beast (1997) albums, where did the renewed energy come from?

Yes, it’s been kind of a steady climb. I think it’s the chemistry of the band, which is great, and we have a great catalogue of songs. And we like to play the new songs like the old songs, full on. We’re a full on-band and that’s what we like to be, whether we are playing a ballad or “Heavy Metal Thunder.”

The band always had interesting lyrics and a lot of them deal with historical events. You being the sole writer of those words, where do you draw the inspiration and ideas?

They are nearly always great events and great figures. I don’t really write about mundane things like farming or bridge building. They are always historical figures that interest me. Like “Attila The Hun” or “Crusader.” Even “Dallas 1 PM” is really a historical song. And “Mists Of Avalon” from the new album is one too. We went to Mexico recently and there might be a song about those experiences on the next album.

Some of those historical lyrics are relatively easy to pinpoint to a certain era or event but how about a classic like “Princess Of The Night”?

It’s actually about a steam train. I used to sit and watch trains go by when I was young. So I went to a steam train stop and that’s what the song’s about. They used to call those trains by different names and one of them was called “Princess Elizabeth.” And “Princess Of The Night” just came to me, it had a million different connotations.

A while ago you played at “70 000 of Metal” cruise in the Caribbean Sea, what kind of experience was that?

It was great actually, we enjoyed it. It was interesting. 24 hours of food and beer, can you imagine what it was like? 2 or 3 o’clock in the morning..there were few Americans there but it was mostly an European audience. You couldn’t get away from anyone obviously but I thought the concept was great. They were all really well behaved, nobody fell off the board.

During those shows you played the albums “Wheels Of Steel” and “Strong Arm Of The Law” back to back. How was it like and did it take a long time to learn all the songs?

Well, there aren’t many fillers on those albums, you know. And yesterday we played the whole of “Denim & Leather.” There’s only few tracks there we don’t usually play so it wasn’t that difficult.

How does playing the whole albums live differ from an ordinary gig, is there a special vibe to it?

It’s quite stressful for the band because they have to remember the bloody songs and deliver them like the other stuff. But yeah, it went pretty well. Everybody knew we were playing it obviously, so the anticipation was great.

Do you usually change the songs around live or are they done just like the studio versions?

No generally we don’t change them much. The thing is, when we have a big production with the eagle and everything, you cannot change the songs around too much. It messes up all the cues, lights and everything. We like to do that more on small clubs but not on these bigger festivals.

A documentary film on the band called “Heavy Metal Thunder” has just been released? What can you tell us about that project?

Yeah, it just sold out actually so the new batch is going to be out soon. The idea for the film didn’t come from us; we had nothing to do with it. It was done for BBC so it’s not really our DVD. It’s a documentary on Saxon done by a production company. I think it’s great and really interesting. There’s couple of older guys from the band that we kicked out or left. They are giving their input, ranted and raved a bit so they had to chop it up slightly. But it’s pretty good; I think the story needs to be told. The Saxon history – nobody really knows the real history because we weren’t filmed or interviewed back in those days. 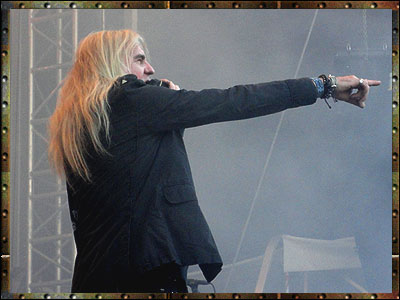 So are there any official new DVD’s coming up in the near future?

We got one coming up next year called “Heavy Metal Thunder Live” and “Eagles Over Wacken.” That one will be five Wacken shows. So it will be a massive DVD set. And the man who recorded the Sweden Rock just yesterday also recorded five shows on this tour, so we’ll see how that goes.

Thanks a lot, Biff!