A Journey through the Ages: Gary Hughes (Ten) Interview

Your new album “Gothica” has now been released, congratulations! Can you describe the content, what is “Gothica” and where do the stories take the listener?

Thank you! Yes, I think that “Gothica” is one of our darkest albums to date, especially on the lyrical department. The music is indeed a bit more sinister too, but at the same time we retain all the commercial traits and elements usually associated with a Ten album. We just hope that the album lived up to our fans’ whims and wishes, since it’s their feedback I had taken into consideration in the first place. This different take on things is the proof that we are gradually rediscovering the essence of Ten, which we built with records like ‘The Name Of The Rose’ and ‘Spellbound’ and allowed us to establish ourselves on the scene.

I would describe the album as a rollercoaster of emotions and as listeners, we are transported from the darker side of human nature to the nocturnal supernatural, the dramatic realm of nightmares and the forbidden. A journey through the ages – mythical or otherwise. Timeless stories, that are as infectious today as they were a hundred years ago like ‘Dracula’, ‘Dr Jekyll and Mr Hyde’, ‘The Time Machine’ alongside modern classics such as ‘A Song Of Fire And Ice’, have been my main sources of inspiration for this album.

The first single lifted from the album was called “Paragon” and more recently, we have had videos for “La Luna Dra-Cu-La” and “Travellers”. Do you get to pick the singles yourselves or does the record company have a saying in this?

Yes! All the singles we released were decided in close cooperation with the guys from our label. The only exception is “Paragon”, which was the first release from “Gothica” and served as an early teaser really, in the form of an official audio track. Much like with what we did with “Battlefield”, when the “Battlefield” compilation was released a couple of years ago.

It seems Ten is enjoying a new burst of creativity since 2011 with five good quality albums released since then, nowadays bands seem to have longer and longer intervals between studio releases, where does this faster pace with Ten originate from?

I think it stems from the fact that I’m an obsessive songwriter! I think we all worked really hard to be able to build this kind of consistency, especially since our hiatus from 2006 until the release of “Stormwarning” was a very difficult time for everyone involved with the band. Our friends around the world played a big part on that too, for without them there would be no reason to return at all.

In a way, the current situation very much reminds me of our early years, when we released six albums in five years. The only difference is that back then a band could make an album and almost guarantee to go out and tour on the back of the new release with full support from the record label. Having said that, the feeling and the hunger is still there and there are no immediate plans to stop any time soon!

Aside from Ten, you have recorded several solo albums including the ambitious King Arthur concept releases. Any more solo album plans and since you write all Ten material as well, what in your opinion separates Gary Hughes solo record from Ten release?

As I mentioned previously, I write constantly but not everything I write would fit on a Ten album, since the sound we are going after is very particular. We are always going for the epic and emotional when it comes to Ten, while my solo albums have always been more mellow and heartwarming if you like. That is what separates a solo album from a Ten album. I have to say that I am proud of the flavors and signature essences that make up Ten’s sound and they have served us well making Ten different over the years. We know that our following likes our style and sound so we consider that too. Having said that, all my solo albums have allowed me to indulge in song styles and textures that I wouldn’t necessarily associate with Ten.

In regards to another solo concept album in the vein of “Once And Future King”, what I can tell you is that I’m working on a sort of new rock opera, different in its overall theme but similar in spirit, but it will take longer to get released. I would like to do something that could be presented live though, maybe in the theater, with relatively low costs. Not necessarily, a mega production like Avantasia, so to speak.

Ten has had its fair share of personnel changes over the years, how is current line-up gelling together?

Indeed we have, but it is a natural process for any band that’s been going on for so long. I think this lineup is perhaps our strongest to date and they are all top blokes. They read each other perfectly and on stage they lock in tight. They are the reason that much of Ten’s music moves the way it does. They are brothers to me. They are also a pleasure to record as we usually have a good laugh, which relaxes everyone for what could otherwise be pressured moments.

Are you still in contact with former guitar player Vinny Burns and any chance you two might work together again in the future?

I actually had the opportunity to reunite with Vinny about four years ago during our FireFest performance and we spent some quality time together. It was great seeing him again after all these years and to be honest it was quite hard to believe that so much time has passed since the last time we have spoken. I’m sure that we’ll get to work together again in the not too distant future, but I can’t foretell in which form and for what project. It would be a pleasure though!

In late 1990’s you also worked with Magnum singer Bob Catley on his first three solo albums, especially the first one “The Tower” is an underrated masterpiece. How do you remember working with Bob and reflect on those releases?

I really enjoyed the albums I did with Bob but the interesting thing was that before I did them I wasn’t that familiar with Magnum’s material. I had to listen to their back catalogue to get a feel for what Bob was all about. Back when we started working on the first album I remember that Magnum were on a hiatus so Bob was free to record solo material. This led not to one, but three albums, for which I’m very proud of! I’d love to work with him again, I’m just not sure whether Magnum would allow it! Plus the compensation would have to be right.

How important is it to you to keep British heritage close to your songs and stories?

Very! We are proud to be British and it is inevitable that some classic British hard rock elements will creep in every once in a while in our music! 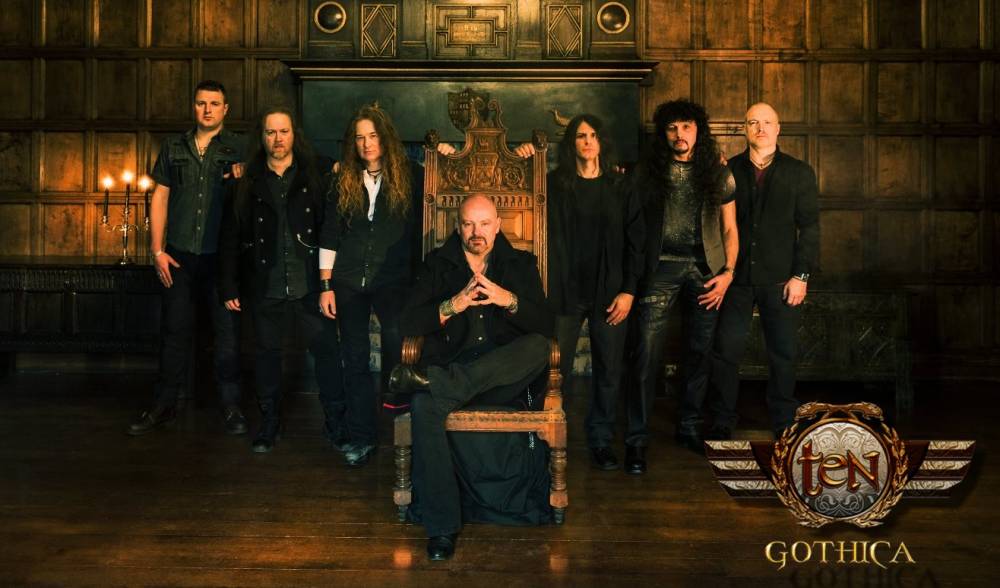 Who were artists and singers that influenced you both as a songwriter and as vocalist?

Many! I’d say that our influences vary, from the late Deep Purple years (“Come Taste The Band” must be my favourite Deep Purple album), to Whitesnake, Michael Schenker and of course the 80s NWOBHM and Hard Rock scene in general. I’m proud to say that we’ve managed to combine all these different influences (no matter how heavy or soft these may appear to be) and created something of our own, which, as it stands, has managed to stand the test of time quite successfully, despite the difficulties that the ups and downs of the scene have produced.

Any thoughts and recollections from the classic NWOBHM era, what was the early 1980’s in the UK that made the movement so special, both of its time and ripples still felt to this day?

I think it was a very different time back then. Everything seemed more innocent if you like. The music had passion and feeling and this honesty is what pays off still after all these years! It is no mere coincidence that even younger bands do tend to look back to these big bands of the late 70s, or early 80s for inspiration. This music is timeless and hugely influential and I’m sure it will be for many more years to come!

Last greetings for the readers of KK Downing’s Steel Mill?

Many thanks for giving me the opportunity to answer your very interesting questions! I would like to wholeheartedly thank both you personally and everyone reading this for their long time support! We hope to see you all out there on the road very soon!

“Gothica” is out now. To find out more on Ten visit bands official web site and Facebook. 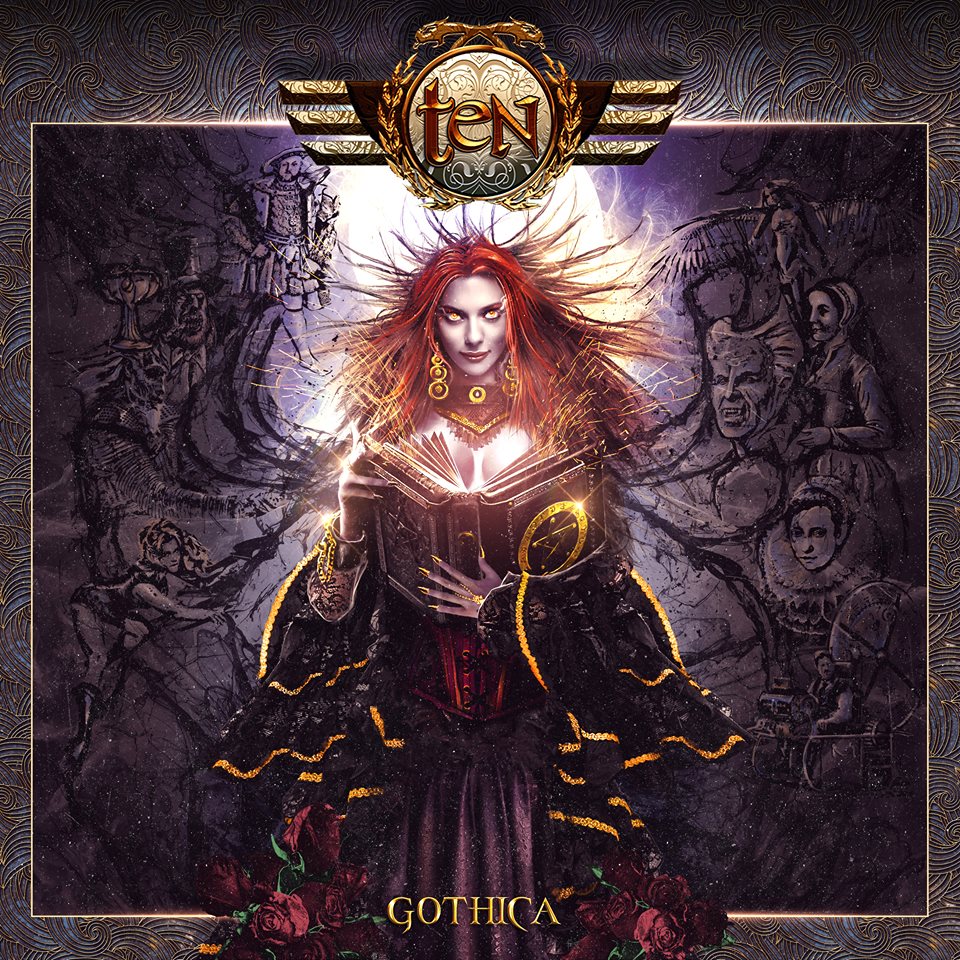