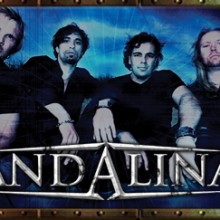 Could you start by telling us some background info about yourself and the band Sandalinas?

Music has always surrounded me and my family. My mum was a music teacher and my dad played piano. I picked up my guitar at quite a young age. I was enrolled at the Barcelona Conservatory of Music where I studied piano but I swapped instruments when I listened to Adrian Smith way of playing. I’ve been really into Metal since I was a kid.

Sandalinas started as a project back in 2003. I had written some songs and I sent them to Andy LaRocque, guitarist for King Diamond, he liked the stuff and I gathered some studio musicians to record the debut album LIVING ON THE EDGE, featuring current FIREWIND singer, Apollo Papathanasio. Then gigs with The Scorpions, Y&T ad Yngwie came and the rest is just history until now.

First of all, congratz for “Fly To The Sun”. This is your second album, how is this different to the first one “Living on the Edge”?

Hi my brother of steel and thanks so much for your kind words. Well this album is the logical evolution and it’s the second step after the release of Living on the Edge. I think both albums are great but I’m more satisfied with the compositions of FLY TO THE SUN than of LIVING ON THE EDGE.

You have lot of special guests on “Fly to the Sun”, how did you manage to get them all to collaborate and how was it to work with them?

It’s a long story….. Back in 2005 SANDALINAS opened for Yngwie
Malmsteen in Madrid, Spain. There I met Patrick Johansson, we just exchanged emails and I reached him and told him about the album and he said he was in, so I flew to West Palm Beach on December 2006 where we recorded the drums for the album. On February 2007 I went to Gothenburg to record the rhythm guitars and Rick Altzi did his vocal parts. Then I wanted Hal Patino to do the bass parts but finally it was Mick Cervino, from Blackmore’s Night, Yngwie and Violent Storm, who did the bass parts. Andy sent him the tracks to his studio in Boca Raton, Florida, and he did an amazing job. It was great. Also Derek Sherinian recorded “Seasons in the Sand.” He put some great keyboard parts here and there.

Last but not least, I met Chris Caffery through his official MySpace
site. I just told him about the recording and he said he was in 100% so he flew from NY to Gothenburg and did an amazing job as well. He recorded two guest solos on “Double Cross” and “Shadows in the Rain.” Andy LaRocque also did a solo part on “The Healer Talks,” that solo was state-of-the-art. Andy recorded, produced, mixed and mastered the whole album, and he did an amazing job.

How about your touring plans, anything special lined up and will you be playing lots of new songs?

Well, actually there’s nothing up yet, but we’re working hard to tie up some gigs. We’ll see and I hope to give you some good news shortly.

There’s a different live line-up, have you been playing before with each other? Do you rehearse a lot together?

Yes, the line-up is different except from Rick and me, Mats and Alvaro did not play on the album. We just know each other from the Swedish metal scene. Alvaro Svanerö is an excellent drummer, he is drumming for Loch Vostok and he recorded his drum parts on my acoustic album which I expect to release pretty soon. Also Mats is an excellent bass player. He currently also plays in a Swedish band called Dreamland, these guys rock, I tell you. We rehearse every now and them. Since everyone of us lives in different places it’s difficult to meet every weekend and rehearse like when we were in school. We just meet ten to fifteen days before the gig and go through the set list, it’s more
than enough.

Who (bands/musicians) are your main influences?

Where does your inspiration come from when writing songs?

Actually I write songs with my heart. It’s all natural. I get my
inspiration depending on my mood, on the way I wake up today. I just grab my acoustic guitar, plug it in and go for it. Sometimes it takes me ten minutes to write a song and sometimes I need one whole year to finish one, so it really depends. On the other hand, I don’t see myself as a guy that takes ideas from this or that artist, of course I have my own influences. Anyway I just go with the flow.

You have studied guitar playing extensively in both Europe and US. Some successful guitarists throughout history are self-taught and cannot even read notes. What do you think are the advantages of taking guitar lessons instead of trying to learn everything yourself?

Well, actually I took music reading lessons and piano lessons. I’m
half self-taught because it was after seven years, in 1992, when I went to the US to take some lessons in New Milford Connecticut. I think it helps as a matter of having all the musical ideas in the right place, but music is a gift, either you have it or you don’t. You can’t just learn it if you don’t feel the music inside of you. So I totally respect these musicians who have learned how to play guitar themselves because they are very talented and they have a unique gift and I’m sure they play what they feel, so I say “bravo” to it.

What kind of guitars and amps do you currently use both on stage and on tour?

I’m using a Marshall, a JCM 900, and a Line 6 from POD, the live
model, I think it’s a cool effect board because you can just plug it
directly into the mixing table, and I just use the amp to follow up
the song while we’re onstage. I also prefer to use a POD for the
recording studio; it brings all the effects, so I think it’s a cool
device. 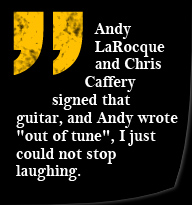 As far as guitars are concerned, I use Jackson, concretely I recorded this album with my SLSMG soloist, a black one, which is the one that features on SANDALINAS official site. I also love the Eerie model, I hope I get it one of these days. I also use Ovation and Cort, both are acoustic guitar trademarks, 6 and 12 string models. I recorded FLY TO THE SUN with a celebrity. I also own a double neck acoustic guitar, ala Richie Sambora, it’s a cool model. Therefore, I remember using an Ibanez, the Paul Gilbert model. It was awesome because Andy LaRocque and Chris Caffery signed that guitar, and Andy wrote “out of tune”, I just could not stop laughing.

What kind of metal scene there is nowadays in Spain? Some good bands like Oratory have started to gain worldwide success from both Spain and Portugal?

Actually, I don’t know exactly because I don’t have that much of
relation with Spain music wise. I’ve been more in Sweden than in Spain since SANDALINAS has recorded both albums with Andy LaRocque in his studio close to Gothenburg. I can tell you that young musicians are pushing very hard and they love what they do so I hope some of them will become great musicians and they will be involved with great projects or bands. I wish them the best. I’ve never heard of Oratory though.

There are lots of melodic metal bands out there competing to get recognised, what do you think is Sandalinas’ greatest asset?

Well, a good thing about SANDALINAS is the way songs are written. It’s about honesty. I’m an honest musician. I’ve always written the best material I’ve been able to and my heart and soul are in every single song. I truly love the new album because it’s straight; it’s melodic and goes straight into the chorus. Therefore, every single solo has been perfectly calculated and there’re some cool guitars recorded in the album. I’ve used many different type of guitars, such as 12 string acoustic guitars, electric and many effects that have helped the songs to grow very solid.

Do you feel you need to change your sound for each and every album to get different audience?

It depends. Actually I think that the whole idea rests on the song. If the songs are good enough, you will reach a listener from different places because we’re all human and everybody likes melodic songs as long as they are not cheesy or cheap. As far as sound or equipment is concerned, I prefer to stick to the same style of effects I’m using. I do not see myself using a type of industrial metal effect but another type of distortion indeed.

What does the future hold for Sandalinas? What are your personal goals as a musician?

As far as SANDALINAS is concerned, we’re entering the studio on August 2008 to record the third album which I hope it will be as good as FLY TO THE SUN. About my personal goals, I just want to learn as much as possible from every single musician surrounding me and I would like to keep on writing the best songs I’m capable of.

Any final words to our readers of Steel Mill?

It’s a pleasure to be interviewed for K.K.’s site – so thanks so much to you all and I’m looking forward to grab the new Priest album, I’m sure it will be rocking.

Thank you and keep on rocking Jordi!

Check out promovideo for “Never Seen Before”!

November 13, 2019
7ads6x98y
We use cookies to ensure that we give you the best experience on our website. If you continue to use this site we will assume that you are happy with it.Ok