Skull Fist, hailing from Canada, is a metal band known especially for their full speed high energy live performances. Steel Mill had the pleasure to have a chat with the frontman Zach Slaughter. Zach is the man behind the vocals & the guitar as well as a fearless skater with a near-death experience. Even some promo footage for their new album was made from hospital. 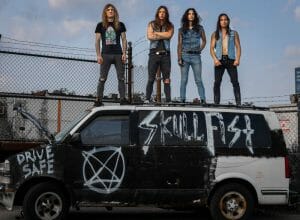 Hello Zach, how are you today?

Half was written a few years ago while I lived underneath the stairs of a friend during vocal surgeries so that might explain why people keep complaining about it being a fairly “mellow” record.

So that’s the reason why “Way Of The Road” is quite relaxed compared to the previous ones?

Yeah, exactly. Lots of stuff happened during that time. I was in a reflective phase or something. I had a lot of complaints about it, but for me it was exactly what I wanted to do, so I’m satisfied.

Is there a certain formula how Skull Fist builds songs? Where do you usually pick ideas for your lyrics?

What ever is happening at the time is what I write about. I hate writing songs about things I’m not actually connected to. I don’t think there is a formula or anything like that, though. Just winging it with music like I do with everything. 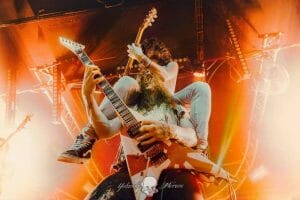 Skull Fist has three albums under the belt now. How do you see the band´s progress so far?

I don’t know, I’m not really thinking about things like that. I just like making music so whatever or wherever that brings me is fine. When I was younger I wanted some big fame or whatever, but I think that desire ended once I starting touring. As long as I’m happy with the songs that come out. I’m not a huge fan of touring, I’d rather just write and record but I guess I still have to do some tours and crap during the meantime.

Anyway, you have been on the road recently, promoting the new album. They were the first live performances after your vocal surgery, am I right? How was the tour?

Yeah, I didn’t sing for approx 2-3 years. It was nice being able to sing again, I still have a lot of work to do, though. It was hard to get the 3rd album finished and the vocals took me over a month to finally get through. Still working on it, I think the 4th album will be easier though, the voice is always getting stronger assuming I can stay away from shit like smoking and drinking.

Live performances of Skull Fist are quite unique. Is it easy to come up to the stage with that energy night after night? Any remarkable moments you’d like to share with us?

Not really, I think sometimes I have less energy than other gigs. It all depends on how I’m feeling that night. I definitely don’t like getting up there and running around like I’m having a great time if I’m not. Sometimes they are more laid-back and I’m just singing and thinking about it. Occasionally there’s some excitement in there, though. I think it’s all just depending on how I feel or whatever, though.

Deathgasm, the movie: Some people actually found you guys when watching it. How did you end up to be in a horror comedy movie soundtrack?

Yeah, it was nice to be apart of it, actually. The movie was fun, it reminded me sometimes of a more comedic Trick or Treat. That movie was really strong for me as a kid so this one was a nice change of pace in the same vein. They just e-mailed us randomly asking to contribute to the soundtrack though, very nice guy, the director, and everyone involved was really chill. Would be nice to work with people who have such a nice demeanour more often. 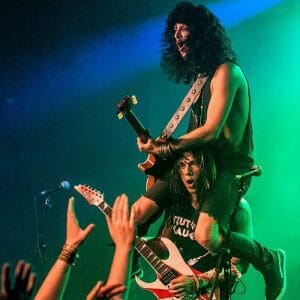 Tell us about your skateboarding history. I’ve seen you do some extreme action.

I used to skate very seriously in my teens. I rode for a few smaller skate companies when I was 17, but it started becoming socially annoying, so I quit them and got into music instead. Felt like a better way of expressing myself or whatever. Still skate very often, though, I still count every stair set and scope out of every potential skate spot I see. Can’t get it out of my brain, haha. I love skating though, it turns your brain off from everything. You aren’t allowed to think about things when skateboarding, if you do you end up hurting yourself really good, so I like that. Almost like a shred version of buddhism or something, haha.

I suppose I like a lot of extreme stuff, I tried sky diving a while ago, and I think I’ll get into base jumping when I have more time. The biggest issue for me is time, always trying to fit as much as I can into a day as possible. I think after music I’ll probably get back into more stuff like this assuming my body and mind can stay nice and healthy.

Probably a few more tours this year. We will hit all the obvious markets, maybe Asia again, as well. I have the 4th album written and ready to go, so we might just record a new record in December and release it in early 2020. Not positive though, I will see how I’m feeling when that time comes around.

Thanks for your time and all the best! Hope to see Skull Fist live again soon!