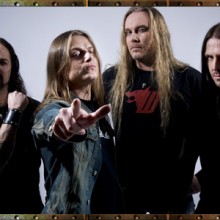 With all paws firmly rooted in the classic heavy metal, swedish Wolf has been creating their music since mid-nineties and show no signs of slowing down. With their new album ‘Legions Of Bastards’ released in April and a good slab of touring coming up in the summer, Wolf is ready to howl to the metal masses once again. Steel Mill’s Pete Alander spoke with band guitarist Johannes Axeman:

What is the story behind the band’s name?

Well we wanted a name that was short, exciting and really cool. First we wanted to be called “Wolverine”, but nobody liked it. “Wolf” is short and really kick-in-the-face like name.

If you would need to consider another animal than wolf, what would it be?

Hah, something pretty similar. I think “Shark” would sound pretty nice also! It needs to be some kind of predator ´cause it states the band best.

Since the early days, you have been a band who hails to 80´s metal. Judas Priest and Iron Maiden are quite obvious inspirations?

Absolutely. We are really into the old school metal and you can hear it through our music. We love heavy metal and want to share that feeling with our fans around the world.

There have been quite a lot of line-up changes during the years.

Yeah, there have been lot of changes in the line-up but it really hasn´t changed the music at all. We still sound like Wolf and every album stands still. Some of our previous players have chosen day work and family instead of the band and it is always acceptable. You gotta make choices in life, that suits you the best. Being in Wolf means you have to be in it with 166% . We have nothing more than respect to our previous musicians and luckily this train is still going fast and furious! We have our hearts in this.

Who are or who have been some of your most favorite guitar players, influentially?

There are a lot of good guitarists out there which I respect. Of course Judas Priest and Iron Maiden are the main influences for me but I really like Zakk Wylde, Ace Frehley, Jeff Waters… Chris Holmes got some really good solos. Yngwie Malmsteen is great! I don´t listen to guitar-only music though even I play it myself. It needs to have more.

Are you a self taught guitarist?

Yes I am. Totally.

What is the state of heavy metal in Sweden nowadays?

I think it´s great. There are a lot of different bands playing and evolving. There are also good venues to play no matter what size the band is. Even the smaller bands can find a place where to play or practise. Heavy metal is not as big as it is in Finland but we have lot of metal people here. Sweden Rock is a good example how huge it is. Only downside probably is the media coverage. It is quite hard to get positive reactions from Swedish media.

‘Legions of Bastards’ has got a lot of aggression in it yet you have still saved those brilliant guitar melodies. How is your latest album different than previous ones?

It is very natural album, and very Wolf-like album. We kind of took a step backward and created something we all wanted. I believe LoB is very “hot” album. It has all the metal vibe you need. We just did it, we didin´t expect too much from it and therefore we love it. It all came naturally.

Do you got a special formula how to write songs?

No, all comes naturally. When you have metal in your blood, it just flows from you. We usually make lot of songs and all the best ones will make to the album.

You will be on tour with Accept. What are your expectations?

Well, it is great to be on tour with them. You get to see Accept! What is not to like? Plus we all like performing live. The energy you get from the fans is absolutely brilliant.

What are the main challenges Wolf is facing in the future? Where are you in 10 years or so?

I hope we are recording an album. We all have our hearts in this and we would probably die without this. It is very simple: Heavy Metal is the best!

What advices you would give to future “wolfers” who are just starting a band?

Just believe in yourself. Don´t take shit from anyone! Always be better than the rest.

Got any message to K.K. Downing?

K.K. is my inspiration and it is an honour to be interviewed to his website. Horns to K.K.!

Wolf on the web:
www.wolf.nu