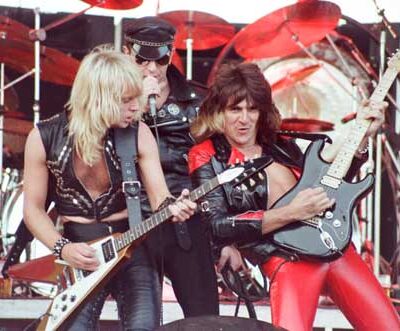 In the history books of rock 1980 is a pivotal year, it was the crowning year for New Wave Of British Heavy Metal. Many classic records were unleashed during that period of time. It was also the birth of Monsters Of Rock, the biggest heavy metal festival in the world. 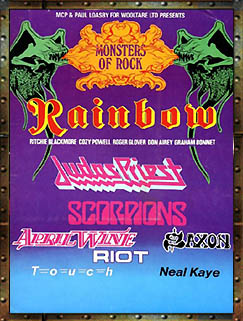 By then there were no annual events of such kind, of course festivals had been organized since the days of Woodstock and during the 1970’s there were few huge outdoor shows in the Isle Of Wight, Day On The Green in Oakland and California Jam. But those were one-offs, with less thought going into marketing, agenda and general commodity of the people. And most important of all, they were never strictly metal with always few acts from other genres to draw in maximum amount of people. In that sense, Donington was something completely unheard at the time. A huge risk.

So as the new decade dawned, Monsters Of Rock was originally created in the back of promoter Paul Loadsby’s mind. The man had promoted the recent UK tour by Rainbow so they were a natural group to be asked to headline the event. Luckily Ritchie Blackmore & co. agreed and Rainbow’s example soon brought other bands into the bill as well. 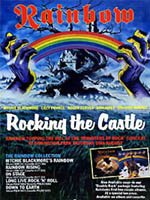 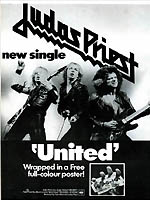 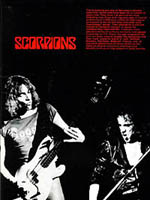 The venue chosen for the event was the Castle Donington motor racing circuit in Leicestershire. Capable of holding up to 100,000 fans, it was near to the industrial Midlands and had an easy access to major transport links. Early preparations were delayed after objections from locals and police but the original timetable was held on to and event scheduled for Saturday, 16th of August 1980.

The rest of the bill meantime was assembled as a balanced mix of British and international hard rock. Judas Priest, who had just released their masterpiece “British Steel” were the frontrunners of the new age of heavy metal although they had been around for several years already. Scorpions were hailing from Germany, back then still a new territory as far as metal bands were concerned. Their latest album “Animal Magnetism” again had caused controversy with its cover rather than the brilliant music it contained. 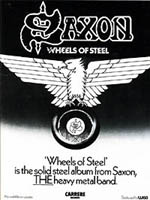 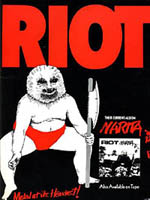 Another NWOBHM act Saxon were a new ambitious group with also an excellent record “Wheels Of Steel” behind them. April Wine acted as pioneers from Canada, their career had begun in 1969. This left Riot and Touch, both travelling overseas from the US. All in all it was a mighty impressive bill.

For the festival a quadraphonic sound system was installed to ensure maximum volume and sonic boost. The original idea for fireworks to be launched from the trees all over the area had to go as the shock wave literally knocked people down during the testing.

Parallel to a Judas Priest sound-check days before the event a test of Rainbow drummer Cozy Powell’s pyrotechnics resulted in an explosion heard some three miles away blowing out all the P.A and causing £18,000 worth of damage to the stage set-up. The officers calmly asked effects to be toned down.

Ticket prices were £7.50 in advance. Though torrential rain over the preceding week had turned the site into a mud field, the day itself dawned bright, hot and sunny. The P.A. system only seemed to work well for those few thousand crammed down the front of the stage but, minor criticisms apart, the occasion was deemed an overwhelming success. The organizers actually lost money on the day but artistically and from a fan point of view the event was so successful it opened a possibility to continue tradition next year.

The most funny event during the festival happened when a bass player of Touch swallowed a bee while performing onstage. The bee stung him in the throat and poor fellow had to be rushed to emergency room. To bassist’s amusement, Touch’s manager Bruce Payne announced to worried media crammed outside the van: “It was a touch and go but the doc says the bee will pull through.” 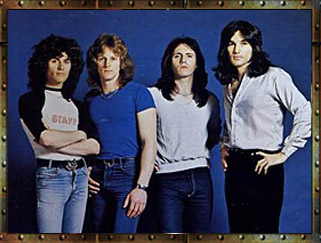 Touch – assaulted by a crazed bee…

Apparently all performances from the day were recorded. An LP and cassette was released consisting of two songs each from Rainbow and Scorpions and one from each of the other acts, except Judas Priest. Bootlegs of the show remain in the circulation. The Rainbow performance was filmed and shown on UK television in 1980-81 and was finally released as CD/DVD ”Monsters Of Rock – Live At Donington” in 2016.

Priest’s performance has been bootlegged and can be heard in great sound below:

Setlist was as follows:

Rainbow performed “Will You Love Me Tomorrow” the Carol King/Shirelles song (intended to be their next single) live, though it was never released. Donington show was Cozy Powell’s last with the band and vocalist Graham Bonnet also left soon afterwards leading to Rainbow unveiling a new line-up early next year.

It was a great day, the show Rainbow put on is still one of the best headlining performances at Donny…the first of its kind and a terrible risk.

It is now amazing to think, Monsters Of Rock was put together in mere three months.

Later on Monsters Of Rock was immortalised in Saxon’s song “And The Bands Played On” (from the album “Denim & Leather” 1981). Donington went on to become an institution and Monsters Of Rock was the biggest heavy metal festival in the world during the 1980’s and well into 1990’s. Overall attendance at the first festival in 1980 was 35,000. This was furthermore increased year after a year before safety restrictions were ordered in 1989 following two deaths during the Guns’n’Roses show in 1988 – by this point audience figures were topping 107 000. The limit had been reached. In 1990 the revamped event only allowed 72 000 people in and this enabled them to continue for few more years.

Festival was last held in 1996, nowadays Download Festival is organized at the same grounds.

While Monsters Of Rock returned later to Milton Keynes, the right venue for it has always been Donington Park. There even during the silent months without motor races or metal festivals taking place the echoes of the music can still be heard and felt, and one can still vision the sounds and scopes of the immortals when “the bands played on.”

Did YOU attend the legendary 1980 festival at Castle Donington? If you have any cool memories and/or photos you want to share with other Steel Mill goers, by all means post them below to the comment field! If you want us to add picturs to this articles feel free to send us email. Please add your name, description of any photographs and a short story of your experiences at the 1980 Monsters Of Rock! Let the flames burn higher!

Well, I guess I was one of the lucky ones. What more could I have asked for in 1980, it was a dream come true. To be a special guest at Donington and with such great names and some of my favourite bands I felt that Priest had truly arrived.

The day started with yours truly being very nervous, how would it go, would I play well? Would I break a string? Would my guitar stay in tune? My head was just spinning with excitement. I remember arriving in the artist’s car park and seeing familiar faces immediately: some kicking football, some talking to attractive girls, others just chilling and having a cigarette and a beer. I was amidst the rock giants of the time. 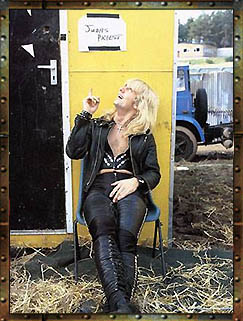 The sun was shining and everything looked perfect, the crowd of fans seemed to go on for ever, the thunderous applause for the bands one after the other gave me chills, although it meant that Priest had to come out fighting like never before.

The light started to fade. It was our turn, we hit the stage with a vengeance, and the whole place seemed to vibrate in time. After the first song had gone so did any of my nerves, it seemed we could do no wrong the fans were with us.

We played as good as we possibly could. Before I knew, it was time for the last song. I seem to remember it all went so fast, I wanted to keep playing. We had so many songs we could have played, but our time was up. We had to make way for the mighty Rainbow but the crowd cheered on.

This was England, this was metal, and this was Donington -the festival I will never forget. 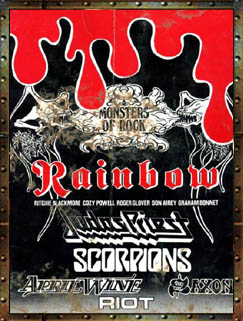 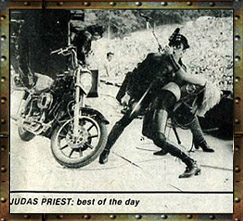 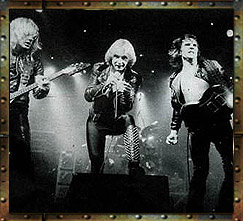