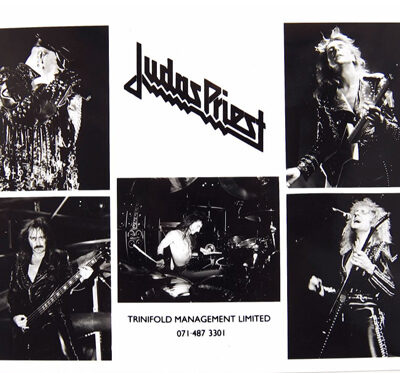 Birmingham and the Black Country has a musical heritage, which until now, has remained largely uncelebrated. That musical heritage is of course: Heavy Metal. The area has spawned many bands, whose importance and influence still stands today.

Packing the place out. Walsall 06.11.2008
(photo courtesy of Stuart Williams)

Although many bands have come from this central, industrial area of England, five of the most important have been chosen to set up this archive of Rock and Metal: Led Zeppelin, Black Sabbath, Napalm Death, Godflesh and of course, the Metal Gods themselves – Judas Priest!

Anything documenting the music of this region would be incomplete without featuring Judas Priest, with Rob, KK, Glenn and Ian all hailing from the Black Country area.

When I first heard of the exciting ‘Home Of Metal’ digital archive project in my home area, I knew I had to get involved. As a huge fan of all things Rock and Metal, coupled with the fact Priest were a featured band, I applied as a volunteer for the project.

Our aim is to collate fans, memorabilia, programmes, T-shirts, autographs etc. and add them to a digital archive for all to view and enjoy. In addition to this, we are recording peoples spoken word memories of gigs and events that have been important to them and their love of Metal.

First things first though – we really needed people to know about the project and how to get involved. We all pulled together, getting posters put up wherever we could: record stores, rehearsal rooms, live music venues, rock bars, music shops etc. Two memorable nights for me involved standing outside Wolverhampton Civic Hall (in the freezing cold), handing out flyers after watching Saxon and The Scorpions, and then after watching Motorhead. And cool gigs they were too!

A real bonus came when three of us were invited down to the Kerrang! Radio studios to talk about the project. Myself (to fly the flag for Priest), Duncan (to fly the flag for Napalm Death) and Lisa (one of the brilliant organisers) were interviewed by Johnny Doom, which was aired later that week. That reached out to a lot of listeners of Rock and Metal – the word was getting out there…

The Guys here at the Steel Mill were stars as well – giving the project a huge boost by posting the details on this very site. Cheers Guys! I’ve spoken with some people who first heard about Home of Metal on KK’s site.

To kick-start the archive, there has so far been two open days. The first, on Saturday 25th October, was held at Wolverhampton Art Gallery. The whole team didn’t really know quite what to expect. Nothing like this has ever been done before, so we didn’t know how many Heavy Metal Maniacs would be willing to come forward with their treasured possessions to be scanned, photographed and recorded (nothing is ever kept – we record or photograph, then return immediately to the owner).

We needn’t have worried however – as nearly 1000 people came though the doors on that first open day! Two hardcore Priest fans were actually there half an hour before the doors opened, their arms full of old programmes, tickets and photos! Jim Simpson (original Black Sabbath manager) and Digby Pearson (founder of Earache Records) took part in fascinating interviews with Johnny Doom from Kerrang! Radio. The stories they had to tell were amazing and really gave a different angle to the day.

By the end of the day, we were all buzzing with how the day had gone. I was now really looking forward to the next open event in Walsall, Rob Halfords home town. And I would not be disappointed…

Our second event took part at the New Art Gallery in Walsall, on the evening of Thursday 6th November. It truly was an awesome night, with the Metal Fans of Walsall turning out in droves. Even the local BBC TV news team were there to report on the project. A vast array of programmes and rare photos turned up, but the real treat was yet to come.

Sue and Nigel Halford (Robs sister and brother) came along, and Sue had been busy doing some serious digging around in various cupboards and attics. She arrived weighed down with various outfits from Robs fantastic stage wardrobe. Starting with robes from the really early days of Priest, through to Turbo and Ram It Down. This was real Metal history… and here it was, right in front of us!

As if that weren’t enough, Alex Hill (Ian’s son) came along with his Dad’s 1969 (if I remember the year correctly!?) Fender Jazz bass. After having the guitar photographed for the archive, he went on to show some interested fans the very same bass, being played by Ian, on the inside sleeve of Defenders of the Faith. It was of course, a vinyl copy of the album which we were using in a small exhibition of the bands’ rarities. Alex was then good enough to allow me to interview him about the bass guitar, his Dad and his own musical career. For the record, Alex has followed in his fathers footsteps. He has opted for 4 strings instead of 6 and is a great bass player himself.

What people have bought along so far has been amazing. The passion for Classic Rock and Metal is as great as ever. People of all ages have been attending and expressing interest in what we aim to achieve with this archive. It’s so cool to see parents who went to see Priest and Sabbath in their younger days bringing their kids along. And those kids are wearing Bullet For My Valentine or My Chemical Romance t-shirts. Without the Metal Heritage of Birmingham and the Black Country, those bands would not exist.

Ram It Down! One of Robs leather waistcoats. Walsall 06.11.2008
(photo courtesy of Stuart Williams)

So onto the next event, perhaps the biggest of the three, to be held at Birmingham Museum on Saturday 7th February 2009. That will be only one week before Priest play the NEC Arena, just outside the city. It’s gonna be a very Metal February, and I for one can’t wait!

The 2 links below are for Stuart Williams, a local historian and huge Metal fan (Particularly Priest!) He is also a keen photographer and I’ve used a few of his photos.