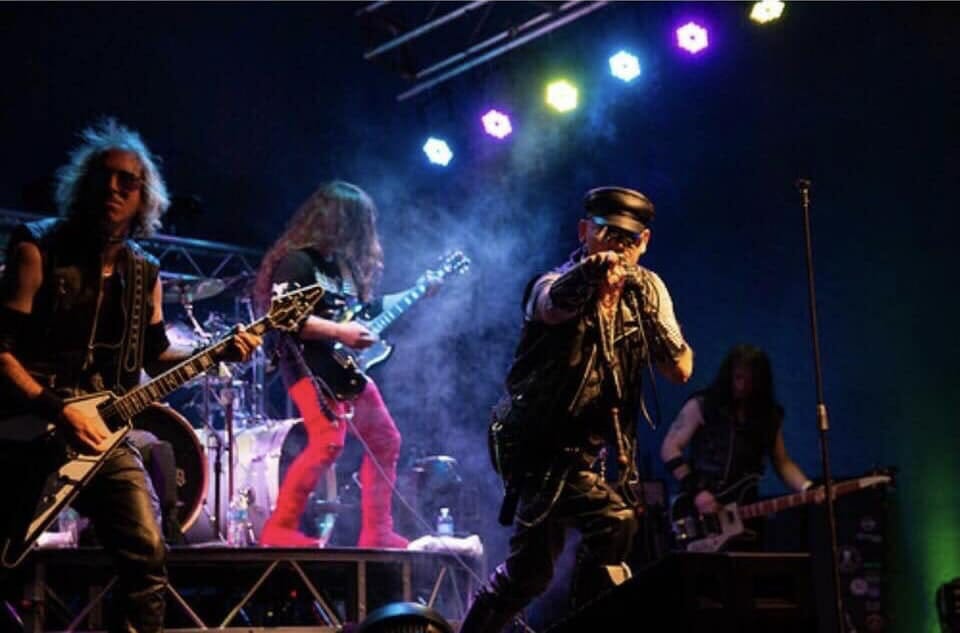 Judas Rising are leading the Northwest US Judas Priest tribute field with fierce and dynamic shows, strapped in leather from head to toe. Here’s their story and accolade to the greatest metal band ever.

First off, why did you start a Priest tribute band and what does the music of Judas Priest mean to you?

We started this Tribute to share the love we have for Judas Priest’s music with their fans in a live, high energy, stage performance experience. Judas Priest’s music is the essence and foundation of Heavy Metal. Every album conveys beauty, power, energy, unity and strength – both musically and lyrically. From a musician’s perspective, their music is heavy, soulful, aggressive, technically challenging, and a hell of a lot of fun to play!

We have been Judas Priest fans for most of our lives.

“I was fifteen years old when I received “Stained Class” and soon after purchased “Unleashed In The East”. From that point I wanted to sing like Rob Halford” Mark recalls. He has seen them fifteen times and was even fortunate enough to meet the band.

Rafe’s very first metal show was “Defenders Of The Faith” in San Francisco.

“In 1984 I was already a huge fan and delving deep into the entire Priest catalog, I had just begun playing guitar and cut my teeth by learning “British Steel” in its entirety. That “Defenders Of The Faith” -concert sealed it for me, indeed the Priest were The Metal Gods!”

Dave was enlisted in the US Military when his bunkmate introduced him to “Sad Wings Of Destiny”. 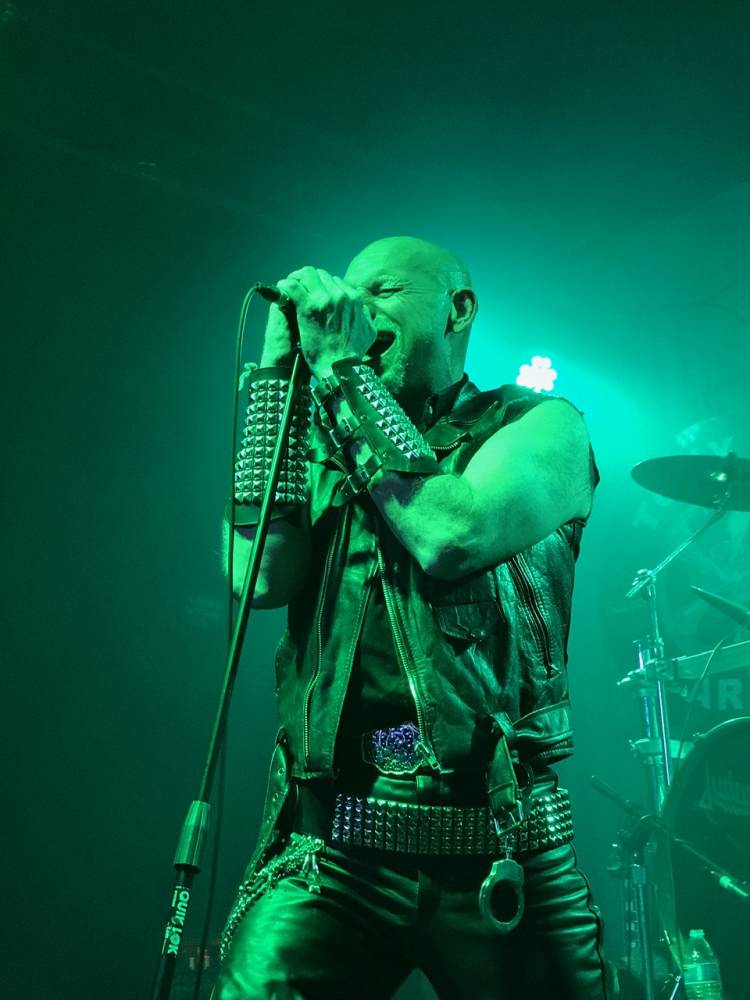 Mark: After I first heard “Unleashed In The East” I wanted to sing like Rob Halford. My cousin told me I could never sing like him. I worked very hard to prove him wrong, and back in the late 70’s everyone in the surrounding area knew me as the guy who could sing like Halford!

These days I run through the entire set in my home studio at least twice a week.

Individual practice and learning are integral for this band. Each member’s part is so important in Judas Priest, that for us to accurately perform the parts requires research, learning, and practice. We typically rehearse together as a band twice a week. Midweek we run the entire 90-minute set once through, and on Sundays spend a good four hours rehearsing the set and working on parts together. We all work full time jobs, so this requires a fair amount of discipline, energy, and support from family and other responsibilities.

What “gear” are the players currently using? 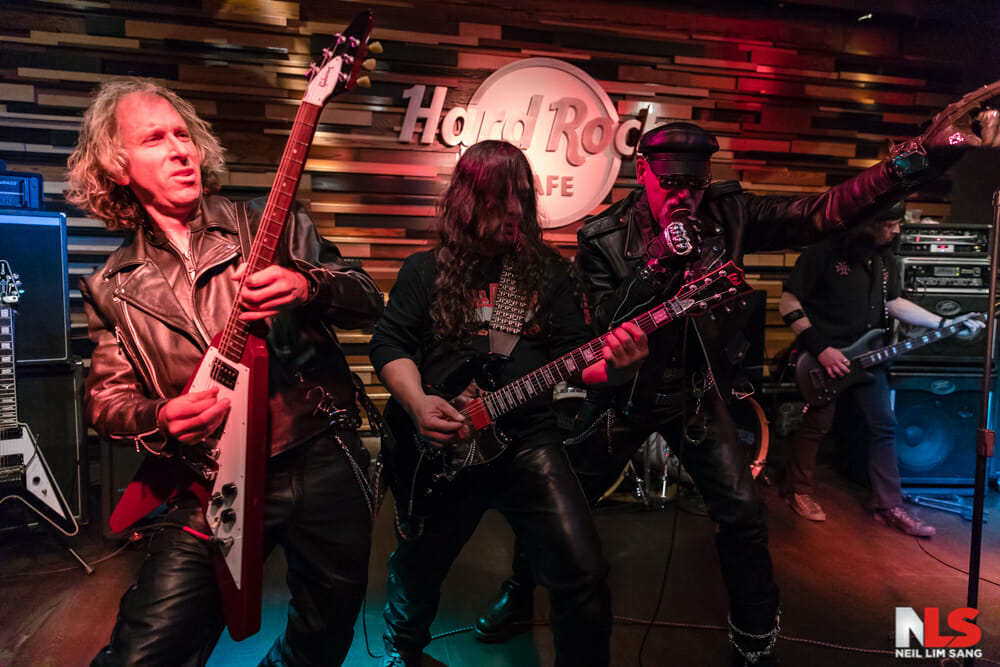 What’s up next as far as touring plans go for you guys and how much opportunities there are to play live? How would you describe the club scene in your area nowadays?

The Club scene in the Seattle area is strong, with a lot of Owners and Promoters excited about supporting live music. Audiences are coming out strong these days. Original and Tribute bands are very supportive of each other and are putting together great bills with excellent audience draws.

We have several American Indian Casinos in our area that book Tribute bands of every genre. We are fortunate to perform every six months at one of the larger, more popular casinos. Judas Rising is probably the heaviest music they are booking, as most Tributes are classic rock oriented.

We are currently scheduled here in several cities in Washington StateSpring 2019 with an early Summer jaunt into Oregon for a few shows there. Late 2019 will likely find us on a West Coast run with consecutive dates starting here in Seattle and working our way south for dates in Oregon, Northern and Central California, and Nevada. People in Salt Lake City Utah and Boise Idaho are excited to have us in their cities as well!

Our reach is stretching further away from home and we love that! We would love to perform at K.K. Downing’s Steelfest, that would be incredible!

What’s the hardest Priest song to play live? Which one took most work to get done?

This is a tough question because each of these songs require every mem-ber to really nail their parts to call a song complete. Interestingly “Beyond The Realms Of Death” has probably been the most challenging for the band as a whole. This song requires respect, dynamics, and discipline. Both Glenn and K.K.’s solo parts are outstanding and that includes the rhythm parts being performed properly to allow those solos to sing. What a great song! We have just begun working on some of the most technically challenging songs including “Painkiller”, “Exciter”, “Sinner” and a couple from the most recent album “Firepower”.

Your name resonates the Priest comeback album “Angel Of Retribution’s” opening track. Does that song hold a special meaning to you?

“Judas Rising” is a ripper of a song and we added ‘Northwest Chapter’ so that people were not confusing us with other U.S. Tribute bands of the same name ‘Judas Rising’. We encourage them to form their own Chapter in their respective areas!

The lyrics of the song “Judas Rising” do not mince words when it comes to the battle between good and evil here on this earth. In the context of this song, Judas despises us all and will betray and seek to destroy each of us at every opportunity. This is a terrifying reminder that evil never dies. So it is a very powerful song. On the contrary, the lyrics of ‘Angel’ from the same album call upon angles to ‘wrap sad wings’ around us to protect us against evil.

Judas Priest will forever be an important voice of Heavy Metal because they have never been afraid to address the topic of spiritual faith in heaven, angels, or demons.

Judas Priest never appears to favor or condemn one over the other like many metal bands do these days. Throughout Judas Priest’s catalog there are examples of this fight between good and evil, and it really makes for great lyrical content and storytelling. The images they paint in their music can be horrific, terrifying, and powerful; yet beautiful, motivating, and comforting. They are true storytellers and religion, spiritual, mystical, and historical topics are part of the story they tell.

If you could add any song to the Judas Rising set, which would it be?

We did record “Rapid Fire”, “Metal Gods” and “Breaking The Law” as finished demos when Mark, Mike, and Rafe first formed the tribute, and this was purely for networking in order to recruit a bass player and another guitar. It would be really cool to take some songs from “Rocka Rolla”, “Sin After Sin” and “Sad Wings Of Destiny” and perhaps put a modern production spin on them for sure.

We recently played a really fun show at On the Y in Sacramento, Ca. The place is so small that the band packs into this 12’x12’ room down a couple steps and off to the side and around the corner from the bar, no stage, and the crazy ass Metalheads are right in your face ready to friggin’ tear the place up. The goal is to turn up as loud as you can and blast your volume right out of that room, through the bodies and out into the bar area. It sounds like shit ‘onstage’ but it sounds great out in the crowd and that place loves their Metal! We stood in the parking lot before the show and rewrote the entire set tailored for this crowd. We literally witnessed flesh peeling off faces \m/ 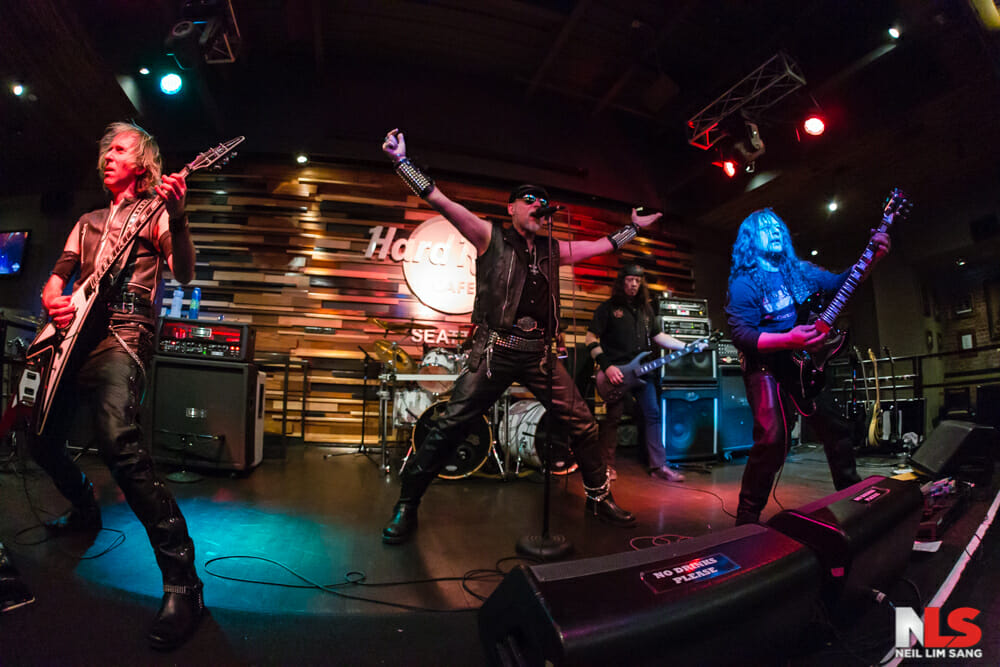 Are there any interesting “Judas Rising on the road” stories to tell?

Paul drives a Corvette daily like he stole it. We somehow decided it would be a great idea to have him drive our little tour bus down an Oregon moun-tain pass with plenty of curves. It wasn’t long before we realized that he thought he was in his Corvette! Just as we were telling him to slow down and take it easy traffic came to a complete halt in both lanes. Unfortunately, two vehicles a few miles ahead went Hell Bent for Leather and smashed up on the rocky mountainside pretty badly. We counted our blessings that night and relieved Paul of his driving duties at the bottom of the hill!

Have you ever seen other Priest tributes? What sets Judas Rising apart from other JP tribute bands?

We’ve seen some good JP tributes and on the web. We pride ourselves in remaining authentic by keeping the guitars true to K.K. and Glenn’s parts. You won’t see K.K. performing Glenn’s parts and vice versa in this band!

Judas Priest just hasn’t been the same since K.K.’s departure. Richie is a phenomenal guitarist and the recent album is amazing but we are really missing the live show. We feel with Glenn’s unfortunate battle with Parkinson’s, that Richie should assume Glenn’s responsibilities at stage left and that K.K. return to stage right; all working together to keep Judas Priest alive.

Furthermore, we really appreciate the opportunity to share our experience with you. We are having a lot of fun doing this tribute, and it is causing us to better musicians individually throughout the process. Judas Priest fans are the greatest in the world. Rock on and Keep the Faith!

Find out more on Judas Rising: