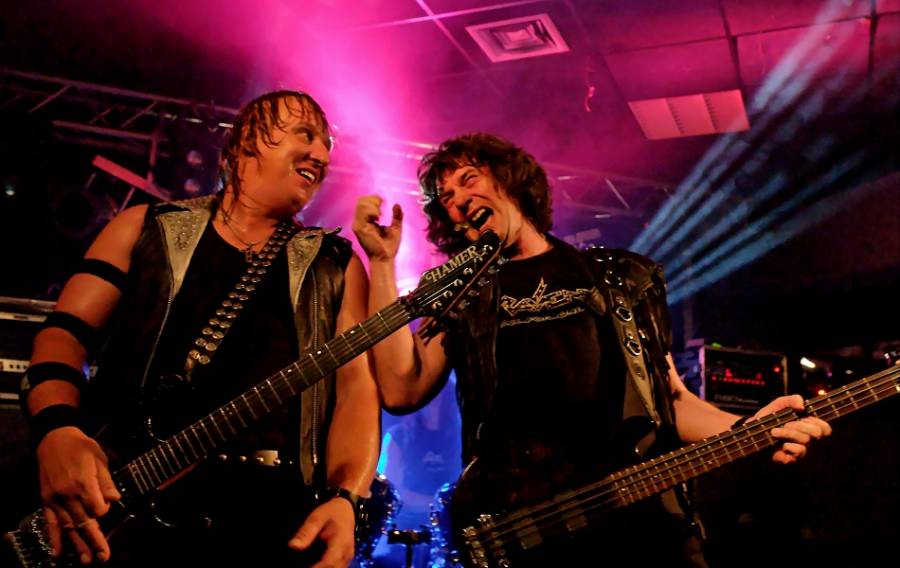 After well over four decades, Raven show no signs of slowing down. One of the originators of classic NWOBHM scene the band’s latest album “ExtermiNation” (2015) is as vital as anything the band released in the 1980’s. Yet they have red their own book of set backs as well. Heather Williams interviewed bassist/vocalist John Gallagher on Raven’s past, present and future.

In 1974 at Newcastle England, Raven was formed. Tell us how the moment went when you said to yourselves you were going to form this band. What were you doing at the time when this idea hit you?

Well, my brother and our friend from the next street, Paul Bowden (guitar) came up to me and said “we are forming a band..and you can play bass!” We only had one classical guitar between us but got cheap electrics that Christmas and moved forward from there. 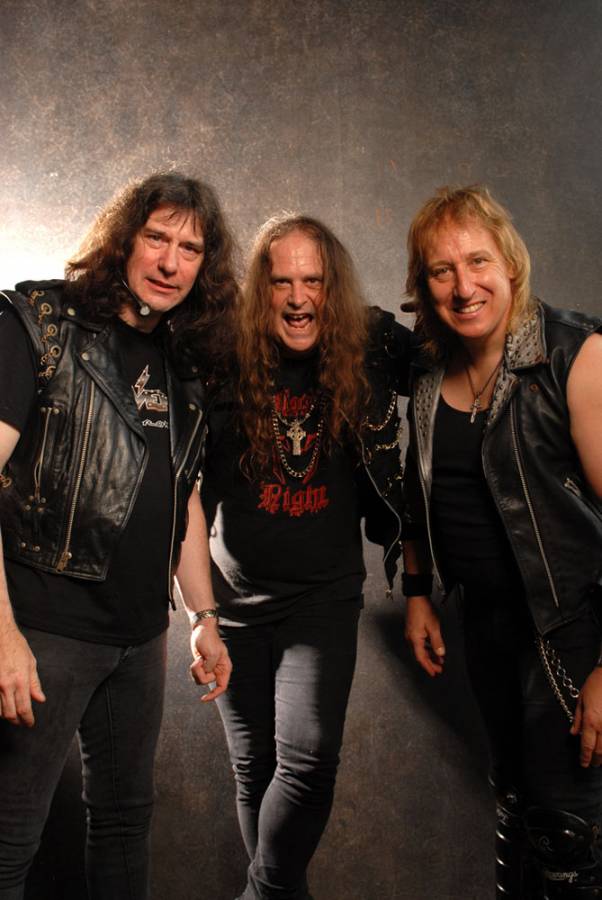 Where did you get the name Raven from?

We made a long list of horrible names, Raven finally got the vote.

Why has your music been referred to as athletic rock?

Probably because of what you mention in your next question…

Why did you guys take to wearing sports gear during shows in the early days?  Whose idea was it?

The gear looked good. It was cheap and looked different to the regular 1970’s rock star stuff local bands were wearing.

What was it like for you guys when you got signed to your first record label?

Pretty amazing. It was a different time, when things like that actually meant something.

What have been your main musical influences?

Stuff like Sabbath, Purple, Zeppelin…but really the early glam stuff that we saw on the few music programs that were on TV in the UK – Slade, Sweet, Gary Glitter, Mott The Hoople, David Bowie, Status Quo, Nazareth.

Looking back, how would you describe Ravens forty-one year career?

Extremely long! It’s pretty astounding isn’t it? And we are nowhere near done yet.

It’s said your sound is rooted in British hard rock and progressive rock. Have you guys ever had any metal influences?

We got into Sabbath, Purple, Budgie, then basically saw every rock band that came to Newcastle. That was our education really.

Ok, where the hell does all your energy come from? Since you first started, you guys have been nothing but a power packed energy ball, and your latest 2015 release “Extermination” is absolute proof you guys have not slowed down a bit! Are you guys ever going to retire?

No! We are just getting started. It’s a great time for us and we have such great ideas for the next album already. The energy is natural, it’s the way we have always done it from day one.

Joe Hasselvander has been drumming for Raven for 29 years. Looking back at past line-ups, the other drummers stayed one, two, and seven years at the most. What’s been the magic sauce in his long running tenure with Raven?

Joe is one of the best drummers out there period. But the reason why we are still together is because we get on as personalities. We are very much a team. Joe contributes music all the time and is a killer guitar player as shown on his solo albums.

Did the sign on with Atlantic Records earlier in Raven’s history have anything to do with the change in sound on the “Stay Hard” and “The Pack Is Back” albums?

Atlantic were involved in the “The Pack Is Back” album which is why it’s way more commercial. “Stay Hard” was recorded before we had the deal with Atlantic. The only input they had was they wanted a cover of “Hard Ride”.

What was going on at the time “Glow” was made? The album definitely has a “far-out” feel and sound to it. Very opposite from the old school, heavy, thrashy sound of past albums. That was a bit out of character for you guys wasn’t it?

Far out? It’s heavy and a bit experimental. I had a mind-set of avoiding many of our stylistic “quirks” so many of the riffs were different. We even did a ballad. There was no pressure so we just did what we wanted. I think the album is an overlooked gem, such cool songs on it.

The studio where “Glow” was recorded in was literally connected by a strip club. Any wild stories to tell about that one?

Well, it was difficult getting Mark (Gallagher, guitar) and Joe back in the control room to hear mixes I can tell you!

In 2000, a wall collapsed on Mark crushing his legs. Raven was in hiatus for four years while he was rehabilitating from that accident. In 2004, you played some shows while he was in a wheelchair. What was that experience like? It seems like it would be difficult playing guitar in a wheelchair. But knowing how crazy you guys are I certainly wouldn’t put it past you!

That was tough. Mark had just had some operations and still had anaesthesia on his lungs. So occasionally he’d throw up on stage and just be nauseous in general but he wanted to get out and prove he could still do it. He actually played amazing on those shows as he had to stay in one stop.

I want to know what separates “ExtermiNation” apart from all your other releases. “ExtermiNation” is simply one of the heaviest, most kick-ass album you guys have ever recorded in my opinion. I have never heard you guys so alive in this album.

It was just the stars being aligned, the right songs and right arrangements. We spent a LOT of time on that. That’s really the difference. We recorded pretty much the way we always do, live with the three of us in the same room, no click track. And just add and fix stuff as we go, but the initial basic tracks are live and real. Keven 131 did a killer job getting it all recorded and provided the perfect mix. We are very happy with the way it turned out.

Are there any plans for more albums in the future?

Yeah we aren’t opening a bakery or anything. It’s what we do. Probably early next year.

In 2015, while performing in South America you guys were in an earthquake measuring 6.2 on the Richter. What was that like?

Scary. We were in Bogota on the 9th floor of a hotel when everything started moving from side to side violently. We ran down nine flights in record time. Luckily there was no damage as the epicentre was about 150 miles away. But it was scary.

We did the 70 000 tons cruise which was a big success for us. South America, then Euro festivals, then some USA dates and more Euro dates. In 2017 we are looking to do one of the rock cruises in January, then USA dates, Euro dates and festivals. Also working on Asia and Australia. In between, we are writing for the next album.

Please tell us all the sites we can check out to see more about what’s going on with Raven.

Thank you for giving your time for this interview.  We want to see more of Raven in the future!  You guys show no signs of slowing down, so I’ll keep the faith on that one!

Cheers and thanks to the fans – see ya soon!

To find out more on Raven and upcoming tour dates go to: