There’s obviously something special about Shiraz Lane, a young band playing hard rock in the spirit of such 80s legends as Skid Row, Guns’n’Roses and Hanoi Rocks. These five Finns in their early twenties have already taken huge steps during their short history: showcase gigs both in Toronto and Tokyo, as well as an appearance at the legendary Wacken Festival. Recently, the band inked a record deal with Frontiers Music, and released their debut album ‘For Crying Out Loud’. Steel Mill had an opportunity to have a chat with vocalist Hannes Kett just when the band was getting prepared for their first European tour, supporting fellow Finns Lordi. 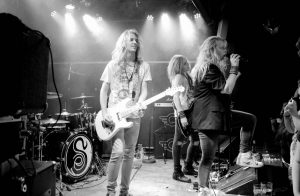 Let’s start at the beginning. You guys have had quite a rapid rise from garage to widespread awareness. How did this all start?

Well, it all started in 2011, when we had our first gig. It’s been a lot of hard work, both training and gigs. In the early years, there were some lineup changes, but when Joel Alex took up the bass duties a couple of years ago, things finally seemed to click. It’s fantastic to work when the chemistry and the atmosphere within the band are great. 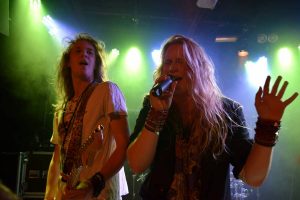 How did you find your style? You are way too young to remember the actual hayday of this sort of music…

This is the music that really touches my soul. I was kind of saturated with hard rock during my younger years, since my father used to play lots of good stuff at home. I remember Deep Purple’s ‘Burn’ being in heavy rotation in our house, as well as Queen and other cool stuff like that. It just feels so natural and right.

You’ve often been labelled in the same 80s hard rock category as Mötley Crüe, Skid Row and Guns’n’Roses, but are there any other influences than these obvious ones?

Yeah that’s true, we’ve often been compared to these legends, and I do understand that quite well. All those bands are huge, and there’s no denying that some of them have had a big influence in our music. It’s just when you grow older, and learn more about music, you want to dig deeper. You want to find all kinds of great bands, and go back in time to the point where it all started. It feels natural to go back to the time when music was real and raw…

In the modern days of ‘studio magic’, many bands seem to forget what it is to be real and authentic. That’s the thing we’re aiming at, we try to be real, play full on live shows without any backing tracks etc. That’s our thing, we wouldn’t do it any other way.

We had our first records, or demos, as we call them now… well, actually, I can’t remember the exact dates… The first one has to be somewhere between 2011 and 2012, followed by the second one a year later. Our first proper ep ‘Be The Slave, Or Be The Change’ was released in 2015, although the songs were mostly written in 2014. After that we started to receive global recognition… 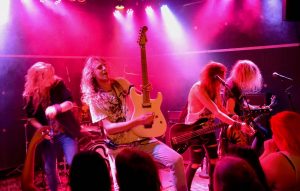 Yes, that competition was a milestone for us, because it also brought a very important new member to the band, our manager Heta Hyttinen. The amount of work she has put into this band is just unbelievable. Actually, she’s not just our manager, she’s also our dear friend and a real mother figure for Shiraz Lane.

All that gave us extra boost, and a chance to step onto the next level. The more you get, the more you want. After the first gig, we wanted to play in bigger pubs, then rock clubs, then gigs abroad and now we’re heading for our first European tour. Maybe next there will be a world tour, that’s the way it goes. You have to want more if you want to have any progress.

Yes, that was the prize, and then Heta came along, as well. We got many new friends over there. That was actually not just our first gig abroad, but also the very first gig outside our hometown, Helsinki. Not a bad start…

And Toronto was followed by Tokyo?

Yes, Japan has an unbelievable culture, you can’t explain it, if you haven’t been there. The first couple of days, we were just marvelling at all the sounds and lights around, we felt like our heads would explode, but on the third day we got used to it. And when we got back to Finland, we couldn’t understand how it could be so silent and calm here… 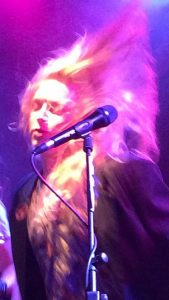 One could say that you were sort of rookies when you played at Wacken Festival. Were you guys nervous at all before entering such a legendary stage?

No, not at all, we just wanted to have more! The bigger, or better known the band gets, the more you have to work. Nothing comes for free. So it’s everybody’s duty to acknowledge that fact. We have worked hard, but that’s not enough, if we want to go further.

You do have an extremely strong working ethos. Tonight you play a gig here in Hämeenlinna, Finland, and after a few hours you’ll be on your way to Germany where your tour starts.

Yes, we’ll be extremely busy, but we always wanted to have a proper tour, and now it’s happening. We’ll enjoy every minute of it, and do what we love the most, play live.

You’ll be having almost two months around Europe ahead of you, opening for Finnish shockrockers Lordi…

Yes, the tour starts in Germany tomorrow, and then our caravan will be here and there. The tour ends for us in the UK, where we’ll be playing eight nights, ending at O2 Islington Academy in London, the 20th of November. It will be awesome!

Just checked your upcoming schedule, it seems quite tight. How do you think life will be like on a tiny tour bus?

It will be great, I’m sure! I share a flat with our guitarist, and the drummer shares one with our other guitarist. On top of that, our bass player lives just a stone’s throw away, so we see each other almost every day! Our band is like a family. Of course, there will be some minor things, like in every family, but, basically, we are just five apes that fool around and get along great!

So, what can be expected, if some of our readers will come and see the show?

There will be plenty of genuine live rock’n’roll, something that’s not so common anymore. 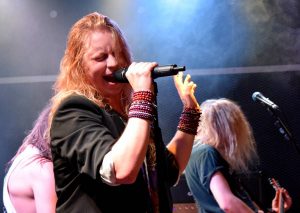 About writing, who’s in charge?

We all are. That’s the point, I think, and that’s why there’s so much versatility in our songs. What comes to the lyrics, I write most of them, mainly because as the vocalist I need to feel comfortable about what I’m saying. It’s hard to sing lyrics written by someone else. Basically, the process begins with one of us having a riff or a melody, I sing it, and then we start to jam. Usually, the song takes its final form through intensive jamming. 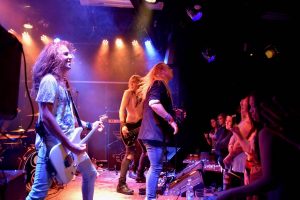 As mentioned earlier, you’ve been labelled as a modern version of legendary hard rock of the 80s. How much do you think about this when you write music?

Not at all, we’re not thinking about that. For example, I’m not a Mötley Crüe fan at all, although my friends call me Vince… ‘Doctor Feelgood’ had its moments, but the album they did with John Corabi was their best, I think. We try not to think about any genres while we’re writing, in that way you only put yourself in a box. That’s why there are so many colours and so much dynamics in our songs.

This interview will be on K.K. Downing’s website. How do you feel about Judas Priest?

Definitely a great band! We saw Priest last year when they were in Finland. I, especially, wanted to see them, it was a classic act, indeed! Still delivering the goods!

So, it’s time for our last question. Where will Shiraz Lane be five years from now?

We’ll be on a world tour, with two more albums under the belt. A bit bigger act than today, I hope. We’re now just taking the first steps, but that’s the foundation to build on! Then all our fans will have a chance to see us, we already have loads of requests coming from all over!