AC/DC-legend Bon Scott would have turned 70 this July. His legacy however lives on, not least in the songs still heard live today. Here’s a look at man who started it all: Bon Scott, the mischievous and wild vocalist.

Ronald Belford Scott was born in Forfar, Scotland 9.7.1946 and lived first five years of his life in Kirriemuir. In 1952 family immigrated to Australia, where Bon formed his first bands during the early 1960’s. He replaced Dave Evans as the lead vocalist in AC/DC in October 1974, and already by then Bon had over 10 years of experience touring and recording with various outfits.

“He had a bottle of whisky and some dope, and he polished it all off. I said to Mal, “If this guy can walk, let alone sing, this is going to be something, but he walked on and just ripped it up.”

Bon debuted on albums ”High Voltage and “TNT” during 1975 and after couple of years AC/DC had achieved superstadom. Success didn’t come easily and press was downright hostile towards the band for many years. Infamous Rolling Stone reviewed “High Voltage” album after its release in the US and the tone of text speaks volumes about the attitude towards the group at the time:

Those concerned with the future of hard rock may take solace in knowing that with the release of the first U.S. album by these Australian gross-out champions, the genre has hit its all-time low. Lead singer Bon Scott spits out his vocals with a truly annoying aggression which, I suppose, is the only way to do it when all you seem to care about is being a star so that you can get laid every night. Stupidity bothers me. Calculated stupidity offends me.

If Bon Scott cared about these reviews, it didn’t show in his performance nor in his lifestyle: “Alcohol, bad women and food, sweat on stage – it’s all good and keeps me in shape” was his often heard motto.

Hey Satan paid my dues, I’m on my way to the promised land 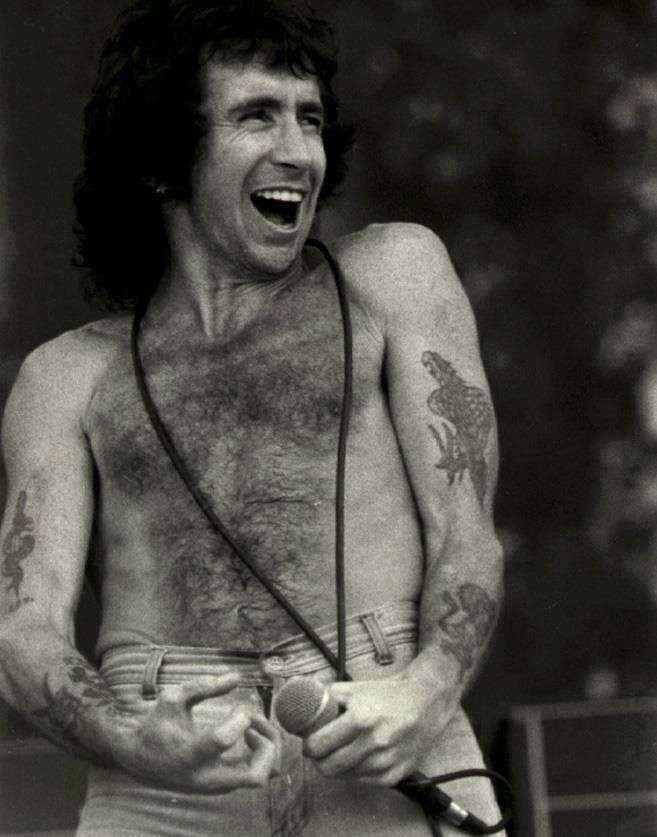 AC/DC front man lived his life on the way to the promised land, 1979’s Highway To Hell was a gate to success and he was passing through it when the reaper came to collect the man on 19.2.1980. Producer Mutt Lange, who got his fair share of gold and platinum later with Def Leppard, was responsible for “Highway To Hell’s” sounds and it was a commercial breakthrough. The album reached top-100 in the US and it seemed like time was right for the band and Scott.

During their final tour together, rest of AC/DC were beginning to show concern for their vocalist and his wild lifestyle. Bon was continuously in bad shape, either drunk or sleeping it off somewhere. The constant entourage of women had to hold him up many times. The new decade dawned on Scott while the man resided in his home Australia, coming back to UK in January 1980. Although singer’s drinking was spiraling out of control, he was genuinely excited about the new material Angus and Malcolm Young were preparing. Bon popped by studios one day to play drums and heard snippets of riffs that would later form songs “Let Me Put My Love Into You” and “Have A Drink On Me.”

It all came to a rough and sad end after a heavy night of drinking when Bon passed out in his friend’s car and was found dead in the morning. Much like his life, his death has been shrouded in different facts and mysteries. Scott was only 33 when he died yet much older than rest of the band with Angus Young especially looking like he could be Bon’s son. Scott’s cause of death was determined as internal organ failure with temperature inside the care dropping below zero also having an effect. Some medical claims stated his inner organs were in the shape of a 60-year old man, despite him being half that age. Scott was cremated and his ashes buried by the family in Fremantle, West-Australia.

If you want blood, you got it

Bon Scott feared no danger and often said to Angus: ”Whatever I do, do not follow”. Vocalist once climbed up to stage rafters and jumped down from 40 feet miraculously remaining unharmed. Another time Young brothers told Bon walked through customs wearing nothing but jeans and found his way to the gig in the evening by following fans to a train. Aside from numerous women, Bon was sought after by the biggest, most dangerous fighters in the pub or arena, mostly looking to start up a brawl.

Scott often arrived to concert venue right at the last moment, juggling between fans and troublemakers. He never said no to parties and women, and these offers kept coming every day and every night. 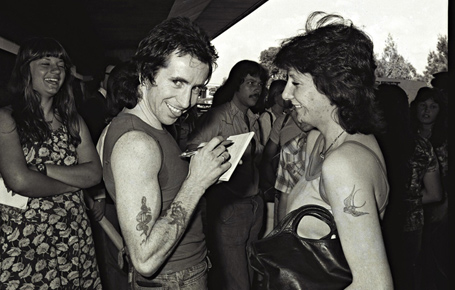 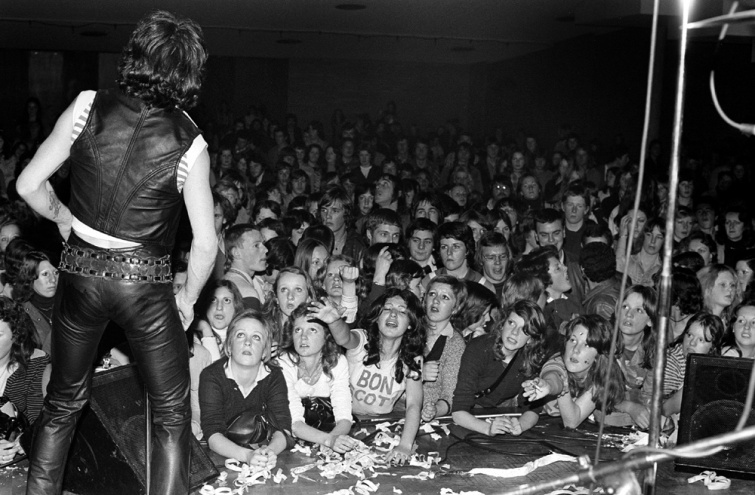 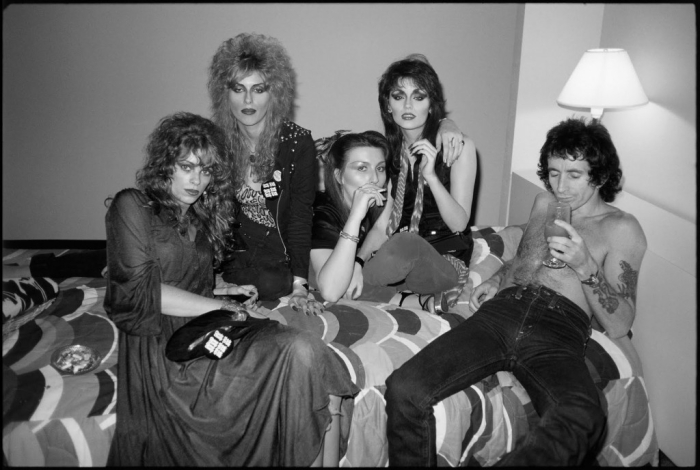 I been around the world, I’ve seen a million girls

Bon Scott not only sang about life, he lived the life of his songs, filled by women, alcohol, substances and parties. His charisma was natural and like many other rock stars, his rough looks didn’t scare females, but instead drew them in like moths to a flame. Scott knew his manners and many were in awe at his ability to charm women of all ages, from teenagers to elderly ladies – even though the first thing they witnessed were his many tattoos and missing teeth.

You got the dollars in your eye, always chasin’ that pie in the sky

AC/DC’s 1970’s era material was very strongly related to Bon’s own personal experiences. Scott wrote the lyrics and they strongly reflect his sense of humour and way of life. “Big Balls” and “Whole Lotta Rosie” – latter based on the rendezvous with Tasmanian prostitute – reached listeners because they were honest tales. Bon sang about the world and life of working class. He was a lot like Thin Lizzy’s Phil Lynott in his storytelling, albeit Lynott’s romantism was replaced in AC/DC with something far grittier and realistic touch. Instead of love we got only clap and anthem “The Jack.” Songs like “Down Payment Blues” spoke about unemployment and possibly Scott’s strongest statement “Ride On” brings grown men to tears up to this day.

With AC/DC, Bon Scott recorded six studio albums in as many years and nearly 60 songs. Not every one of them was a masterpiece but they are so strongly tied to vocalist’s personality, and thus belong eternally to jukeboxes, dusty and dirty karaoke bars and vinyl players all over the world. His writing didn’t go down in quality as albums progressed and the final record “Highway To Hell” with tracks “Beating Around The Bush” and “Girls Got Rhythm” are in their own class, both lyrics and vocal performance. Despite his ongoing problems, Bon ended his road in studio in great style. 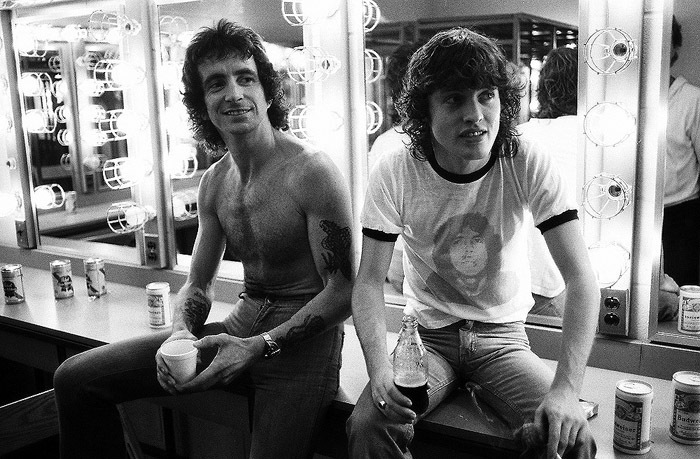 Brian Johnson joined the band few weeks after Bon’s funeral. Scott’s father had approved AC/DC’s decision to continue with new vocalist and Brian had been one of Bon’s favorite singers when Johnson performed with his previous group Geordie. With their new frontman the band released one of the hard rock and heavy metal’s biggest albums “Back In Black,” which was entirely a tribute to Bon Scott. The album sold 45 million copies and songs like “Have A Drink On Me” must have brought a smile and raised glass from Scott residing at the fiery gates somewhere above – or below.

In 1997 AC/DC released five CD box set ”Bonfire” as a remembrance for Bon Scott. Included was plenty of rare material and remastered tribute album “Back In Black.” Soundtrack to “Let There Be Rock – The Movie” recorded In Paris displays Bon’s charisma perfectly. He would also leave enough room for Angus Young’s acrobatics and soloing in just right spots and always sing along rhythm. 12-minute “Bad Boy Boogie” and 9 minute “Rocker” are amazing to hear still to this day. This box set is arguably one of the best there is, so if for some strange reason Bon-era AC/DC is not yet familiar to you, check it out. It is a remarkable look at great vocalist’s days of glory.

Many feel AC/DC wasn’t the same after Scott’s death and the well-oiled machined from the last few decades is certainly very different band compared to the old days. Especially now that only Angus Young and bassist Cliff Williams remain from the Bon-era line-up. Williams recently announced his impending retirement after current “Rock Or Bust” – tour, so the story of AC/DC is inevitably reaching its end. It is important to remember, it is also a story never written without the crucial input of Bon Scott.

Although Bon Scott’s life ended way too soon, he lived it full and in relatively short time created legened and massive machinery called AC/DC which carries on his legacy to this day. Bon had privately talked about his plans of doing a solo album and eventually retreating to farm life in Australia, starting up a family. Had these plans ever become reality, if he had lived, we will never know. It is now a proper time to turn our looks from the past to the present, raise a glass to the singer and toss a coin to the dirty jukebox. Will the first sounds played belong to “Let There Be Rock,” “Whole Lotta Rosie,” “Problem Child” or “Hell Ain’t A Bad Place To Be,” is every fans own positive choice. Myself, I picked the song which pictured Bon’s life even before AC/DC and the road he travelled steadfastly through hills and rocks until success eventually took him all the way to the grave.

”That’s how it goes playin’ in a band, It’s a long way to the top, if you wanna rock and roll.” 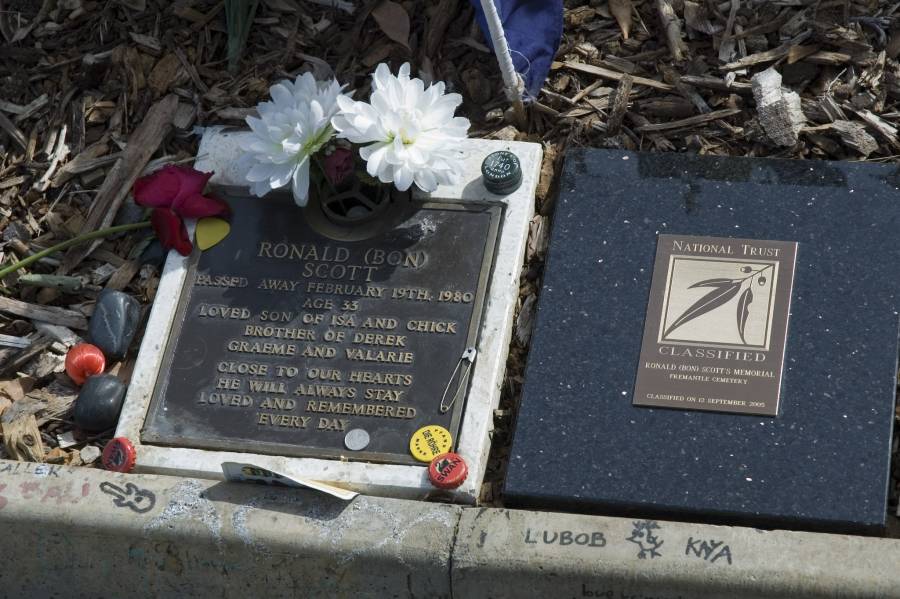 Here are some of the best performances Bon Scott gave as frontman of AC/DC. Included is his last television appearance in February 1980, lip synching to “Touch Too Much” in Top Of The Pops, two weeks before his untimely death: