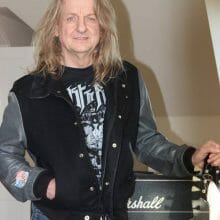 I sincerely hope and trust that you are all well,I just wanted to touch base to give a special thank you, especially to everyone who has acquired and read my book “Heavy Duty” Days and Nights in Judas Priest, I have to say how appreciative I am for such a great response to the book. The book is just now being released in Germany and soon hopefully Italy will be added to the growing list of countries that will release the book, I very much hope also that a Spanish version may also be released in the future. If anyone would still like to receive a signed and personally dedicated book, please go to:

I just listened to a really great track called “The Way” from Rippers new band “A New Revenge” with a true star line up from bands like Ozzy, Alice Cooper, and Scorpions, I can’t wait to hear the album, which I believe is release next week.

When I heard about what had happened to “Dave” (Holland), I was immediately in a state of disbelief. I hoped that he too was not being subjected to the same misdemeanour that I, Ian, Rob, and Glenn had also been through in our court case in Reno Nevada in the late eighties – the long and short of which was that two dysfunctional families and various ambulance chasing lawyers were simply out to get rich quickly at our expense. It seems that through the course of time new information has come to light that kind of gets one thinking yet again about the mysterious and seemingly instant way that Dave (Holland) was convicted for a crime that apparently was a failed attempt, and not even a crime that was actually committed, whatever the case I invite you to read this report seems to have significant importance:

Speaking of Ozzy ,what a great shame that he has had to cancel his European dates especially as Priest were meant to be in support, however all being well the dates are to be rescheduled for later in the year, I am sure that you will join me in wishing the great man a very speedy recovery as Ozzy and Priest together would certainly be one not to be missed for sure.

As always I wish you all a great Rock/Metal festive season!
K.K.